If you’re expecting this to be an advanced maths question, you’ll be disappointed. It’s almost certainly simple trigonometry, I just seem to be having brain freeze.

Start with a circle with radius R, we’ll call this circle Parent.
Given a number N, make a ring of N circles (Children) on the inner edge of Parent, such that all these circles touch the edge of Parent and touch their (two) neighbouring Children. What is the radius, r, of the Children?

You’re basically describing (beyond n=2) an n-gon of sides 2r and if you extent the line from the center of the construct through each subcircle’s center point (center to sub-center distance A), the exterior point describe a congruent n-gon of center-lines A+r=R circumscribed by a circle of radius R.

Of course, it’s been over 40 years since I’ve had to do trig so I may be way off…

Even without much complicated math you can tell that this is false. If N is extremely large the small circles will form a ring that is very close to outer rim. The big circle has a circumfrence of 2pi*R, while the small circles trace out a polygon with perimeter of N*2r. So for very large N r is approximately R/(pi*N).

Thanks, but I think I lost it already at this point. Is this the triangle? 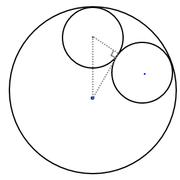 If so, then sin of this angle looks to be opposite / hypotenuse = r / A, which are both unknowns.
I’ve written a sketch in processing and tried different interpretations of your description, but none work so far.

We leave the rest as an exercise for the reader, as my textbooks used to say…

And… Stupid errors doing math was why I never excelled in higher math. That and losing negative signs halfway through…

Thanks guys, it’s working now.
Below is the code for a Processing sketch that illustrates the algorithm (press any key to increase the number of child circles). I couldn’t find a site for running processing sketches online. It’s essentially the same thing as Java though.