Meaning of symbol? (Pic in thread)

I was given a purse that has some symbols on it: peace sign, yin-yang, etc. (Yes, it’s very hippie.)

But there’s a prominent symbol on one side that I vaguely recognize as a letter (word?) in a foreign-to-me language.

I’d like to know what it means - can any of y’all help? I don’t want to inadvertently offend, and I prefer to be less ignorant in general. 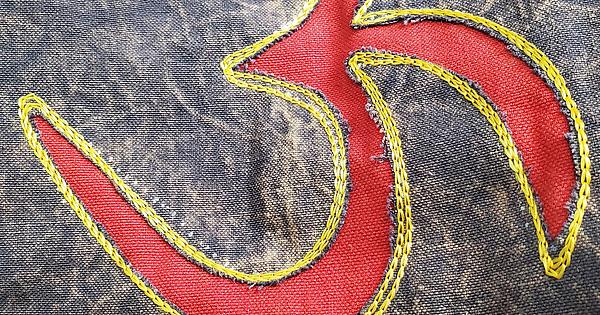 I recognize that as the OM or aum symbol in yoga practice.

“Om” symbol. (Got the answer using Google Lens on the photo.) Pages for logged out editors learn more Om (or Aum) (listen (help·info); Sanskrit: ॐ, ओम्, romanized: Ōṃ) is a sacred sound, syllable, mantra, or an invocation in Hinduism. Om is the prime symbol of Hinduism. It is variously said to be the essence of the supreme Absolute, consciousness, Ātman, Brahman, or the cosmic world. In Indic traditions, Om serves as a sonic representation of the divine, a standard of Vedic authority and a central aspect of soteriological doctrines and practice...

It’s a ligature (O+M ), not really an individual letter per se

ओम्<BR>ind. <BR> 1. The mystic name of the deity, prefacing all the prayers and most of the writings of the Hindus.<BR> E. अ a name of VISHNU, उ of SIVA, and म of BRAHMA; it therefore implies the Indian triad, and expresses the three in one. <BR> ...

I don’t want to inadvertently offend,

There is nothing to be offended here.

The whole concept of symbols is Western. Like since Christians have the Cross sign, they went looking for signs in other religions that maybe equivalent of the cross sign. Signs are not inherent to many religions

Yes, I have a photo I took of a small swastika chiseled into a step leading to the Potala Palace.