Men competing against women in the olympics

There has been some discussion about transgendered people competing in women’s classes, but I don’t want to discuss that.

What I am wondering is a hypothetical about how much of an advantage men have over women in the olympic events. If a man for some reason was allowed to enter the women’s class of every olympic event, how many gold medals could he win?

Also, who would be the ideal athlete for this? Someone like Usain Bolt maybe?

Unless I’m misunderstanding your question.

Granted, in some instances, even young male teens (such as the Under-15 boy’s teams) have crushed players like the adult U.S. women’s national soccer team in soccer scrimmages, but again, those boys aren’t average; they’re highly trained soccer players.

Clearly Caitlyn Jenner, had she transitioned before 1976, would be the extreme example. She would likely have won even more gold medals at the 1976 Olympics.

He would certainly not win every event, but maybe he could win a couple more than just 100m. My question is how many could he (or some other athlete) win.

Let’s use Usain Bolt (and I can’t think of who would be better, although maybe Michael Phelps or LeBron James):

All running events, except marathon - Bolt wins.
Tennis - probably not. The pro woman wins.
Golf - probably not, the pro woman wins.
Archery - no way, the woman wins.
Figure skating - woman wins for sure.
Table tennis - woman wins.
Basketball - the man miiiiiight win, if he relies solely on layups, using jumping ability, etc.
Soccer - this is too much of a team sport, but the guy miiiiight be able to outrun female defenders.
Volleyball - I think the woman can still spike, place the ball too well for Bolt to defend against.
Rowing - a strong man would probably outrow a pro woman.
Equestrian - I have no idea
Shooting - woman wins. You don’t become a good shooter on short notice.
Curling - woman wins.
Taokwondo - woman probably wins, because this isn’t about strength but skill
Water polo - no idea.
Field hockey - I have no idea, but if it’s about finesse and skill, the woman probably wins
Weightlifting - woman probably wins. She’s trained and this isn’t something even men can do casually
Boxing - a strong untrained man might beat a trained, smaller woman

I can speak to equestrian-- all events have both men and women competing in them. Sex is no advantage.

Yes, but I believe the OP is asking about an untrained man competing against a trained woman.

Well, untrained in that particular sport. You could also imagine Usain Bolt actually training for these events, but he would have very little time to train for each.

So it would be more like just learning the basic skills of the sport.

The olympians who have won the most medals in a single games have been swimmers for many decades, because there are many swimming events, and they aren’t different enough from each other (the way, say, different running lengths are) that athletes are overly specialized.

So, as a rough approximation, the best male swimmer would win twice as many (or more) medals if he could also compete in the women’s swimming events, and he’s already trained to swim in the many swimming events. I expect he would not manage to medal in any non-swimming event.

What about bmx racing? Could Usain Bolt have won that with some basic competence?

Usain Bolt is not really likely to excel in events that take any kind of endurance. I wonder if he’d even win any of the running events that are 800m or longer.

One of the fundamental ways to run faster is to practice running further at top speed. I’m sure he’s not just running 100 meters over and over trying to get faster. Longer distances would also be part of his training. My guess is he’d still stand a good chance.

all events have both men and women competing in them. Sex is no advantage.

Yet as a curiosity, Julia Krajewski (GER) is the first woman ever to win the individual eventing Olympic gold. Placings at CCI events (Concours Complet International) are gender neutral.

As to the sex, or lack of sex, status for the horses, am not sure easily accessible records are kept.

So he’d get 7 gold medals (above plus the heptathlon). I’m out of time to see how Dressel does against the women.

Bolt will mostly train on his starts and over 50m or less. And the gym. You can’t run faster than you can swing your arms. It’s about getting out of the blocks quickly, getting into stride, getting to top speed.
Then for Bolt it is 40m in top gear and 30m of showboating. Bless him.

I doubt he ever run a 400m, except as a warm down jog once he was established as a pre-eminent sprinter.

If the 800m was just jog 700 and sprint home he’s win in a canter the Olympic final.
But it’s not. There are changes of pace. There’s physical contact. There are other runners in your lane. There are tactical decisions. Hell, you barely need to actually breathe during the 100m.

If the 800m was just jog 700 and sprint home he’s win in a canter the Olympic final. 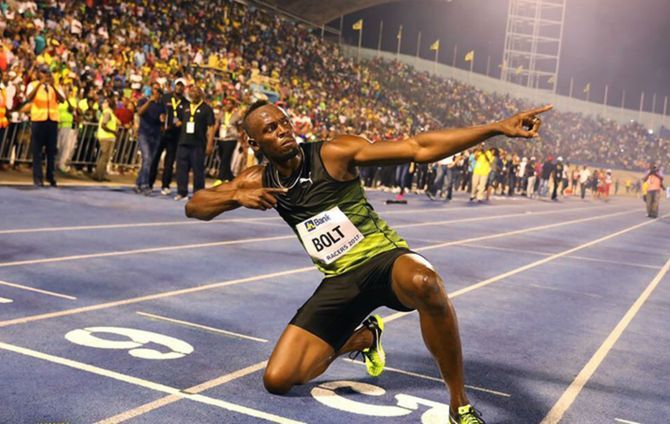 This discussion seems like a better fit for the game room. Hope that’s okay.

He has tried a career in professional football which must have been some cause for the opposing wing-backs. 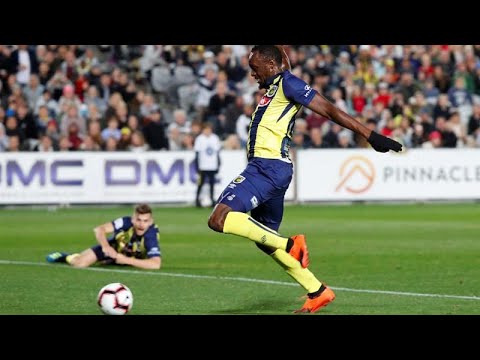 Oh, I agree. But the OP basically asks about taking an existing athlete and dropping him in other events without specialized training.

Here’s Bolt running the 400m at High School (age 15). Pouring rain as well.
Basically 2+ seconds under the Women’s world record (which has stood since 1983 as an ‘East German drug-assisted time’. No woman has run within 2.5 seconds of Bolt’s schoolboy time since 1983).
https://www.youtube.com/watch?v=DdvKcXciQ0g&ab_channel=AthletixStuffChannel