MiLB. Do you ever go to these games?

In my town we don’t have professional baseball. Recently I went to Campeche and saw a game between the Campeche Pirates and the Bravos (AAA Mexican league). I was very impressed with the professional level of play.

And they had $1 beers, great homemade food and cheap! Tickets were $2 for the cheap seats. So, everyone can afford to come to a game. Only thing I didn’t like was the loud music in between balls and strikes. But, I imagine everyone else did.

I did happen to grab a game ball. I was surprised to see that it was made in China. Are MiLB and MLB balls in the US made in China? Although I go to MILB and MLB games in the states (when I visit), I have never gotten a game ball.

Oh yeah, all the time.

Looking through old pictures of our dating life, Mrs. Cups and I were amused to see just how many different times we went out to a minor league game. One always seemed to pop up wherever we were.

When I was growing up, I went to a number of minor league baseball games in Wahconah Park in Pittsfield, MA. I think the team was the Pittsfield Cubs. It was entertaining, the view was close to the field, and the price of everything was astronomically cheaper than at a MLB game.

I’ve been to a handful of minor-league games over the years; it’s always been a lot of fun, and, as you note, substantially less expensive than going to a MLB game.

In the Chicago area, we have several minor league teams, all of which are in the suburbs. One of them (Kane County Cougars) is an affiliate of a major-league team (currently part of the Diamondbacks organization); the rest are in independent leagues, IIRC. They usually promote themselves as being affordable family fun, and some of them (the Cougars in particular) draw pretty well.

Round Rock Express isn’t far as the crow flies, but leaving the stadium is a complete nightmare. I’d go if I had someone else interested in going with me. I’d just as soon go to San Antonio, see the Missions, and make a weekend out of it with the zoo and other attractions. i’ve been to a few Midland Rockhound games.

I’ve thought about going to MiLB games nearby, but we’re so close to Fenway and you can get reasonably priced tickets (for varying definitions of reasonable) so it’s MLB for me.

I did happen to grab a game ball. I was surprised to see that it was made in China. Are MiLB and MLB balls in the US made in China?

MLB balls are currently made by Rawlings in Costa Rica; they had previously been made in Haiti.

It looks like the balls which Rawlings makes for the minor leagues are made in China, however. 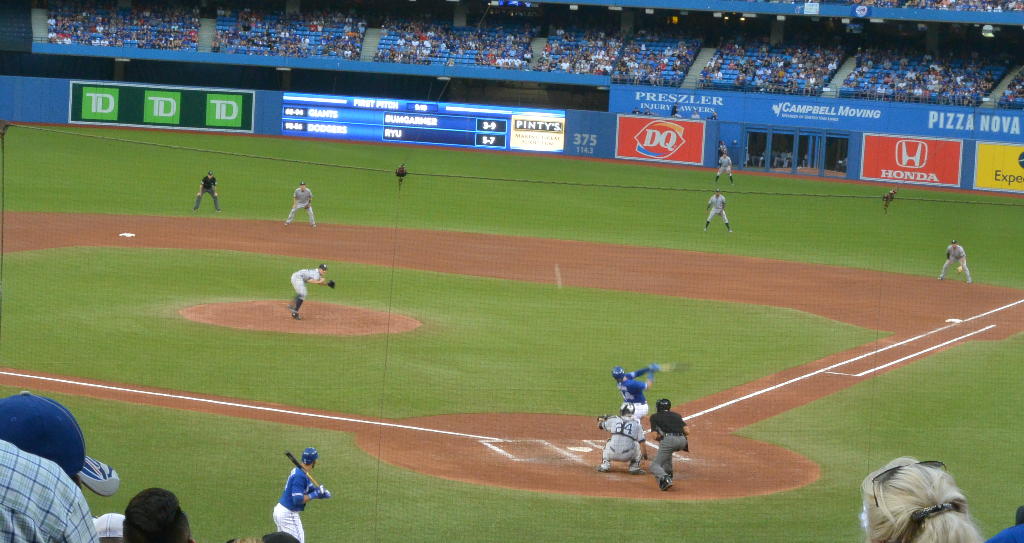 While in Toronto (Canada) this week, I got a chance to a see Blue Jays baseball game on Saturday. And true to Jays’ style this season, they lost. Saturday’s game was the second of the t…

Sure, off the top of my head I’ve seen the Columbus Clippers, Indianapolis Indians, El Paso Diablos, Ft Lauderdale Yankees, Rancho Cucamonga Quake, and I know I’ve seen a game in either Riverside or San Bernardino California, but can’t remember which one it was nor the name of the team. And, I’m sure I’ve forgotten a few.

I don’t tend to do road trips any longer, so I haven’t been to a minor league game in a while. And, I do have two major league teams here in Chicago. White Sox tickets can often been found cheaply, and even the Cubs on occasion, although not often in the peak of summer.

It has been a while, but I used to see the Rancho Cucamonga Quakes on a semi-regular basis. Minor league games are great fun, in my opinion. I have several options locally, now (mostly Orioles affiliates), but no one else I know has an interest in going.

We go to a few each summer. We have the Worcester Bravehearts and Lowell Spinners within a 20 minute drive. The two of us get out for about $25. A day at Fenway, on the other hand, would probably run at least $150.*

*Plus, I already got to see Luis Tiant vs. Jim Palmer at Fenway, back when a bleacher seat cost $1.25.

I’ve gone to games in Panama on occasion. Unfortunately I haven’t been for some years since the Panamanian friend I go with keeps dropping out on our plans.

Rod Carew stadium (the most famous Panamanian ball player before Mariano) where the teams play is decent, if not very large. The most interesting thing is that they sell little dishes of ceviche in the stands along with the hot dogs.

A few years ago, after his retirement, Mariano brought down a bunch of his Yankee teammates including Derek Jeter to play a couple of exhibition games. I went to both.

When I lived in Boulder, Colorado, I went to one or two Rockies games in Denver when they were still a minor league team.

Our local team is a AAA team, so it’s the real deal. I’ve watched a few of the players come up from school in the area to the closest MLB team.

When we were in Maryland, I caught the occasional Hagerstown Suns game. Those were a hoot.

No, I don’t go to White Sox games.

Back around 1980 I used to go see the Holyoke (Mass.) Millers, a Brewers Double A farm team. They played at a high school field that had a cinder track running thru the outfield. You would see some interesting hops when a ball bounced on that cinder track.

I also saw Mickey Mantle, Jr. play for the Alexandria (Va.) Dukes, I think a Single A club. He was not a chip off the old block, unfortunately

We love going to see the Sacramento River Cats. Since they are the AAA affiliate of the SF Giants, we often get to see some of the Giants who are rehabbing, which is a bonus. Raley Field is about 10 minutes from our house and it’s pretty easy in/easy out. We go whenever we can, which is not often enough.

Round Rock Express isn’t far as the crow flies, but leaving the stadium is a complete nightmare. I’d go if I had someone else interested in going with me. I’d just as soon go to San Antonio, see the Missions, and make a weekend out of it with the zoo and other attractions. i’ve been to a few Midland Rockhound games.

I get up to Round Rock 2-3 times a year for a game. My schedule is such that I can usually only go on Mondays or Tuesdays, and Tuesday is half-price ticket night. Beer isn’t much cheaper than at a Rangers or Astros game, but I can often get seats for $16 (or $8 on a Tuesday night) and park my beer and peanuts on the roof of the dugout while I watch the game. My experience getting out of there hasn’t been all that bad except for the couple of times I’ve been there when it was packed, but it’s an hour plus drive up there for me from the far south end of Austin and traffic pretty much always sucks hard around 6:00 any way you go.

The Kane County Cougars play about 15 minutes from us so we go a couple of times a year. We’ve also gone to see the Peoria Chiefs (St. Louis Cardinals). A number of other Midwest League teams happen to be located in areas where we like to camp. I imagine in the next year or two we’ll add the Western Michigan Whitecaps (Detroit Tigers), South Bend Cubs (Chicago Cubs), Quad Cities River Bandits (Houston Astros) and Wisconsin Timber Rattlers (Milwaukee Brewers) to our list.

The Midwest League is considered low A ball so sometimes the quality of play is not so hot. Sometimes you get lucky and see players who make it to The Show. For instance, a few years ago we saw current MLBers Austin Gomber and Alex Reyes pitch when they were with the Chiefs.

Minor league is definitely more fun. Lately, it’s mostly Lake Erie Captains, but I think there’s one in the western exurbs, too. And when I was going to school in Philadelphia, we’d occasionally take a road trip down to see the Delaware Blue Rocks.

Here in Cleveland, we have a number of good minor league options. There is an Indians A Ball affiliate in Eastlake OH, the Lake County Captains, an AA team in Akron (the Rubber Ducks) and an independent Frontier League team in Avon OH, the Lake Erie Crushers. All are good values.

All the time. The Dodgers Single A Advanced affiliate is just a few miles down the road, with a very nice stadium and cheap tickets. Not to mention waitress service to the seats right behind home plate. Go, Quakes!