Happy Birthday today to Gertrude Weaver, the second oldest person in the world, nipping along at the OP’s heels.

I’m still expecting Jeanne Calment to rise from her grave and devour us all.

I’m still expecting Jeanne Calment to rise from her grave and devour us all.

Wow, it’s a big day for super-centenarians! Misao Okawa has passed her countrywoman, Tane Ikai, for the number six spot on the list of oldest (verified) people ever, and in a weird coincidence (set in motion way back in the 19th Century), today is also the day that American Gertrude Weaver booted Jiroemon Kimura from the tenth position of this list.

Mr. Kimura was the only man on this list, so as there is no country for old men, there’s now no “top ten oldest people ever” list for them either. There’s also no men among the top ten oldest people currently living, so not much chance of men regaining a foothold on the “ever” list. Oh, well. When you’re putting 75 candles on your grandchildren’s birthday cakes, it’s probably time to pack it in anyway.

Okay, I guessed what this meant, but googled to be sure.

She did it! Misao Ozawa is now number 5 on Wikipedia’s list of (confirmed) oldest people ever. She’s also just a couple of weeks short of her 117th birthday, and I’m sure that will be a party to remember!

Her next milestone comes later this year, when she could take the number 4 spot and shortly after that, number 3. L’chayim, Misao!

6 more years to the top spot … if I were her and wanted the record, I’d ask to be put into a coma until I broke the record.

Well, sure. Anyone given a choice would sleep through their awkward hundred-and-teen years.

Happy birthday, Misao Ozawa! She’s the first person to reach her 117th birthday this century. However, all-American, Gertrude Weaver, born on the 4th of July, 1898, is just a few months behind.

This thread will lie in quiet repose for months or years until someone resurrects it with some borderline-offtopic irrelevancy.

The world’s oldest living person, Misao Okawa, is currently number 10 on Wikipedia’s list of (confirmed) oldest people ever, and in ten days (God/goddess/G*d/Og/Kaml willing) will take the number 9 spot. Over the next year, she could even move up to number 5. Go Misao! We’re rooting for you!

dat’s quite an accomplishment.

Yes, the watch is over. I was waiting to see if it was an April Fools’ Day prank. (No, not really. I was traveling and didn’t see the news until today.) I had high hopes that Ms. Okawa could take the number 3 spot later this year, but, hey, she had a good run. How many people can say they lived during three centuries? (Well, actually, nine, at the moment. Still, that’s nine out of 7 billion.)

Given the advances in medicine that will still be coming, my older nephew has a shot at living in three centuries. He was born in 1994, so would have to live to be not quite 107 to do it. My grandmother, who is his great-grandmother, lived to just short of her 108th birthday.

The crown has been passed again.

We’re running out of eight-teenhundredsers.

According to Wikipedia, Ms. Weaver was the last known living person born in 1898. We still have three women alive born in 1899: Jeralean Talley, Susannah Mushatt Jones, and Emma Morano.

Wow, that’s a weird coincidence, though to be fair, the continued life expectancy for 117 year-olds probably isn’t very long. In any case, it’s cool that Gertrude Weaver got to be the oldest living person, even if it was only for six days.

. In any case, it’s cool that Gertrude Weaver got to be the oldest living person, even if it was only for six days.

There’s an implication, written between the lines, that she was so fragile that the excitement was too much for her…"She certainly enjoyed it,’’ Langley said

The current holder, who is here is SE Michigan, just had her 116th on Saturday.

Judging by the picture, She doesn’t seem to be in much danger of getting overly excited about it. Probably all those idiot reporters bothering her. 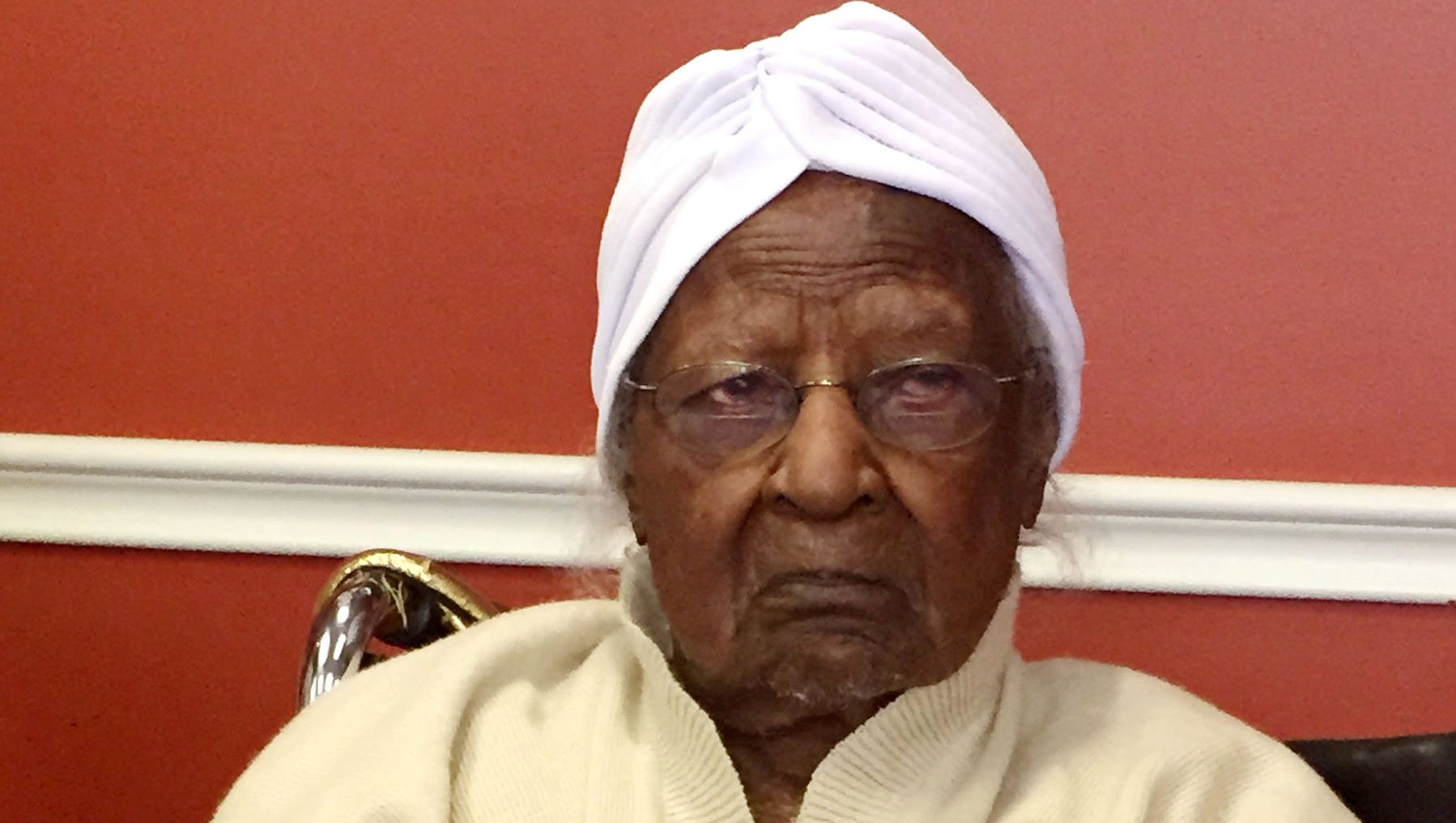 The current holder, who is here is SE Michigan, just had her 116th on Saturday.

Judging by the picture, She doesn’t seem to be in much danger of getting overly excited about it. Probably all those idiot reporters bothering her.

I love her expression. It’s all “Don’t make me smack you!”