The Royals have yet to have their championship parade. The Mets have yet to fully drown in their sorrows. And 28 other teams are still scratching their heads, wondering how they failed to make it to that most celebrated of stages in our great American sport this past season.

Still, the end is the end, and we can now close the book on the 2015 season. This thread is your place for the entire offseason to discuss:

That is, of course, after you’ve all had a chance to recover.

So to get the ball rolling:

The Astros have three significant free agents hitting the market:

Starting pitcher Scott Kazmir, who started very strong but tailed off at the end of the season - season ERA of 3.10 but doesn’t go deep into games, only 183 innings in 31 starts;

Outfielder Colby Rasmus, who was a slightly-above-average offensive player (.238/.314/.475) and then went crazy in the postseason. He actually had a higher OPS (1.760) during the division/LCS than Daniel Murphy. He can play centerfield competently, though he’ll be mostly a left fielder if he comes back to Houston.

Lefty reliever Tony Sipp, who had a sub-2 ERA and >10 K/9. He’s 32 and it was the best season of his career, though his previous season (also with Houston) was pretty good too. The strikeout rate has been consistent across his career, but he greatly improved his walk rate in Houston.

The team’s biggest weakness was lack of offense from 1B/DH - Evan Gattis had a .285 OBP, Chris Carter couldn’t hit .200, and others tried in that spot weren’t any better. It will be interesting to see what GM Jeff Luhnow does with these spot, as Gattis and Carter are both “his guys” - he’s now past the point of getting rid of the guys from the previous regime and now is going to have to decide whether he’s made the wrong call on Gattis/Carter/others. There are some in-house alternatives:

Jon Singleton, who’s had multiple brief shots in the majors but hasn’t produced; on the other hand, he’s only 23.

A. J. Reed, who is rated as the top first-base prospect in the minors; a typical high-power high-walks big slow guy who led the minor leagues in home runs. On the other hand, he hasn’t played above AA yet.

Tyler White, a low-round draft pick who has hit like crazy at every level, including .362 in half a season at AAA. Could be a Dave Magadan-type low-power no-field no-run guy who hits enough to make it worth it.

Other than that, they might make a play for Craig Kimbrel as a top-end closer, or could potentially try to improve the top of the rotation with one of the top free-agent starters; it will be interesting to see how high the budget goes and what the GM chooses to do with it.

With Alex Anthopolous unceremoniously pushed out and Mark Shapiro taking over the Blue Jays, expect the team to be pulled apart completely. David Price will be thrown a qualifying offer to get a draft pick. We’ll probably see Jose Bautista traded, and possibly also Edwin Encarnacion. Anyone expensive that can be gotten rid of, will be. (Troy Tulowitzki may be hard to move.)

There have been rumours the Jays planned to exercise their option on RA Dickey, but that report happened before they got rid of Anthopolous. I would be rather amazed if Shapiro kept Dickey if he has the chance not to, so that information might be out of date. Note that the team has to exercise options on Bautista and Encarnacion, too, but as they are worth far more than those price tags, they’re certain to be exercised so they can be traded. Dickey is probably not easily traded at his $12.5 million salary. These moves might not happen until quite late in the offseason though, as it’ll give Rogers a chance to make advertising deals at higher, happy-fan-influenced rates before dumping all the talent.

Toronto’s 2016 team will be cheaper, younger, and way worse, and will stay that way as long as Rogers wants Shapiro to run the club. We’re entering another long dark age.

Re: the Blue Jays and Price - I thought you don’t get a draft pick for a QO to a rental.

So Jays fans are expecting the organization to go full Marlins. That sucks. For you anyway. As a Red Sox fan I’m cool with it.
I still don’t really understand why they’d do it, though. From the other thread, even if season tickets are sold out for 2016, isn’t TV the bigger revenue stream? And as Rogers owns their own broadcast rights, meaning they haven’t already been sold for a huge sum, wouldn’t you get more eyeballs on the games if you have a competitive team?

Vegas picks the Dodgers to win it all next year.

Seems a tad premature since we don’t even know who will manage the team, whether Ryu and McCarthy will be able to pitch, or if Greinke will even stay. I appreciate the optimism, I suppose, but I’m not ready to share it. Maybe when March rolls around.

Vegas odds are not predictions of what will happen, but of how people will bet will happen. Picking the Dodgers to win (which isn’t crazy) gets them the biggest take, that’s all.

Salaries are going to rise as the Red Sox bid on every top starter out there. I have a feeling Papi will be able to talk Johnny Cueto into coming.

Re: the Blue Jays and Price - I thought you don’t get a draft pick for a QO to a rental.

My understanding is that there is a newish rule to this effect.

Correct, a qualifying offer can only be made to players who spent the whole season with that team. Over the past 3 seasons, no player accepted his QO.

Ah, I did not remember the rule on qualifying offers.

Technically this makes Price a somewhat more attractive option for the Jays since they cannot bank on a draft pick if he leaves. But Shapiro still won’t sign him. It’s not his MO.

From the other thread, even if season tickets are sold out for 2016, isn’t TV the bigger revenue stream? And as Rogers owns their own broadcast rights, meaning they haven’t already been sold for a huge sum, wouldn’t you get more eyeballs on the games if you have a competitive team?

At some point the ad buyers have to commit to 2016 airtime. Once the commitments are in the fire sale will commence.

It’ll hurt the revenue stream in 2017, but Toronto is a very large market with a base level of support it’ll always get. Shapiro can make consistent money for Rogers with a small payroll going 82-80 every year. We’re talking about a gigantic and very fiscally conservative corporation. Consistent, steady returns will make them happy; if they can get that without winning they’ll be happy.

I’ll be fascinated to see if they can trade Tulowitzki, who I am sure Shapiro would trade before anyone else - Tulowitzki is by far the team’s most expensive player in terms of owed money. And to be honest, for the right return, I’d trade him too. He is a wonderful player when healthy, but “when healthy” is a high risk proposition for Troy, and with Travis coming back the team one could always shift Goins to short if there’s no other surprising solution. That’s gonna be a hard deal to make though, given his age, price and injury history. Only a contended with a shortstop need would go for him.

Dusty Baker hired by the Nats.

I’m torn on Dusty. He’s had some success, but hasn’t managed in a couple years now. I know a deal with Bud Black fell apart and I’m not sure he’s exactly right either. I don’t know what other candidates were out available, to be honest, so maybe Dusty really was the best option for the Nats.

I think the Red Sox are lucky that Torey Lovullo did not pursue any managerial opportunities because he’d be a great hire for someone.

That means Black is back in the mix for the new Dodgers manager. Good. I like Bud.

Zach Greinke proves he can add and opts out of his last years as a Dodger to enter the free agent market. He will probably sign a record contract with somebody, too.

Heard Kirk Gibson is getting serious consideration for the Dodgers manager job.

The jokes just write themselves if Kirk Gibson is being considered as Dodgers manager. Tommy Lasorda would be a better choice. 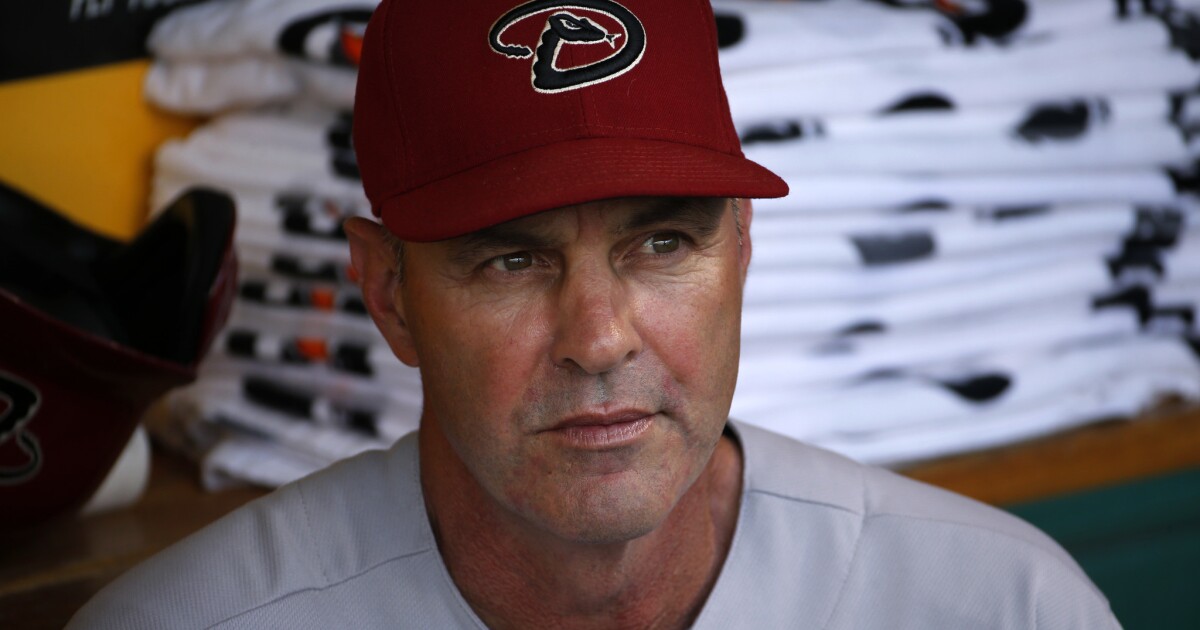 Kirk Gibson, who hit the most famous home run in Dodgers history, was interviewed by the team last week for its vacant managerial position, according to people familiar with the situation who spoke on the condition of anonymity because of the...

The jokes just write themselves if Kirk Gibson is being considered as Dodgers manager. Tommy Lasorda would be a better choice.

We could probably spend a 700-page thread talking about how badly teams choose managers and how silly their criteria are, if in fact they have any. When Alex Anthopolous re-hired John Gibbons to manage the Blue Jays he admitted he did so basically because he liked working with him and didn’t think anything else really mattered. I remember thinking how refreshing his honesty was.

Gabe Kapler another leading candidate for the Dodgers job. Interesting. He’s a fairly young guy, always liked him as a player.

The Giants look like they’re going to be needing a new outfield over the winter. They’ve declined the options on Nori Aoki and Marlon Byrd, and the chances of Angel Pagan playing a full season without getting injured are practically zero. That, plus two starting pitchers, ought to give the front office plenty to do…

Gabe Kapler another leading candidate for the Dodgers job. Interesting. He’s a fairly young guy, always liked him as a player.

I’ve seen this in several places, and keep reading it as ‘Gabe Kaplan’.

Who would be an excellent choice for the Dodgers’ manager, if you ask me.

I’m torn on Dusty. He’s had some success, but hasn’t managed in a couple years now. I know a deal with Bud Black fell apart and I’m not sure he’s exactly right either. I don’t know what other candidates were out available, to be honest, so maybe Dusty really was the best option for the Nats.

I think the Red Sox are lucky that Torey Lovullo did not pursue any managerial opportunities because he’d be a great hire for someone.

Eh, five division titles with one pennant in twenty years (though he did win 103 games and missed his division once). Baker is pedestrian.
I heard Lovullo signed an agreement that he wouldn’t leave for managiral job this year. If not for the cancer, Farrell would have been fired months ago by Cherington or Dombrowski.