I mean movies that teachers showed you in class. There was one in particular that really struck me that we saw in 9th grade, putting that 1973-1974.

It was a film demonstrating how terrible prejudice is. It was in black and white and among the scenes were some kid who thinks “jew” is a bad word, kids picking on another kid of Polish heritage, and an excerpt from an Amos’n’Andy episode.

Did anyone else see this? I tried looking for it on youtube a long time ago but came up empty.

We also got lots of science type movies produced by the Long Island Lighting Company (LILCO) who were the only power provider on Long Island back in the day. One of there movies had a bizarre scene showing what would happen if there was no friction, with a guy not being able to turn a door-knob and walking in place and not getting anywhere.

The Red Balloon. I think everyone who grew up in the 70s must have seen this one. Turns out (I think) that it was a well known indie movie before it was shown to school kids everywhere. Probably the first foreign film many of ever saw.

In the late 60s, “LSD: Trip To Nowhere” was a classic. It featured a kid in a chrome army helmet, a different kid riding his tricycle down a flight of stairs, and a teen aged girl thinking the blue flame on a gas stove was a blue carnation.

There was also “Pit Of Despair” which featured a pusher with a mustache and goatee who looked very satanic who would hang out across the street from the high school offering free first hits of heroin to students.

The only cliche they missed was the baby in the oven but that was only because there were no microwave ovens then.

The Red Balloon. I think everyone who grew up in the 70s must have seen this one. Turns out (I think) that it was a well known indie movie before it was shown to school kids everywhere. Probably the first foreign film many of ever saw.

That was more of an Elementary School film in my experience, but it did get a a lot of play. When my family rented a projector to watch some old home movies in the Seventies, it came with a copy of The Red Balloon. I wonder if it was a giveaway to schools that bought the projectors and that is why it was so omnipresent in the school experience of kids of our generation.

In High School, it was mostly films of books and plays we were reading in English class. We had a general assembly to view Zeffirelli’s Romeo and Juliet preceded by a warning that giggling at Romeo’s bare ass would not be tolerated.

One of the more memorable ones I saw was “VD Attack Plan”, a Disney cartoon short about gonorrhea and syphilis germs plotting to invade humans. We watched it in grade 9 science.

I was in jr high & high school in the 70s. During a special week - not sure if it was homecoming week or something else where every day was something “fun” to do like wearing pjs or crazy hair day, etc. - they showed us Tommy. Borrrring.

I also remember watching Go Ask Alice probably in health class. We watched Patton in a history class and in another history class we watched the Zapruder film. That particular teacher was obsessed with the Kennedy assassination.

One that stuck with me from a high school class that involved daily journaling and discussion of social issues is a depressing short film titled Cipher in the Snow.

I looked it up the other day on YT and found it plus a whole cache of “hard to find Morman films” that appear to be made for school-age audiences in the 70s-80s.

The Red Balloon is one of the three movies I remember seeing in school. And it was in high school in the 90s!

We also saw Schindler’s List, probably as soon as it came out on video. And in our Psychology/Sociology class we watched Do The Right Thing.

OP here, I was really asking about non-theatrical release films that schools showed.

OP here, I was really asking about non-theatrical release films that schools showed.

For me, those were mostly in my Elementary School years (early Seventies). In Junior and High School (late Seventies) instructional and documentary films were rare. These may have been considered tools of the lazy teacher, or maybe it was just at a time when my schools were hesitant to repair projectors, yet could not yet afford VCRs.

I do remember anxiously awaiting a viewing of Red Asphalt or its brethren in Drivers Ed. But when I finally took the class, whatever films we watched were pretty tame.

Junior High: we had “Hemo the Magnificent,” and other films featuring Dr. Research.
High School: Driver Ed. had, “Mechanized Death,” and History class was dozens and dozens of movies, all boring–a wasted class, IMHO.

On several occasions in elementary school, we watched “Bicycles Are Beautiful” hosted by Bill Cosby. The main thing I remember is the way he pronounced it as “buy cycle”.

Two that I remember:

Ringer! anti-drug, and anti commercialism.It had three sub-plots: One involving a fashion fad for nose-rings, and how Evil Corporations will manipulate teenagers into jumping onto silly fads; one involving a rock band, selling their souls to the Evil Corporation for a record deal; and one about how drug dealers use the same marketing techniques to get teenagers to try addictive drugs.

The other one began with two gangs fighting. They run off, leaving one guy lying in the gutter with a knife wound in his belly. As he dies, he thinks back on all the bad decisions that led him to join the gang. I don’t remember the title of the movie. I remember that the gang was named “the Zeros”.

I know I wasn’t always in my right mind [ahem]in middle school / high school, but I honestly cannot think of being shown films, educational or theatrical, after , say, sixth grade. What a ripoff!

Heh, Elmer,I totally remember hearing about Red Asphalt for years before entering high school, and dreading it, and then seeing something that wasn’t anything like what I was expecting. Don’t know if it was THE movie, though.

Anyone else remember the VD (when did they become "STD"s, by the way?) movie where there were several scenes showing a teen on the phone looking horrified and saying “you have WHAT?” ?

This movie in a special history course created for my group of senior WWII nerds. The teacher (Hi, Warren!) was one of the best I ever had. 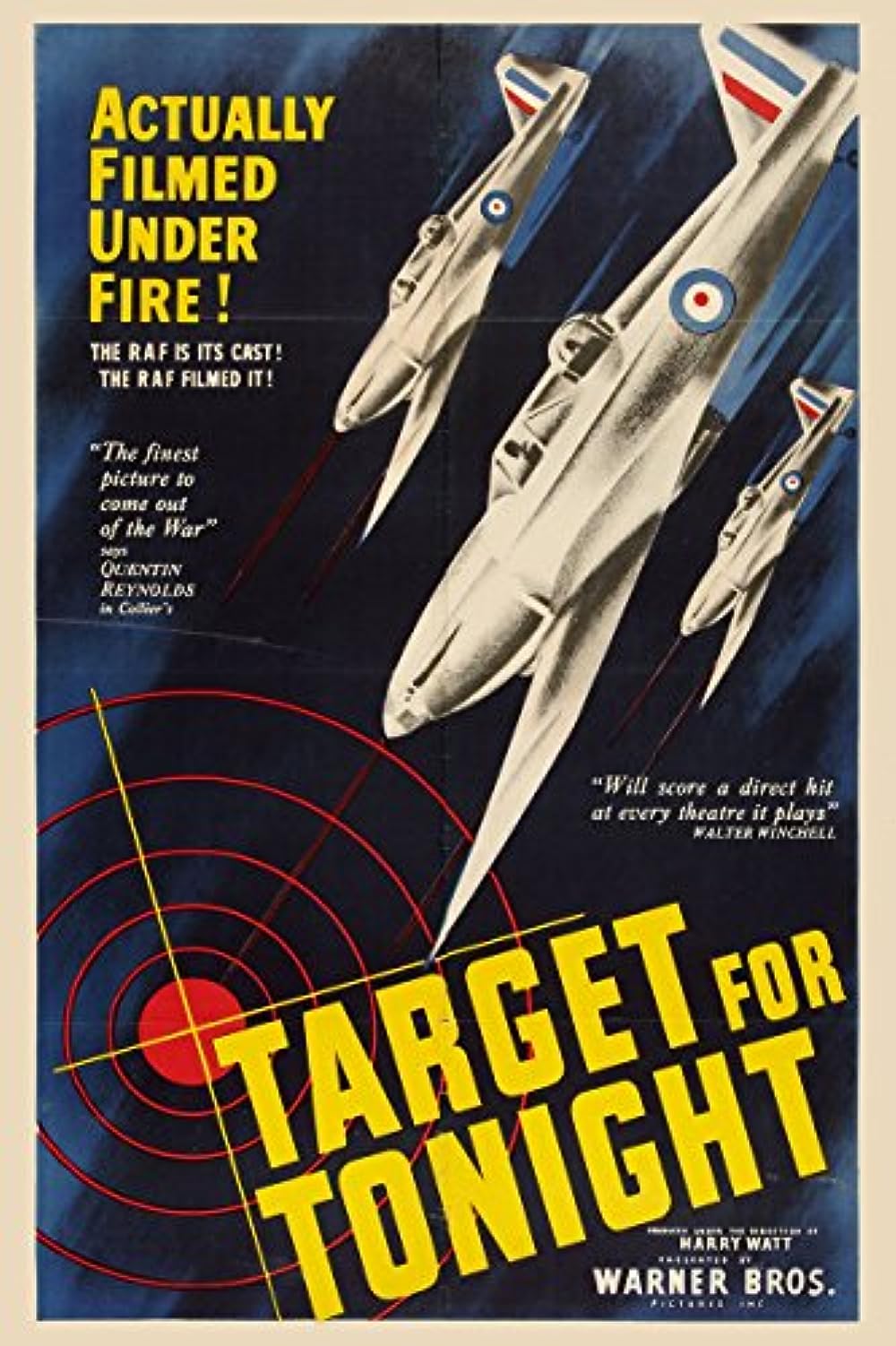 Target for Tonight: Directed by Harry Watt. With John Cobb, Richard Peirse, Percy Charles Pickard, Robert Saundby. The planning and implementation of an RAF night raid on Germany in World War II, concentrating on a low level mission by a Wellington...

Excerpts from this movie were shown in the British TV series The World at War.

I had a world history teacher who showed us Seven Samurai in 10th grade. We also watched adaptations of Shakespeare in English class. Mostly, it was Kenneth Branagh’s versions: Hamlet and Othello. We also watch Much Ado About Nothing, which we didn’t actually read, as my teacher desired for us to see what a Shakespeare comedy was like.

I remember a particular driver’s ed film featuring Wimpy and Bluto (or Brutus) from the Popeye cartoons, but not Popeye himself. Bluto would gun it at every stoplight and then slam on his brakes at the next one, while Wimpy, driving slowly and safely, would catch up to him at every light. Silly but somehow memorable.

Other than that, in high school I mostly remember watching the film versions of books we read in English class, which I don’t think is what the OP is looking for.

Elementary school, now that was a different story. “The Red Balloon,” “The Lottery,” and others like that.

Also, Disney put out a series of “Health Triangle” films, which have somehow stuck in my memory, including the song:

The health of man is like an equilateral triangle
Completely dependent on the length and strength of each… siiiide!