Norway is planning to build a “doomsday vault” inside a mountain on an Arctic island to hold a seed bank of all known varieties of the world’s crops.

The Norwegian government will hollow out a cave on the ice-bound island of Spitsbergen to hold the seed bank.

It will be designed to withstand global catastrophes like nuclear war or natural disasters that would destroy the planet’s sources of food.

I wonder how long the seeds will keep?

Aren’t there some millenia-old wheat seeds they’ve sprouted? This isn’t quite the same thing, but it’s related: 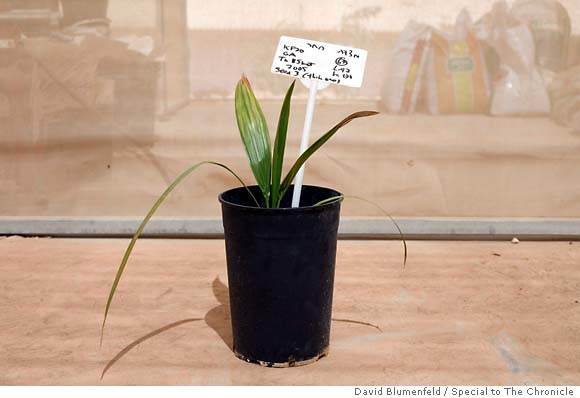 Planted on Jan. 25, the seedling growing in the black pot in Solowey's nursery on this...

Link documents a 2000 year old palm seed being grown.
That said, it still seems a gigantic waste of money.

IIRC, they’ve managed to get lotus seeds that had been preserved for millions of years, but the seeds had some kind of genetic problem because of how old they were.

Ishould think that cryogenic preservation would allow them to keep more or less indefinitely…and someone should ask them if they’ll keep a small shelf in the icebox free for seeds of endangered plants, just in case some go extinct between now and when we figure things out.

That said, it still seems a gigantic waste of money.

Oh yeah? Just remember what happened to Onan when his seed got spilled.

That said, it still seems a gigantic waste of money.

Actually it’s a great idea. Seed banks preserve biodiversity, particularly if a blight were to knock out the current year’s crop (as the U.S. corn blight in 1973 and several outbreaks of mold hitting the sorghum crop.)

Leave it to the commercial seed companies, and they’ll keep a few of their best selling hybrids and throw the rest out, especially the native plants with no commercial value.

Will they have a sperm and embryo bank too because after a couple of nuclear winters I think I’ll be ready for a big steak.

Will they have a sperm and embryo bank too because after a couple of nuclear winters I think I’ll be ready for a big steak.

Er, let me clarify… if you’re collecting everything from wheat to corn to soy, etc, wouldn’t you also want to collect everything from Hereford to Oryx to whatever types sheep, goats, pig and etc exist?

Seems to me if’n a catastrophe is big enough to wipe out entire crop types, then can entire herd types be far behind?

These things should be all over the world, not just in one place. What if the disaster is a meteor strike that hits Spitsbergen?

In the UK, there’s the Millennium Seed Bank Project. Here’s a list of seed banks from our very own USDA.