In 1975, the Canadian Broadcasting Corporation aired The Stationary Ark, a documentary miniseries shot at the Jersey Zoological Park in the Channel Islands. The show was noted for its haunting theme music, composed by John Mills-Cockell.

In 1984, programmer Georg Feil started developing Synth, a music composition system for the Commodore 64. (The sound synthesis chip in the C64 was, at the time, the most sophisticated of any commonly available home computer.) Owing to difficulties with Feil’s publisher, Synth was never commercially released, but Feil used a prototype of it to produce a demo track—a rendition of the Stationary Ark theme, as improvised from memory by a friend of his. Feil shared the demo with another friend of his at the University of Waterloo. That copy got shared with the friend’s friends, and with the friend’s friends’ friends, and so on, until soon the track started popping up all over the world on BBSes and other early online networks. Today Feil’s arrangement of the Stationary Ark theme remains one of the most well-known pieces of music ever to have been produced for the Commodore 64. (And keep in mind that up to 17 million C64s were sold worldwide; the number of C64 users that would have heard Feil’s Synth demo at some point likely dwarfs the number of people who ever saw the original TV series.)

With the renewed interest in The Stationary Ark generated by the Synth demo, people reached out to the CBC and to Mills-Cockell to ask for the original recording of the song, but nobody could find a copy. Apparently neither CBC nor Mills-Cockell had thought to keep any tapes. Mills-Cockell has heard Feil’s arrangement, which he says doesn’t bear much resemblance to his original composition. (When Feil’s friend improvised the tune for him back in 1984, he probably also hadn’t heard the original for nearly a decade, so it’s likely much of it was misremembered.)

I find it fascinating that what became such a popular and well-loved piece of music seems to have been completely lost in its original form. In fact, the best-known surviving version is at best only loosely based on the original. Today you can find a dozen or more renditions of the theme to The Stationary Ark on YouTube but (notwithstanding the fact that some of them are mislabelled as being Mills-Cockell’s original) all of them are in fact arrangements or reinterpretations of Feil’s version. The comments sections of these videos are full of people pining for the version they remember from the TV series.

Can anyone else think of a fairly recent musical recording (say, from the 1950s onwards) that achieved great fame or popularity in its time, but has no known surviving copies today? Note that I’m not talking about songs like the Beatles’ “Carnival of Light”, which has never been released (not even on bootlegs) but whose tapes are still in existence (in this case, in Paul McCartney’s possession), nor songs that some artist cut but ended up shelved or relegated to some obscure but extant B-side or compilation release. I’m thinking more along the lines of famous lost films, where a recording was publically released, and maybe even became quite notable (either in its own right or through later cover versions), but where no copies are known to exist in the present day.

The universal music fire is often called the day the music burned. The master tapes of many artists is lost forever. Some of the older artists may not have been rereleased on cd. Old vinyl records may be the only format for the more obscure artists. Mp3 uses lossy compression. The sound of silence: What did we lose in the Universal Music fire?

The 2008 fire destroyed tens of thousands of master recordings, which are "as good as it gets" in preserving an artist's musical intent, experts say.

I’m sorry – I’m going to violate the OPs requirements here, because these are recordings that could have been made (the performers were around after invention of recording technology), but for some reason weren’t. And these SHOULD have been recorded:

1.) The Cherry Sisters – reportedly the worst singers of all time (take that, Florence Foster Jenkins! And she was recorded AND had a biopic.). It’s barely possible that there’s a recording of one of them. But, if so, it’s never surfaced

2.) The Telharmonium – The Proto-Synthesizer generated music by mixing sinusoidal signals (that were electro-mechanically generated by special sine rotors) to create unique and original waveforms. Built before electronic amplification, the machine and its electrical parts were enormous, weighing tons. They built a special performance venue for it in New York – Telharmonium Hall.

Yet it was never recorded.

In 1895 Thaddeus Cahill submitted his first patent for the Telharmonium “The Art of and Apparatus for Generating and Distributing Music Electrically”. The Telharmonium can be considered the first s… The Telharmonium (also known as the Dynamophone) was an early electrical organ, developed by Thaddeus Cahill circa 1896 and patented in 1897. The electrical signal from the Telharmonium was transmitted over wires; it was heard on the receiving end by means of "horn" speakers. Like the later Hammond organ, the Telharmonium used tonewheels to generate musical sounds as electrical signals by additive synthesis. It is considered to be the first electromechanical musical instrument. Cahill built thr...

Telharmonium tones were described as “clear and pure”— referring to the electronic sine wave tones it was capable of producing. However, it was not restricted to such simple sounds. Each tonewheel of the instrument corresponded to a single note, and, to broaden its possibilities, Cahill added several extra tonewheels to add harmonics to each note. This, combined with organ-like stops and multiple keyboards (the Telharmonium was polyphonic), as well as a number of foot pedals, meant that every sound could be sculpted and reshaped — the instrument was noted for its ability to reproduce the sounds of common orchestral woodwind instruments such as the flute, bassoon, clarinet, and also the cello. The Telharmonium needed 671 kilowatts of power

Boy, I didn’t mean to kill this thread – I hope I haven’t, really. I’m surprised that no one has added any items.

In any event, to extend my hijack slightly – although there may not be any recordings of the Telharmonium, there is one of a competitor and relative, the Choralcelo, which was also huge (but not as big), and which apparently used sine wheels to electro-mechanically generate its tones.

I’m disappointed. With all that awesome synthetic capability you’d think that they would have created new and interesting waveforms, a la the Moog. But the Choralcelo sounds disappointingly like an ordinary organ: 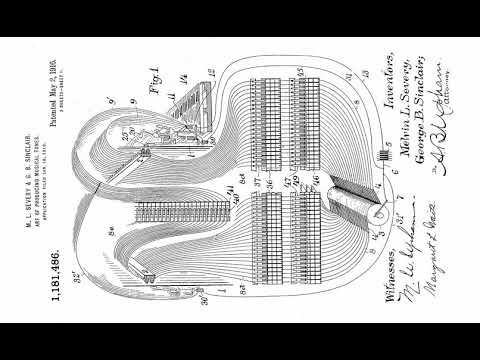 The original two track master tapes of the Beatles She Loves You. For a dwindling few of us it still matters.

Doesn’t meet the criterion of achieving fame or popularity in its day, but there is a story, which might plausibly be true, about a technician who inadvertently used an almost completed Steely Dan master tape as a test tape, completely wiping it. Supposedly they never had the heart to go back and redo it. Though this could be an urban legend?

I see the Universal Studios fire is already mentioned; also, fuck Universal Music, though if you, a musician, have good things to say about them, I’m all ears.

On topic, Mills-Cockell is still around you know

and I’m wondering how the “Stationary Ark” stuff on his page differs from the original version?

Doesn’t meet the criterion of achieving fame or popularity in its day, but there is a story, which might plausibly be true, about a technician who inadvertently used an almost completed Steely Dan master tape as a test tape, completely wiping it. Supposedly they never had the heart to go back and redo it. Though this could be an urban legend?

Yes, a tune called The Second Arrangement, from 1980’s Gaucho sessions. (The linked article notes that working copies of the erased material may have recently been found.)