Mods, if this belongs in General Questions, feel free to move.

I have a little AC/DC Easy Sew sewing machine. (yeah, yeah, insert bi-stitchual joke here) I decided to use it today to stitch up a new pocket on my sweat-jacket, as the dog ate the pocket because it once held treats. The first effort was good, but I ended up with a very shallow pocket and decided it needed to be redone. I started a new one, but I ran into trouble because the machine kept binding. I re-threaded the needle and bobbin according to the instructions, and now it doesn’t work. The needle from the top goes through the material and under the plate and catches the thread from the bobbin and brings it up, but it does not do whatever magic it normally does to construct a stitch.

I have to admit, I’m a mechatard. I can design complex foundations for machinery in aircraft and on naval vessels, but simple machines baffle me. As a result, I have no idea how the two pieces of thread join to create stitches, even though I have extensive experience as a seamstress. I’m sure it’s simple, and I’ll be embarrassed to know the answer, but I’m stumped. The machine is not on the interweb (that I could find), so I’m screwed for help from the manufacturer. I know I can replace this machine for about $15-20, but I’m sure this is something simple. So I humbly ask for help.

I don’t know much about machines and fixing them, so I don’t think I’ll be able to help with that part, but I can help with how the stitch is generally formed: 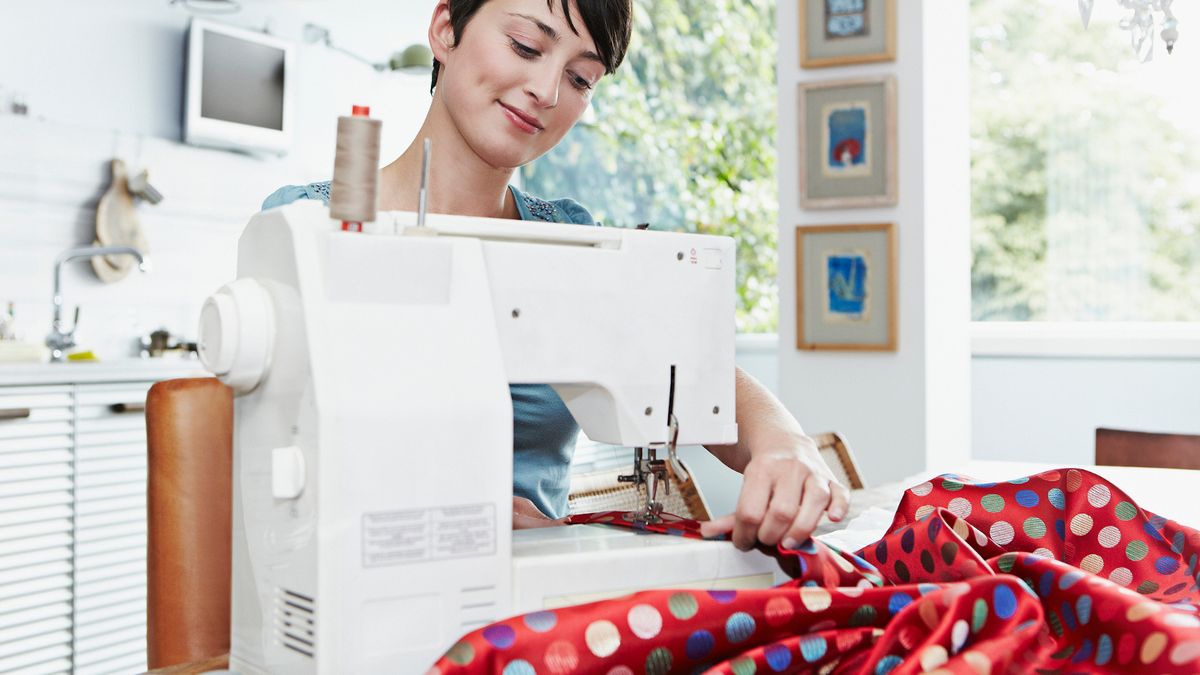 there are some nifty animations on that page that illustrate how it works.

Are you sure your bobbin is inserted in the right direction? If you pull the thread in the direction of the slot in the bobbin holder, the bobbin should probably turn in the opposite direction.
Other than that, make sure your upper thread goes through all the little slots and holders it’s supposed to. In other words, try re-threading it, very carefully.

Well, I re-threaded it twice, once with Mr. singular reading the instructions and watching to see if we both interpreted the instructions the same way, to no avail. Looks like it’s going to be a new cheapo machine for me…

Well, I re-threaded it twice, once with Mr. singular reading the instructions and watching to see if we both interpreted the instructions the same way, to no avail. Looks like it’s going to be a new cheapo machine for me…

Have you considered looking for a used machine in the papers or on Craigslist? You can get a very good used Singer (regular sized) for under $50 most of the time. I’ve even seen them at Goodwill stores for $35 or so. Those puppies - the older ones especially - are usually very well made, easy to thread, etc. And all the gubbins are still available.

I was thinking it was a weird typo of bobbins.

The Singer Touch-N-Sew line is generally a safe bet. There are thousands of them out there, and the line was produced for many years. You can often find them for dirt cheap or free at yard sales and on craigslist. They often are in large cabinets, and that’s what people get tired of bumping into in the basement, so that thing has got to go.

Be prepared to spend $60-100 on a cleaning and tuneup, and maybe a couple minor parts - especially bits that stick out like thread spool holders and tension adjuster knobs. If the machine looks like it’s been dropped, left outside in the weather or otherwise physically traumatized, it probably has been, and you should not get it.

As for their quality and longevity, I’d rather spend $300 to acquire and fix up a Touch-N-Sew than spend a similar amount on a new machine.

As for their quality and longevity, I’d rather spend $300 to acquire and fix up a Touch-N-Sew than spend a similar amount on a new machine.

I agree with you on the quality of the old machines. Any major name brand would do me if I was looking for a cheap machine that sewed a straight stitch (and maybe a zigzag) reliably. In the past I spent so little on them - $35 or $45 - that it wouldn’t have paid to have them tuned up and cleaned, even assuming I could have afforded that, which I couldn’t. I just opened them up and went to work with a fluffy artist’s paintbrush and a lot of blowing, then put a few drops of oil in and changed the needle.

They were loud and they didn’t do anything artsy, but they were made mostly of metal (gasp!) and they did the job.

Now I have a Janome6600 that cost a huge amount. It’s made of plastic but it does all kinds of wonderful things. Still not sure it was worth the investment, considering all the great clothes and quilts I made on my $35 machines.