All the schools in our city, in fact, because of an anonymous threat phoned into the police just before lunch. :eek:

Got a tweet from the school a short while ago that the lock-down has ended and kids are getting on their buses as usual.
Lock-down has now ended and I’m waiting at the bus stop to pick the Cub up.

Have no idea if he even knows why they had no outside recess this afternoon. 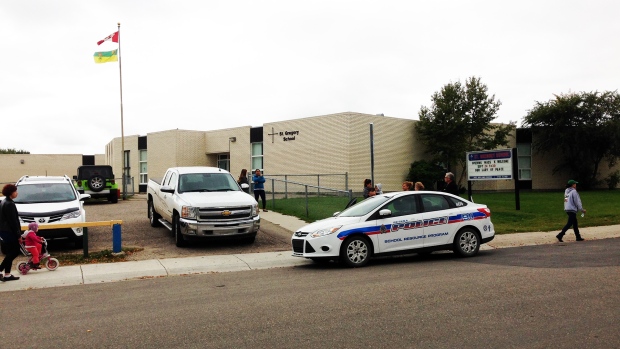 A partial lockdown has been lifted for all schools in Regina following an anonymous threat.

A kid called Mohamed wore a watch to school?

Not quite. Seems to have been more serious than that.

hmm. Standing around at football practice this evening, it sounds like different schools handled it differently.

I asked the Cub as we were walking home from the bus if they’d gone out for recess. He said not - teachers said it was too rainy.

But some of the other parents said their kids came home and said “We were on Code White today!”

At any event, he doesn’t seem scarred by an indoor recess.

Mine had a lockdown today too. The thing is, its become so common that the kids don’t mention it. Twice it was something real (a guy in a van trying to lure middle school girls about three years ago, last year a kid brought a gun to high school in the stupid teenage logic of “I wanted to show it to my friend.” )

Never for a clock though - that one was new.

It happened several times at my sons elementary school. Mostly because it is located by 3 banks and other small businesses which are often hit by thieves.

Cub is 7. Didn’t mention anything unusual about his day last night, so doesn’t appear to have had any impact.

Thomas Friedman of the the New York Times wrote about this.
He describes himself talking to his children, who were in high school, and explaining the Cuban missile crisis. He told his kids how , back then, things were so tense that schools held emergency drills for nuclear attacks, with all the kids ducking under their desks.
The answer he got was surprising: his own kids were casual, and took it naturally.
They said something like “yeah, Dad, we have drills like that at school, too. We have a red alert, and a blue alert. Red means lockdown and stay in your classroom, because there’s a guy with a gun, but they don’t know exactly where. Blue alert means stay in your classroom and cover the windows so the gunman can’t see you.”
The times they are a-changin’…