"My Little Pony": The most sexist show on TV?

I don’t watch much My Little Pony. In fact, I watch as little as I can. But I have a 4-year old girl who’s obsessed with the show, so I’ve been involuntarily exposed to it. And I can’t help noticing a few things.

Every named character is a girl. Actually, there is one character who’s a boy, but he’s someone’s pet, and he’s not a pony. The ruler of the kingdom is a princess, and there’s no king or princes, so far as I can tell. In fact, according to my 4-year old, none of the ponies have fathers. (They all died, though fortunately for the ponies, they don’t miss them.) There are some no-named boys, but their job seems to be to pull carriages for the girls, when the girls feel like riding in carriages, instead of walking. (Or flying. A lot of them seem to be a able to fly.)

Are there any “My Little Pony” experts out there who can set me straight? Is the show less sexist than it seems?

FWIW, my daughter regards boys as an inferior species, somewhere between dogs and bugs. She was literally speechless when she found out I was one of them, but seems to have decided to make an exception for me.

I know virtually nothing about MLP yet even I know there’s at least one named male pony.

I haven’t watched the show but my daughter has the Pony Princess Wedding Castle play set*, and it came with Prince Shining Armour. 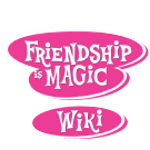 I found that in a quick google search. It’s the list of MLP;Friendship is Magic ponies. I see a ton of males listed.

Yes, there are named male ponies–the laconic Big Macintosh, for example, appears often and is generally presented as a strong, stoic, and sensible character. (When he hasn’t been fed a love potion by the resident shippers-on-deck.) Also, the fathers, older brothers, and other male relatives of several of the central characters (generally referred to as the Mane 6) have been shown in the show. Several members of the Wonderbolts–a famous stunt-flying team, the pegasus answer to the Blue Angels–are male. Less-prominent male characters (named and unnamed) include business owners, doctors, farmers, journalists, law enforcement officers, engineers, aristocrats, and many other roles. (And Spike–the dragon–is Twilight’s long-suffering assistant, not a pet.)

All that said, there appears to be a substantial gender disparity. Based on crowd scenes, the ratio is probably on the order of 3:1, though some scenes show as much as 6:1. To some extent, this is reflective of reality–it is not unusual for equine populations to be majority-female, though not to this extent. However, it is possible that the real ratio is closer than seen from town scenes because of social dynamics not immediately obvious in the show. Again, among real equines, the strongest social groups tend to be mare herds, so the females may be overrepresented in town life, while the males are more prone to joining the military or following other careers that tend to keep them out of town. (Obviously, the show was originally envisioned with a target audience mainly of young girls, so a high proportion of female characters is to be expected for demographic reasons, but it’s not entirely unreasonable within the context of the show, either.)

Uhhh, no. I’m an unabashed grown-up MLP fan (though I’m a she and grew up with MLP, fwiw). There are multiple male characters (some of whom were mentioned already), like Spike (who I think you’re referring to, but isn’t a pet but a personal assistant); the Prince and Big Mac (both are older brothers of two of the main characters); the best recurring villain/trickster, Discord (voiced by Q!); multiple one-episode roles; and secondary characters like the above mentioned Dr. Whooves and (my fave!) Bulk Biceps.

Are the majority of characters female? Yeah. And? Have you actually paid attention to almost every other show out there? There’s a reason TV Tropes has a page on “The Smurfette Principle”

For any series not aimed solely at females, odds are high that only one female will be in the regular cast.

My guess is that you haven’t noticed that because you’re likely a guy (going by username) and it’s the cultural norm. So no, one of the relatively few shows that does the reverse isn’t “the most sexist show”.

Ever heard of the Brony phenomenon?

I don’t think it’s sexist at all. It’s a show that was supposed to be aimed at young girls (but obviously has a larger fanbase because it’s so good, including myself as shown by my username), so of course it’s going to have primarily girls. It’s one of the only shows out there aimed at girls that isn’t sickeningly sweet and stupid. It’s not leaving out boy characters, just highlighting the girls. And even if it were espousing some sort of female supremacy agenda (and it’s not), I think one show after decades of insipid “boy” shows isn’t the end of the world.

Clearly, the show’s biggest problem is that it’s racially biased against the non-Pony minority. How often are donkeys, griffons, and minotaurs featured positively in the show, hmm? Further, the shows blatantly identifies Alicorns as a superior breed above other ponies, and has the further gall to divide magic into good and evil version (oh, sorry “Dark” magic), a view clearly meant to indoctrinate children into fearing the Blasphemous Arts of Black Sorcery.

Why would a show featuring mostly female characters be sexist? What about shows that are mostly male?

Oh, and she thinks Donut Joe is awesome.

I have not and probably will not watch this show* **, but I have a hard time imagining a character named “Donut Joe” not being awesome in anything.

Why would a show featuring mostly female characters be sexist? What about shows that are mostly male?

I think the point the OP was making was that the few males he has noticed on the show tend to be in subservient roles and have little or nothing to say.

It’s kind of like asking if a show set on a southern plantation in the antebellum south that showed blacks as slaves and largely non-speaking–was itself racist.

Ah, obviously my own ignorance, then. For example, I didn’t realize Spike was an assistant, not a pet.

The few shows I have watched seem mainly about Twilight, Rarity, Rainbow, Fluttershy, Applejack, and Pinkie Pie. And Princess Celestia.

I take it there are other episodes about boys, then?

Why, is there something wrong about episodes about girls?

Ever heard of the Brony phenomenon?

On a different note, Smurfette is a good counter-example, (although she was a main character). I’ve always wondered, with only one female Smurf, how did they repopulate?

Why, is there something wrong about episodes about girls?

Regarding the responses, they seem to range from, “No, it’s not really all about girls. There’s lots of boys in it,” to “Yup, it’s all about girls. You gotta problem with that?” Sort of a set of contradictory responses.

My answer your question is, “No, not really.” I just think its funny, in this hyper-politically correct age, there’s this show out there that (seemingly) makes little- to-no effort include boys. Especially since the other children’s shows out there make such conscious effort to include girls and boys.

I am (very slightly) concerned that the show reinforces her tendency to consider only other girls as potential friends. But I assume she’ll eventually grow out of that.

Ah, obviously my own ignorance, then. For example, I didn’t realize Spike was an assistant, not a pet.

The few shows I have watched seem mainly about Twilight, Rarity, Rainbow, Fluttershy, Applejack, and Pinkie Pie. And Princess Celestia.

I take it there are other episodes about boys, then?

Oh, and Celestia is rarely, if ever, the focus of an episode. She’s a plot device, the immortal god-queen. Think of her as sort of an amalgam of the entire Bene Gesserit order, a couple of sun/moon gods, a motherly busybody, and an internet troll.

F’rinstance, lemme build on my original answer: Hoity Toity is introduced as “the bigwig fashion hotshot” who can make or break our heroine’s dreams of making it as a stylish dressmaker. He’s not the protagonist; the episode revolves around her, and whether he’ll (a) insult her work as amateurish at the fashion show, or (b) follow up praise by placing an order for dozens of dresses.

Likewise, there’s an episode where one of the girl ponies is in a baking contest; she’s up against recurring character Donut Joe, who’s been “picking up the final all-important ingredient for my contest entry: DONUTOPIA! And with these super sprinkles, my donuts are going to dunk all the other lousy desserts, steal first prize, and make my donut shop famous forever!”

It’s not about him; it’s about her. But it’s about her accusing him of sabotaging her entry, and then offering to team up with him after his entry likewise gets ruined before the competition, and so on; if she’s the protagonist, he’s the rival-of-equal-or-greater-status. (She just works in a husband-and-wife-owned bakery; he apparently owns his own place.)

And, as was hinted upthread: in an episode where tomboyish pegasus Rainbow Dash gets laid up in the hospital with an injured wing, it’s a plot point that she’ll leave when the male doctor says so. Because he’s a frickin’ doctor. The episode’s still about her, but he’s an important guy.

At that, they haven’t done an episode about Silverstar, because he’s not a main character; he’s just a male who (a) holds down the job of sheriff, and (b) has an impressive moustache.