In the late 19th Century, & the early 20th, there was a rash of “Mystery Airship” reports–reports of blimps or zeppelins prior to their invention.

The Mystery Airships were unidentified flying objects reported in newspapers in western states of the US, starting in 1896 and continuing into 1897. The reported ships were usually said to be a type of dirigible, and were usually differentiated from gliders or hot air balloons. The first wave of airship tales were largely confined to North America, but later “flaps” included similar reports from around the world, as late as the eve of World War I.

The UK had a similar run of incidents. 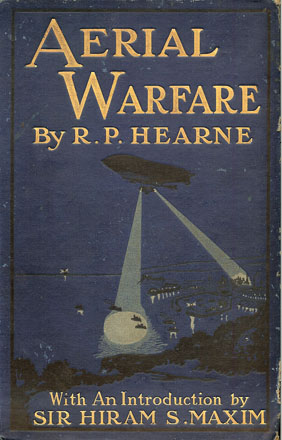 On the night of 23 March 1909, a police constable named Kettle saw a most unusual thing: 'a strange, cigar-shaped craft passing over the city' ((Standard (London), 17 May 1909, p. 9.)) of Peterborough, Cambridgeshire. His friends were sceptical, but...

I reject the silly idea that these were spacecraft.

But, could early experimenters have built them?

Can anybody recommend me some book titles on this subject?

Not a book on the subject, but Philip Klass, the UFO debunker, devotes a chapter to them in his book UFOs Explained. His take is that they were all hoaxes.

This, recall, was the era of Jules Verne’s Robur the Conqueror (and later Master of the World) , both about heavier-than-air airships built by lone geniuses. I think one or more of the Frank reade series may have dealt with this as well. But as a realistic thing? Not a chance.

A bit more on these:

Not familiar with this one, but several sites list it. It seems to meet your criteria of a book on the topic:

You might enjoy this article and the links in it. It is where I first read about the mystery blimps.

In the late 19th Century, & the early 20th, there was a rash of “Mystery Airship” reports–reports of blimps or zeppelins prior to their invention.

(bolding mine)
As a matter of fact, there were six or eight airships (depending on which ones are counted) that got into the air between 1860 and 1890–and in 1896, David Schwarz, the man from whom Zeppelin borrowed many of his ideas, made a widely publicized flight in Germany in the same year that the “sightings” began in the American West. Throw in a bit of Robur the Conqueror and I suspect that it would not be diufficult to come up with some fairly accurate speculation regarding the source of the Western sightings.

One of the reasons for American sightings was that some men in California had fooled the public into thinking they had built a ship. It was found later that they had lied. The automobiles were an exciting new experiment in travel about the same time. There was a race accross America from the west coast to the east coast. There was a car inventor from Wisconsin that also made the first marine engine that was a big hit on the west coast. I believe Washington, but it may have been Oregon. He sold engines to the fishing boats, in mass because he showed them how to beasch and install them without a dry dock fitting out. The country was facinated by travel at the time and many newspaper’s had no quams about making up a story to sell newspapers. The excitement about airships was great, so many stories exist without real proof.

I’ve read The Great Airship Mystery and I recommend it. It describes many of the sighting. Many involved the sighter supposedly talking with the pilot, who was often from New England and was usually going to go public fairly soon. Some of the sightings were by many people.

The parallel to UFO sightings is quite striking.

I suspect a lot of these airship sightings came about as the result of pranks-kids making hot air ballons , with a few scraps of balsa wood, a few candles, and a large tissue-paper bag. These hot air ballons will rise to several thousand feet, and stay aloft as long as the candles burn-and from the ground , on a dark, moonless night, can be very striking. i’ve done it myself-if you use colored paper, the effect is very strange. Such pranks were probably the source of most of this. i’m fascinated by the claims of powered flight (before the Wright brothers) thewre were inventors all over America, who had the same level of skill as the Wrights-so it’s not unreasonable that some of them achieved flight.

This is one of those subjects I watch for when gleening archives. I hope for somebody finding an actual picture in a newspaper or photo archive one day.