Name 17 superheroes in this picture (spoilers)

Martian Manhunter often has gold buttons on his cape like that.

Edit - well, not quite like that. They’re usually bigger and more centered.

I only got 11 from looking at the picture. I don’t know if that should make me happy, or sad.

The belt is Cable’s.

Reviewing a number of pictures - I think you’re right. Cyclops’s utility belt had a rectangular frame for the “X”, Cable’s had the circular frame as in the picture.

Martian Manhunter often has gold buttons on his cape like that.

That bit is really frustrating me. It looks so familiar, like I should immediately be able to definitively identify who it belongs to but…it looks a bit like a costume element from a lot of different characters, but I can’t find anyone that quite matches it. Thor, Martian Manhunter, Doctor Strange, Supreme, The High, Legacy, Spawn, Homelander, Captain Marvel…Martian Manhunter does seem closest and maybe that’s who it’s supposed to be, but his fasteners are usually depicted as much larger discs, not the buttons in the pic above.

It doesn’t help that some of the costume elements, like Punisher’s skull insignia, have been color-shifted, and there’s at least one clear artist’s error, putting the Right Hand of Doom on the left hand…I’m going to be irritated if it turns out the fasteners are just another artist error.

That cloak is driving my nuts. I recognize it and remember reading it in the late 90s but I can’t put a name to the anti hero. I only got 10 so I obviously didn’t do great.

Cable’s had the circular frame as in the picture

From looking at pictures, the buckle varies from round to rectangular.

The thing about the belt in the picture is how small the pouches are. Most of the utility belts, no matter who they belong to, have pouches larger than the belt.

I only got 11 from looking at the picture. I don’t know if that should make me happy, or sad.

It doesn’t help that some of the costume elements, like Punisher’s skull insignia, have been color-shifted, and there’s at least one clear artist’s error, putting the Right Hand of Doom on the left hand…I’m going to be irritated if it turns out the fasteners are just another artist error.

Me too. Also, I can’t get past the blue tunic type thing. That should be identifiable, it takes up half the picture. I’m also surprised Batman was left out, unless the utility belt is supposed to be his.

I think we can rule these out as being lesser known. Now that I think of it, Cable may fall into that category too.

I only got 10 so I obviously didn’t do great.

Actually, this works out great because low man on the list has to supply the beer and you seem to be set up pretty well for that.

What makes this either a bit easier or a bit tougher is that the artist crosses Marvel and DC. Best I could do was 16:

The general “rattiness” of the cape reminds me of the symbiotes from latter-day Spiderman story lines. And the round, gold shoulder pins holding the cape on are probably meant to evoke another hero, but I can’t come up with who, exactly.

Ah – I didn’t get that the cape was Spawn’s. Was kind of thinking mostly older-line Marvel and DC.

After doing a little searching and reviewing images … I’m convinced the gold shoulder buttons are supposed to represent Martian Manhunter. Often in the art the gold buttons are larger, but just as often they are something like silver-dollar sized.

EDIT: And I missed the Hand of Doom from Hellboy. Still, switch out my Ironman for Hellboy and my Dr. Strange for Spawn … then add Martian Manhunter for the gold shoulder buttons, and that makes 17.

Does Doctor Strange usually have yellow trim on his cape? 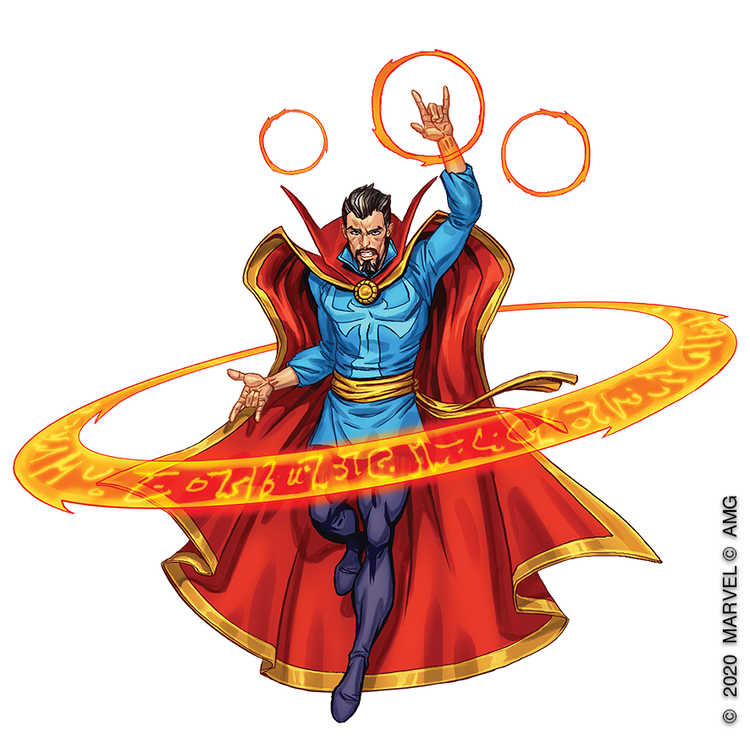 Probably rule him out for the cape/buttons then. Too bad his tunic has the insignia on it because it’s kind of close to the blue in the picture.

A bit of a tangent, but today I was browsing an archive of old Pizzazz magazines (man was it awful) and found this: 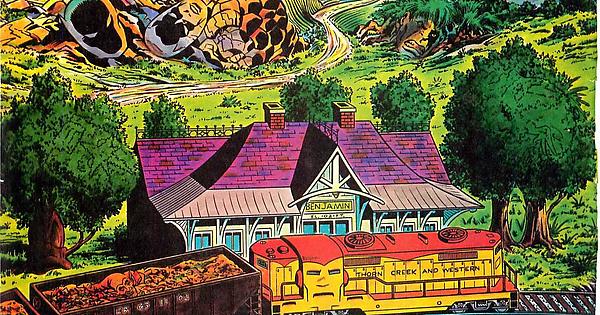 Imgur: The magic of the Internet

The list (but not locations) is in the blurred spoiler.

The woman I wasn’t sure about was Ms. Marvel, one of my two guesses. “She-Hulk” is actually Mary Jane - I got thrown by the green color, I think. The guy in clouds I couldn’t identify was Iron Fist. Upon further review, I now see Howard the Duck. I’m still not seeing Man-Thing, though.

Still no ManThing or Howard the Duck. Maybe Howard is the vaguely wing shaped thing in the tree center right?

Howard is the trunk of the tree on the left. The leaves of the tree on the right look to be Cap.
Man-Thing is so weird looking, he could be just about anywhere… I think that he’s probably hidden in the berry bush at the bottom, because the berries resemble his eyes, but I can’t find his proboscis… I suspect like most of Cap’s face, it’s been lost to 70s printing and jpg artifacts…

That is one well hidden Howard the Duck, I never would have got that.

I actually blew up the picture to 300% on the berry bush and still couldn’t find Man Thing, but he has to be there just because of the eyes.

In the tree behind the two chimneys on the house, I see two dark spots that might be Man-Thing’s eyes, but I am extremely unsure about it. I agree, the berries in the bush look more like his eyes, but I can’t see his nose in either place.