Uh Colibri - I’ve got another one for you.
Lake Michigan Chicago lakefront, near the shore.
A group of 10-20 ducklike birds about the size of a mallard. (Also saw mallards nearby - clearly not the same species).
Females were basically brown.
Males had dark (black?) head and dark pointed-appearing beak.
I got the impression there might have been tufts of feathers off the back of their heads/necks.
Males had white at the base of their neck, extending towrds their back.
When they flew along the water - like ducks - you could see the white at the base of their next extended to the backs of their wings.
Otherwise they were mostly dark.

What I noticed first about them was some odd behavior I had net seen before in mallards. The males did a kind of dipping motion, where they sort of dipped their chests down towards the water, while extending their necks and beaks straight up to the sky. Does that make any sense?

I looked at a couple of sites on-line, with no luck.

Did I identify yet another species heretofore unknown to science? Am I about to become famous?

I’m going to say it was a Uria Lomvia or a Merganser. They can look like this too.

Could have been a Pin Tail or Canvas back

Man, I looked at pics of all of those before I posted, and I don’t really think any of them match.
My running buddy has better eyes than me, and when he said the beak looked pointy to him, my first guess was merganser. But I don’t recall there being so much white visible while they were swimming, other than the “collar” around their neck from their throat stretching back onto their back.
It allways happens and really drives me nuts when I stare and stare at a bird, trying to remember everything I can about it, and then when I try to look it up I find no matches.
Of course as I mentioned before, I think the likeliest possibility is that I discovered a new species that will ever after be known as the Dabbling Dinsdale Duck.

Ah, yes…I believe that would be the North Shore Pointy Dipping Bird.

How about a goldeneye. Not very pointy, but he’s doing that thing: 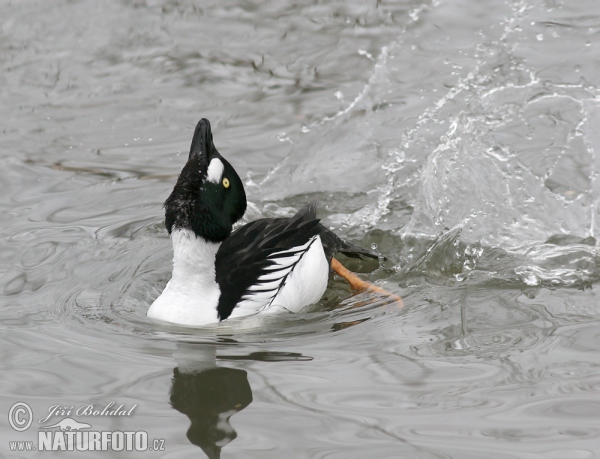 A female merganser look any closer?

I’m a little confused, were their bellies white or their backs?

Common loons would be changing their plumage from winter to summer right now, I think.
They have very pointy beaky things, and would have a white ring around their neck. The difficulties are that I don’t know if they are in groups that large, and they are larger than Mallards.

How about a goldeneye. Not very pointy, but he’s doing that thing:

Yeah, that’s the dippy thing indeed, but these guys were definitely more slender than the bird in that picture, with longer necks.

I tell you, I couldn’t see too much detail in the females, other than that they were pretty completely brown. I noticed these guys as we were running past. I know my vision isn’t the greatest, so I asked my buddy to check them out on the way back. We even stopped to take a good look at them, but I admit I’m limited on how much detail I can see on a bird 20 or so feet away.

I e-mailed my buddy my description to see if he has anything to add.

I’ll explain a bit why I’m asking. I always see literary references to all these different kinds of ducks. But I’m not sure I can ever really remember seeing anything other than plain old mallards. So I’ve kinda been on the lookout for different ducks.

Saw another one the other day - similarly no luck IDing it. It was all alone. My first thought was that it looked like a young gosling, or a large baby mallard. But the geese and ducks around here haven’t hatched yet. It was no more than half the size of an adult mallard, about the size of a couple week old goose. And the coloration was similar to a gosling. Pretty much drab dark brown body, with primarily lighter pale tan color on the side of its head.
I was higher than it and looking down, and what I really noticed about it was that as it was swimming its legs seemed to be placed further back on its body than I’m used to seeing on mallards or domestic ducks. Man, does that look stupid now that I’ve written it!
I looked through my guides and saw nothing that matched. I decided to call it a ruddy duck, tho I’m not at all confident that it was.

Man, I really better stick to my day job!

My duck-hunting friends and I call Ruddy ducks “footballs with wings”. They have very stocky, football shaped bodies with long tail feathers.

I’m a little confused, were their bellies white or their backs?

Not so much either as they had a wide ring all the way around their neck, and it extended back to a point down their back. When they flew I saw additional white on the backs of their wings.
But it isn’t as though their entire backs were white.
And I certainly don’t recall their entire bellies/breasts being white.
I’ve asked my buddy if he recalls.

I’ve seen loons before (tho not along the Chicago lakefront.) They’re pretty big birds, aren’t they? Like I said, these were right near mallards, and were pretty much the same size.

I’m voting merganser. The long, thin beak and wispy tuft of feathers at the back of the head, along with the diving, sounds mergansery to me. Of course, there’s more than one kind of merganser, but I’m not prepared to get into that.

Dinsdale could your second thing have been a grebe:

Here’s my buddy’s response to my original description:

good description. only addition is that beaks were pointy.

Talk about the both of us being as useful as tits on a bull!

Dinsdale could your second thing have been a grebe:

The second thing clearly had a duck bill. I seriously thought it was a young duck or goose. Then I realized it was all alone which is unusual. Then I realized it was too early/cold for any ducks/geese to hatch up here yet. Then I decided there was something odd about the way it swam. In addition to the legs looking further back, it kinda subtly extended its neck forward while swimming, instead of how I’m used to ducks pretty much “sitting upright.” Looked a little more “stremlined” than my idea of a stereotypical duck.

Good god - could it be yet another new species? I’m on a roll! Get out the honorary Audobon society membership!

Further news from my fellow ornithologist:

*I think there was white areas other than just around the neck. I can’t recall exactly where, however, I’m guessing that it was somewhere in the wing area. We should have thrown something in their direction to see them take fight. I believe the beak was very pointy like a crane’s for skewering minnows or picking things out of the sand/mud.

The females were pretty bland. No noticeable white areas. Like a sparrow brown color.*

After a long time spent with Peterson’s last night, the closest I could find was the red-breasted merganser.
And the second mystery duck could well have been a pied-billed grebe.
But I’m far from sure of either.

As I’ve said before, I find it VERY frustrating to try to ID birds.

The ducks/mergansers yesterday were in plain sight, but probably 50-100 feet away. And I was right above and no more than 10-15 feet from the “grebe.” But not trying to ID birds regularly, I forget what I am supposed to be looking for.

I also imagine it gets easier the more you do it, because you are more familiar with the various possibilities, and as such, are able to check for distinguishing marks. For example, with the grebe the ringed bill would have been a dead giveaway, but the word “grebe” never entered my mind, and even if it had, I had no idea what they looked like.

From the images I see on line of a single species - say the red-breasted merganser - there seems to be a lot of variation within that single species, depending on lighting, what the bird is doing, etc.

How often do birders essentially say, “Well, it HAD to be x, because it clearly wasn’t y or z - even though it doesn’t seem to exactly conform with x”?

Here are some other grebes

Here are some other grebes

Thanks.
I really don’t think it looked like that. Mainly because I didn’t notice the bill to be anything other than what I would expect on a duck. I got a really good look at it both running out and coming back. I seriously thought it looked like nothing other than a happy little duck swimming about by itself. But what I remember looks less unlike the pied billed grebe than any other candidate I’ve been able to identify.