NASA begins to powerdown Voyagers. (mission will continue, but with less instruments)

Now, some news are reporting this as a complete power down, they are missing that it will be some instruments going down to save power. Mission will likely continue until 2030! Their original 4 year mission * was extended again, not ended. 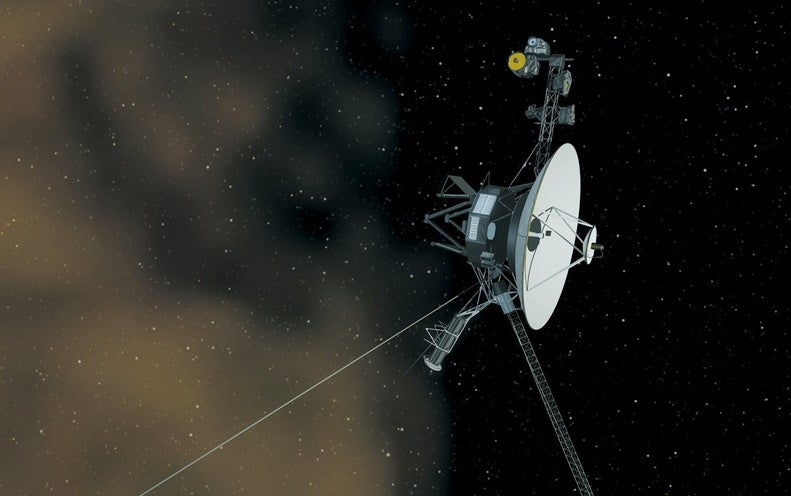 The pioneering probes are still running after nearly 45 years in space, but they will soon lose some of their instruments

So when these probes actually are powered down will NASA still be able to track them? Is there any way to see where they are rather than just make an educated guess (“last we knew Voyager 1 was traveling in x direction at y speed and z time has elapsed since last confirmed contact so the probe should be right here” ::points to spot on Big Map of Space::)?

Basically the radioisotope thermolectric generators that the Voyager probes have are running out of juice. Since they work by converting the heat of radioactive decay into electricity (essentially a whole bunch of thermocouples surrounding a thermally hot radioactive source), the heat requirements dictate a pretty short half-lived radioactive element.

In this case, it’s Pu-238, with its short half life of 87.7 years. Since it’s been 45 years since the probes were launched, a significant amount of Pu-238 has decayed, which almost certainly changes the amount of heat, and by extension, electricity that can be produced.

So NASA is shutting off non-essential instruments to conserve power. By 2032, it’s expected that it won’t have enough power to communicate with Earth anymore.

So when these probes actually are powered down will NASA still be able to track them?

NASA maintains periodic communication with the Voyager 1 and Voyager 2 spacecraft through the ground-based Deep Space Network. This is not a non-trivial challenge given the distance of the 20 watt transponder but upgrades to the DSN system has allowed continued communication with the probes and the invaluable observations they are still providing. Once they drop below the power necessary to run the transmitter and other vital systems they’ll essentially become invisible; not producing enough residual heat to find against the interstellar medium background and not enough material to produce a radar or laser return. They’re still on a ballistic path so their general trajectory should be traceable but perturbations will increase the error over time until they are essentially lost in interstellar space.

By 2032, it’s expected that it won’t have enough power to communicate with Earth anymore.

Well, until the service mission.

…until they are essentially lost in interstellar space.

This should make you weep then… 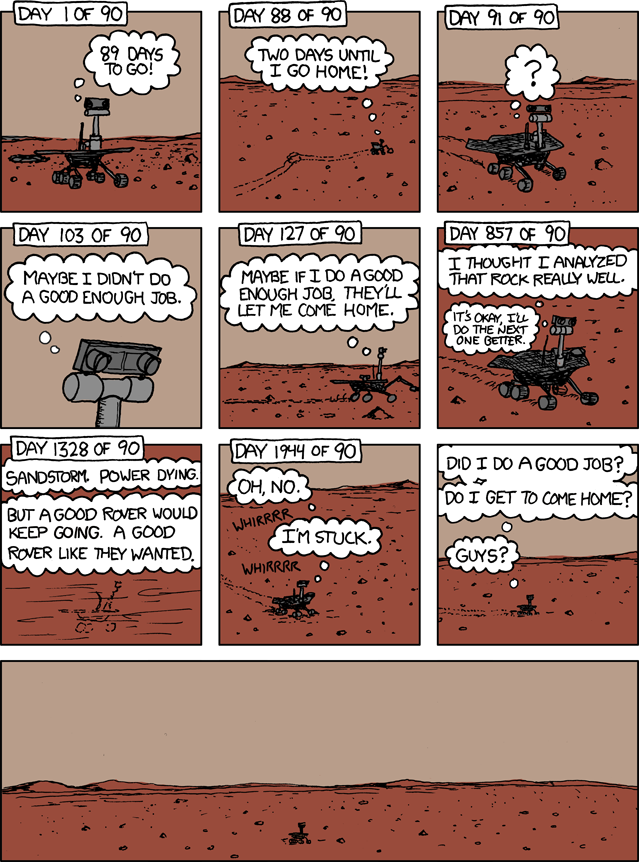 On January 26th, 2274 Mars days into the mission, NASA declared Spirit a 'stationary research station', expected to stay operational for several more months until the dust buildup on its solar panels forces a final shutdown.

Edit: I had exactly @Zakalwe’s thought and link and even used almost the same words. Which I just now edited back out as redundant. Mars ninjas are the worst kind.


Somewhere deep in the ocean are the chunks of Magellan’s, Columbus’s, and many other explorer’s ships. We’ve been scattering the tools of our pioneering efforts far and wide for a long time. May we continue to do so for many more millenia.

They’re still on a ballistic path so their general trajectory should be traceable but perturbations will increase the error over time until they are essentially lost in interstellar space.

Until V’Ger returns (you forgot that part).

I’ve seen the historical record of it.

As long as the transmitters are still working, we can track the transmissions. And the transmitters inherently must be the last instruments to shut down, because no other instrument does any good if it’s not transmitting its data. Eventually, they’ll be reduced to nothing at all but the transmitters, and we’ll still be getting useful data from that, because even just knowing where they are and how fast they’re going tells us about the things that are perturbing their path (see, for instance, the “Pioneer Anomaly”, where one of the Pioneer probes had a slight acceleration that wasn’t (at the time) accounted for).

Most likely, the transmitters will never be deliberately “shut down” at all, and just get weaker and weaker until we can’t detect them any more (both from the RTG decaying, and from the ever-increasing distance). There’s no point in sending them a shut-off command, because worst-case, it costs nothing to just ignore them, and we might build more sensitive receivers and decide to start listening again.

EDIT: Oh, and I should also mention that they’ve passed the point where we expect to learn anything more from most of the instruments. Not too long ago, they passed through the heliopause, and it was interesting on several levels to watch that transition. But that transition is now completed, and we don’t expect there to be any others at any point even into the far future (long past we’d have any hope of continuing to get data).

…until they are essentially lost in interstellar space.

Yes, it’s kind of sad. But I like to think of the people who built some part of the Voyager spacecraft, even tiny, insignificant bits like a screw or a sensor. Those things they built might outlast everything on Earth.