Even the earliest nuclear bombs had safety interlocks on them. We’ve dumped a number of nukes over the years, and none of them went off. One got close, but the last interlock held.

The technology of nuclear weapons involves a lot more stuff making sure it doesn’t go off when you don’t want it to. Making it go off is not all that hard. Just blowing one up from the outside won’t blow it up nuclear. Might break it up, and spread the nuclear material around, but but no huge mushroom cloud.

Not necessarily. I’m not an expert in the subject, but my impression is that nuclear weapons are rather complicated devices, and there’s a precise sequence of things that needs to happen inside of it in order to get a big explosion that probably wouldn’t be triggered by a rap to the side of the case.

Oh, and here’s a brief article describing why simply dropping a nuclear weapon isn’t likely to detonate it.

Normally, no. However. one of the defects of the design for the “Little Boy” device dropped on Hiroshima was the possibility of the U235 target assembly going critical if it was immersed in water, a neutron moderator. If armed, anything that caused the gun to fire would produce a full-yield detonation. The simplicity of its design made it unsafe.

Years ago, I read a book called (IIRC) “One of or H-bombs is missing”. It was the true story of a US bomber (B52?) and tanker that collided just off the coast of Spain, spilling 3-5 (I forget exactly) Hydrogen bombs. A couple (3?) of them landed on a small island, but 1-2 ended up in the drink and took a while to find.

In addition to documenting the search and cleanup, the book went into a lot of detail about past accidental dropping of nukes. Again, IIRC, there is at least one that sunk in a swamp and was not recovered dispite heroic efforts.

LinkTo book details. My memory was pretty good considering that I read this in the late 70’s.

An important point is the Enola Gay “Little Boy” bomb was different from all other bombs involved in nuclear accidents or in operational use today.

Little Boy was a gun-type bomb that fired a U-235 slug into a cylindrical U-235 target. Nearly all other bombs (whether fission or fusion) have an implosion-type fission core. Namely they require precise spherical detonation of many enveloping high explosive segments to create a implosion pressure wave which squeezes a plutonium core to critical density.

There are various electronic safety devices that prevent this from happening. Even if they all fail and the bomb hits the ground, it’s very unlikely the many spherical high explosives segments will all detonate in the perfect sequence required for a nuclear explosion.

With Little Boy, it was different. The slug was held in place through simple friction. It required a lot of G force to move it, but in theory a forward crash with the right parameters could have done it, even if the high explosives did not detonate. http://en.wikipedia.org/wiki/Little_boy 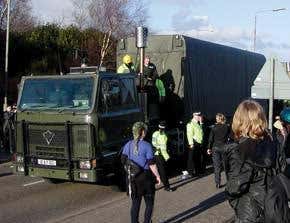 While three employees were dismantling the high explosive (HE) components of a nuclear bomb, they began burning spontaneously, triggering a large blast involving 120 pounds of HE. The explosion caused little contamination.

What they hey?! Talk about incorrect antecedent agreement. On my first pass, I thought it described spontaneous human combustion.