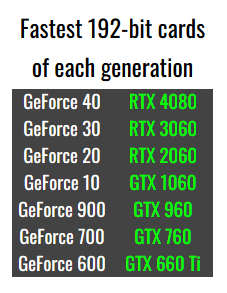 To go with that someone in the Reddit thread posted this (along the lines of the table @Pleonast posted above but with xx60 prices):

So, Nvidia has decided to play the unalloyed naked cash grab card.

I mean, beyond their previous levels of naked cash grab.

Supposedly AMD is revealing their new RDNA card lineup on November 3 (I think). If you (general “you”) are in the market for a new card I would definitely wait and see. I have read the new RDNA cards have crazy clock speeds out of the box (like 4GHz) but Nvidia cards still have more overall horsepower. Regardless of the truth I would wait a month to see how it plays out.

I fully expect them to be less expensive. The question is how much less? Will they stick it to Nvidia or charge as much as they can while being a bit cheaper? I suspect the latter. If they seriously undercut Nvidia then Nvidia could just lower prices to match (or be close enough).

Somebody has spent today trying to keep all 4000 series criticism off the relevant Wikipedia page having declared it the work of AMD fanbois.

The IPs removing that info have been blocked. I’m tempted to try to drop a note about the need to discuss this with the relevant parties in that content dispute (and avoid edit-warring), but another admin is handling it, so I don’t think it’s necessary.

This kind of thing happens constantly there. That’s part of what an admin does, dealing with this stuff. (Actually, handling content disputes is the main job of an admin.)

Some more details on the upcoming AMD cards. The picture below is speculation and was grabbed from this YouTube channel. I have NO idea if he is right. The equivalent (supposedly) to a RTX 4090 would be the next to last card in the list…the RX 7950 XT.

Again…big grain of salt. Until these hit the streets and we see independent testing done and actual retail prices this is all guessing. 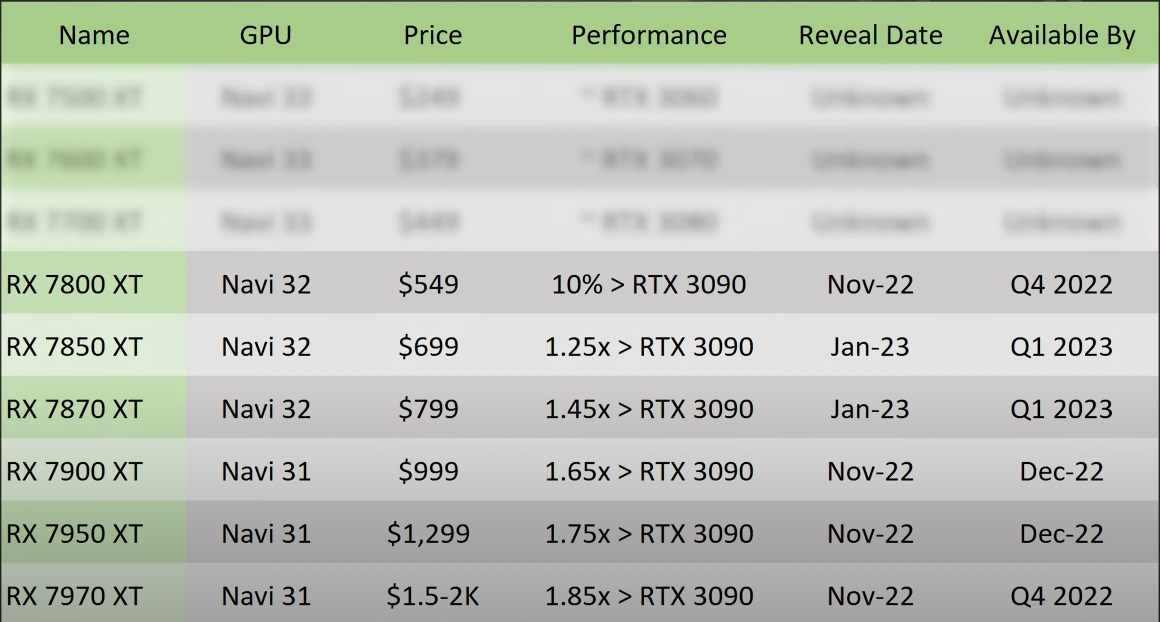 I think they decided they are going to be limited by the chip shortage for a while anyway. Why let the scalpers double the price when they can do it themselves?

I was looking forward to upgrading my 2070 super to a 4080 but I will be waiting for the prices to drop substantially, by which time the 50 series will probably be coming out…

My God, that sounds monstrous!!

My approach has always been that “number one” is going to be too overpriced and not dramatically superior to the 2nd tier cards, so I have never bought “number one” in the past. So, were I in the market for a new card, I’d probably go with the 12 Gig card.

Consider that there is a really good chance you will need to upgrade your PSU to run these cards. I am not sure about the 4080 (either of them) but the 4090 needs and ATX 3.0 power supply to run well (there are adapters for older power supplies but there is concern about those ). Nvidia recommends a minimum of an 850w power supply for the 4090. So, add a few hundred more dollars to the price.

Also, ATX 3.0 power supplies are only barely hitting the streets now. You may find them difficult to find and priced at a premium for a few months.

In for a penny, in for a pound

These are enthusiast cards. The only reason to be buying them is if you’re going to be running top end processors (and overclocking them) which is also going to increasingly require a new PSU because motherboard power standards are changing away from the old 24-pin as well. And, of course, a high refresh rate 4k screen… at least until you can start getting 8k screens.

According to the Steam Hardware survey, the average PC gamer is on a 1080p screen and using probably a non-overclocked i5 processor, likely a couple generations old (it doesn’t break it down by retail processors but the most common is a 6-core Intel at 2.3-2.6GHz). Only 2.54% of users are gaming at 4k, only 2.6% of users have a 12-core (like an i7-12700) processor and only 0.7% have a 16-core like an i9-12900. While having to buy a new PSU might be annoying, if you’re not in that group you shouldn’t be seriously considering one of these cards and should be waiting for the 4070 or below models (or trying to buy a cheap 3000-series when you can). If you’re not in that group and want to significantly upgrade, you should be waiting for the new power standard anyway so your PSU is better than for one remaining generation.

According to the Steam Hardware survey, the average PC gamer is on a 1080p screen and using probably a non-overclocked i5 processor, likely a couple generations old

My 1070Ti runs everything at max settings smoothly on my 1080p screen.

I doubt there will be full debugged driver support for the juiciest bits for months after release. You’d get nearly as much practical value by putting the card in a display case.

If I hadn’t just dropped 1500 bucks on a bunch of Virpil gear I would probably be less hesitant for the current pricing scheme.

If I hadn’t just dropped 1500 bucks on a bunch of Virpil gear I would probably be less hesitant for the current pricing scheme.

They did showcase MS Flight Simulator as benefitting a lot from the new cards.

These are enthusiast cards.

Those are the cards people new to PC gaming will be buying. Once the 30xx stock sells out they’ll need to buy the 40xx stuff. Same for people whose 10xx/20xx card dies and they need a replacement. That or people will have to buy used cards.

(I am ignoring AMD here for the moment.)