Given that there was a 40 minute firefight in the place, you expect some disorder…bt OBL’s “mansion” looked like a dump to me-crap everywhere, and filthy looking carpets everywhere.
Granted, his digs were better than a cave in Tora Bora, but the place in Abbottabahd hardly looks like luxury to me-more like a slum apartment.
Was this guy really in control of anything? It looks like he may have gradated to “emeritus” status…bt the filth and clutter of this place is pretty surprising.

To be fair, the place had been ripped apart and blasted and shot to pieces by a bunch of Navy SEALS.

I would think a large part of the price is so the Realtor keeps their mouth shut.

Lack of servants maybe? Outside help would tend to be avoided and it’s a family used to being rich.

Five million? Really? Everything I’ve seen quoted one million, and I’ve even seen articles challenging that figure. Where’d you get that number?

I think the correct term is “Lair”

I think the correct term is “Lair”

No, no; if it was a lair it would have exploded in a huge fireball behind the SEALs as they rappelled back up into their helicopters in the nick of time.

I noticed that. The furnishings looked like they came from the Islamabad branch of IKEA, and the brickwork was pretty shoddy. That little wall thing on the very top of the house looked like I could have built it.

It occurs to me that when the main resident of the building is a terrorist mastermind and most wanted man in the world, that outside maid services and extravagant purchases of furniture would be avoided.

The millions went to ISI safehouse. he was paying for protection.

The only thing surprising to me, according to the news I’ve heard on the television, is this was a high populated area of well off Pakistanis. I’m surprised people living in such an area would keep quiet that he was there.

It occurs to me that when the main resident of the building is a terrorist mastermind and most wanted man in the world, that outside maid services and extravagant purchases of furniture would be avoided.

If I’ve learned anything from films it’s that evil masterminds live in grandiose and conspicuous secret lairs.

I wasn’t impressed. They seem to have made the place conspicuous by fortifying it, but they didn’t fortify it enough to actually help defend against a military raid, just casual burglars and nosy neighbors. All the downsides of fortification and none of the upsides. It seems to me like they could have taken some steps that would have made things a lot harder for us.

If I had to hide out in that place, I would want to have an escape tunnel that led to an ordinary-looking nearby house. I’d also want more defenses. Maybe some mines in the courtyard, or at least obstacles against landing such as trees or something. Also, they could have really ruined our day if they had lined the whole compound with bombs that could be set off if it was overrun. That could have killed the attackers, made ID of Bin Laden difficult and prevented us from taking his documents.

Yeah-you would think that OBL could have afforded a $500 security system. Also, I was listening to the BBC News yesterday-they interviewed a retired Pakistani Army brigadier general-he was of the opinion that OBL’s presence was well known to the ISI. There is the persistent rumor that OBL was in poor health (kidney failure) and needed weekly dialysis-this general said that he was unable to walk.
My question: was OBL still flush with cash? It sonds like he was relegated to a minor role in Al Quedah-it is hard to see how he would be running things from his dump/mansion in Pakistan.

I don’t know, the place is getting good reviews on Google Maps… 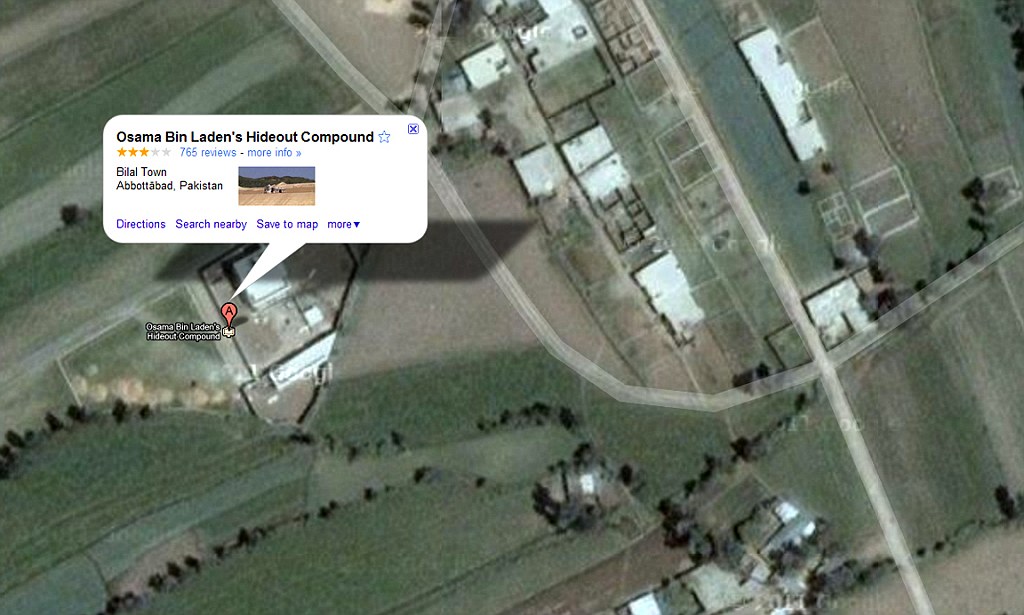 Under 24 hours after Obama announced that the Al Qaeda leader was dead, Google pinpointed his hideout online, leading to hundreds of 'reviews' for the area.

Five million? Really? Everything I’ve seen quoted one million, and I’ve even seen articles challenging that figure. Where’d you get that number?

Concur. What’s with the relentless inflation and exaggeration of news items? After all the talk about John Edwards’ $400 haircut, I later saw references to an “$800”
haircut, as if $400 isn’t bad enough.

CNN right now has a front page story referring to the “$1 million residence.” Where did you see $5 million?

I don’t know, the place is getting good reviews on Google Maps…

This is some funny stuff!