The union is saying that 1 local authority out of 100s had COVID rate of 333% higher than the surrounding area: the school teachers were the local hotspot. And the union has it’s own political party which it financially supports, which is in political opposition to the UK government. So you could be forgiving for thinking that this was just politically motivated cherry picking of anecdotal evidence.

Except that when you read the article, it reports that the government has been saying that schools are safer than other workplaces, and are actually “safe”, and that the union is saying that “Well, that clearly is not the case. Unless, of course, strong mitigations are put into place.”

– the cherry picking of anecdotal evidence is actually from the headline writer, not from the union.

I keep saying that the issue should not be framed as parents want schools open/teachers want them closed, and I finally found some data. This is from an article in the Texas Tribune (linked below):

Texas is requiring all districts to allow in-person learning for all students who want it, with few exceptions. A state survey at the end of October showed 2.8 million of 5.5 million students were learning on campus, meaning millions were still learning remotely.

Given that the article was published today, I assume this is the most recent data we have. In October–when COVID wasn’t so bad, most places–half the population was keeping their kids home. I’m also sure that’s not evenly distributed, and communities with more community spread are likely the ones that kept their kids home. This has two implications–one, getting kids back in school isn’t just a matter of changing state regulations, and two, studies that show low spread in school may not be particularly accurate, if they don’t take this into account. Of course we have low spread in my school–no one is there.

STAAR test must be taken in person, Texas says | The Texas Tribune.

In Spain, the schools have become the leading source of Covid cluster for the first time now that the bars, restaurants and gyms are limited. This is the opposite case of most places in the US. In Spain,schools are open and everything else is closed or limited.

As new coronavirus cases continue to drop in Spain, data released by the Health Ministry on Friday suggest that schools have become the leading source of clusters over the last week.

Looking at the 1,678 coronavirus outbreaks detected over the last week in Spain, schools were the main focal point for contagion, overtaking for the first time other single settings like social or family gatherings, nursing homes, healthcare centers or workplaces.

The Health Ministry did not comment on the reason for this, but several factors are likely influencing the figures.

First, most regions of Spain have enacted measures that limit the number of people allowed to gather. Bars, restaurants and gyms have likewise seen limitations and the country is under curfew, with an aim to reduce social activities.

However, throughout a devastating third wave of cases, Spain opted to leave its schools open.

I find it more than a little telling that during a time while public discourse has begun to include a (long overdue, if you ask me) debate about whether remote learning is failing our youth, this thread has remained dormant, only to be resurrected by the posting of an article that would seem to convey a least a subtle implication that keeping schools closed is, by a certain metric anyway, the right thing to do.

[As an aside, as best I can tell this ‘story’ comes from a Turkish source and has not been reported elsewhere. I’ll just say that if you’ve spent the time in Turkey that I have, this might not come as a particular surprise. But then again, a competitive sense of nationalism (tribalism?) is far from a rare strain throughout this entire ordeal, so now is perhaps not the time to find exception.]

Here’s a tweet that caught my eye today, coming as it does from one of the analytical darlings, on this board and elsewhere:

A @CDCgov report in Jan concluded that "university counties with in-person instruction experienced a 56% increase in incidence". They only examined 21 days before/after classes start. Since then, those counties saw a much lower incidence vs counties w/remote instruction. 🧵

A CDC paper last month found that Kansas counties with mask mandates saw a decrease in cases in Aug, while counties without mandates saw an increase. Since then, both groups saw a huge surge. Counties w/mandates are doing a bit better, but it's difficult to determine causation. pic.twitter.com/aqKGHYLLtf

He demonstrates an error in reasoning that has become, it is sad to say, more expected than not from many ‘analysts’. See the ‘zoomed out’ image: 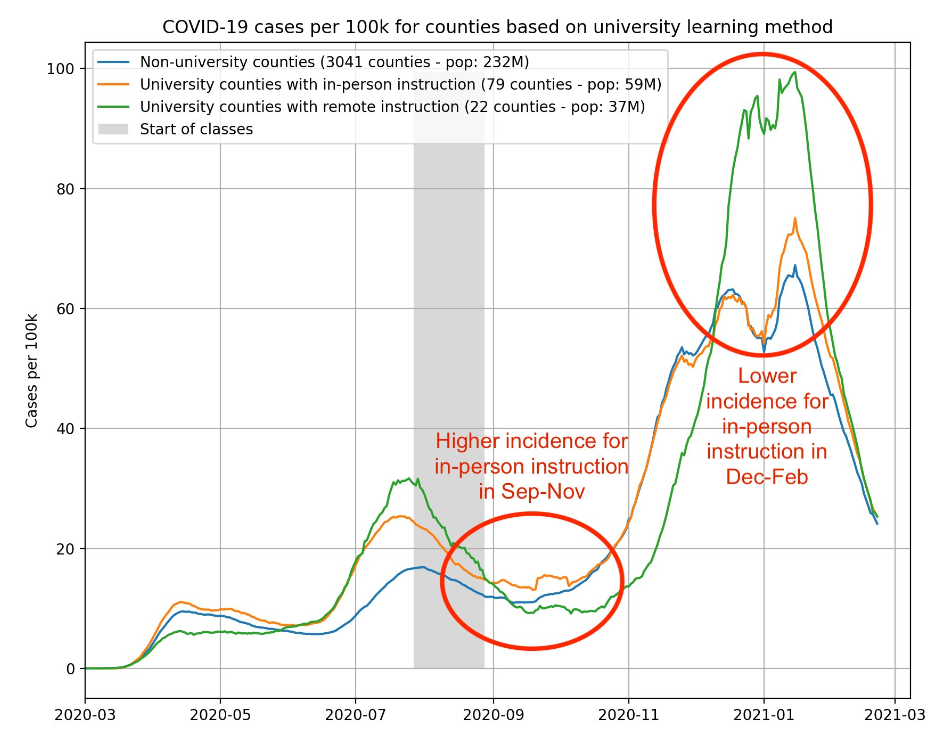 And some choice quotes from his analysis thread:

Contrary to what many believe, remote instruction did not decrease county-level incidence during the fall surge, when compared to in-person instruction.

What happened here is similar to the CDC study on mask mandates. Short-term correlations do not necessarily lead to long-term causal relationships.

They should not be used to set/influence policy, especially one as important as education.

Whether this is done intentionally or not, it is a dangerous precedent.

To conclude, the data does not support the claim that in-person instruction at colleges and universities lead to increased COVID-19 incidence and deaths in the long run.

Existing debates about schools seem to be more driven by politics than science, unfortunately.

You can take that last line and apply it to a lot more than schools, I’m sad to say.

this thread has remained dormant, only to be resurrected by the posting of an article that would seem to convey a least a subtle implication that keeping schools closed is, by a certain metric anyway, the right thing to do.

I am not implying or stating that schools should be kept closed indefinitely. That’s a straw man that you’re using in the Sweden thread and one you’ve used time and again. There are a lot of factors to be considered in schools going to remote learning. This article was one data point in that analysis.

I have a file with multiple links from the last couple months on this topic. My absence in this thread has to do with not wanting to deal with your innuendo that I constantly have to refute. It has gotten tiresome. The absence doesn’t have to do with a lack of data on the subject.

The fallacy in the Sweden thread is the oft-repeated claim that Sweden ‘fucked up’ as evidenced by one metric and one metric only, and a highly cherry-picked comparison made with it at that. The flag I’m waving in that thread is that any serious analysis of whether a decision is/was good or bad will consider all factors and all data points. Sounds like the same kind of thing you’re trying to get at here. And good. If someone is going to make a bad or foolish or dishonest argument, their feet should be held to the fire.

I am entirely happy not to make inferences about your implications in this thread. What, then, was the motive for broadcasting the Turkish ‘analysis’ of Spanish data, out of the many links and data you mention having in your file?

I don’t want to speak for you. I’m interested in hearing you speak for yourself. Unless I misunderstood you, here you said Spain is doing the opposite of most places in the US, and then you cited a study that appears to paint their actions in a negative light – or at least, highlight its associated risks. I think the logic that follows from that is clear.

Here’s an article in the Nation that makes some interesting points.

West Coast States’ Failure to Reopen Schools Is a Disaster

The ongoing closure is creating an educational, social, and mental-health crisis.

The author talks about unintended consequences that came along with a ‘zero-tolerance approach to crime’ in the 1990s, and then says this:

What is happening on the West Coast with schools and Covid-19 is, I fear, a version of that war on crime playing out all over again. The coronavirus will be with us, in one form or another, forever; it’s a respiratory disease, like tuberculosis. We can and we must tame it. We can and we must find ways to limit its transmission. We can and we must vaccinate as many people as possible. But, just like TB, it will probably still circulate despite our best efforts. Unless we are willing to abandon urban culture—to permanently shutter schools, museums, theaters, sports venues, and concert halls—we are going to have to learn to coexist with the novel coronavirus.

And then pulls off the most damning use of a one-word parenthetical I think I’ve ever seen:

Most big-city public schools on the West Coast have been shut for a year—though that hasn’t stopped the zealots on San Francisco’s school board from devoting vital time and energy to removing the name “Lincoln” from (empty) schools.

That’s not a look those leaders will wear well for long.

And then back to the nuts and bolts of it:

The ongoing closure is a social catastrophe… A mental health crisis, including growing numbers of suicides, is burgeoning among school-age children. A generation of kids is spending eight-to-12 hours a day glued to computer and phone screens—which, as any behavioral scientist will tell you, is not conducive to healthy brain development… Kids are not socializing in a meaningful way, developing new friendships, learning to navigate the complexities of social interactions, or, for that matter, doing the sort of deep learning one gets from direct conversation with a good teacher.

All of which is why so many middle-class parents are abandoning public school and putting their children into already-open private institutions.

For an adult, two years is a long time; for a child, losing 18 months to two years of in-person instruction is an eternity. Many of these children will never make up the lost ground. It will likely affect them socially, educationally, and economically for the rest of their lives.

Those are the kinds of arguments that are hard to attach data points to. But they are no less powerful for it.

I suspect it’s a combination of having stronger extended family networks, and having access to low-cost or free childcare elsewhere (e.g., through church, the Y, etc.) That’s what I’m seeing in my community, although I’m far from a statistical analysis or even a large sample.

My observation is that lower-income parents are more comfortable with latch-key kids, at younger ages. And also, lower-income adults are likely working outside their home, so it’s not inconvenient for them if the kids are at home during the work day. And frankly, in the school I am volunteering “in” (I was in the school, now I join them over zoom) the families are much less worried about the academic achievements of their kids than higher-income parents tend to be.

I’m sure a lot of them also have an aunt who was caring for the kids pre-covid and can still do so. But these other factors also differ between the high-income suburbs and the low-income city schools.

A Bay Area school district plans to reopen for one hour a week. It isn't...

A South Bay school district’s reopening plan that would return students to campus for...

That cite is paywalled. Please, what did it say?