How about Tuesday Weld?

Teri Garr for Yeoman Rand. She can play her 20th century g-g-g-g grandmother in ‘Yesterday’s Enterprise’,

Chekov - Davy Jones. He was based on him anyway. If not, Ricky Nelson

I realize the OP calls for alternate actors for the existing parts, but I’d like to nominate Donyale Luna for a new role. Spock was the only alien on TOS, and he was actually only half alien. I think another alien on board would have been cool. Tall, 6’, slim and graceful, with a beautiful exotic look, she would have made an awesome alien crew member. She was stunningly gorgeous too. 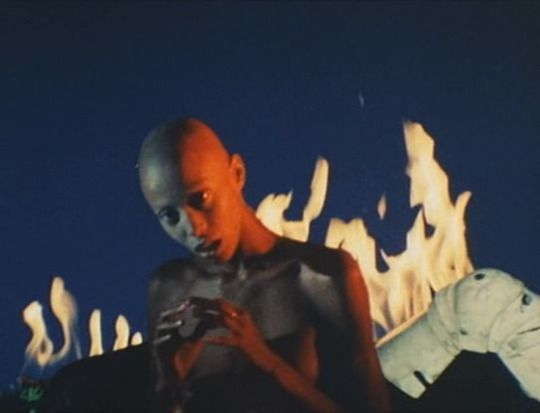 I loved her as “God’s Mistress” in Skidoo.

OK, you have something there.
Pepe LePew must be Kirk.
Yosemite Sam for a Klingon is good.
Porky is good, and Wile E. Coyote. Bugs is outstanding. “That’s not logical, Doc!”
Daffy, maybe.
Uhura, not the road runner, although there is a certain charm in not being able to understand your communications officer. How about Marvin? “Where is the message? There was supposed to be a very important message!”

Yosemite Sam for a Klingon is good.

This is a mash-up of the cast of the 1965 Woody Allen movie What’s New Pussycat with that of an under-appreciated 1959 noir thriller, The Crimson Kimono.

Of course Glenn Corbett would then not have been available to play Zefram Cochrane; that role could have gone to James Cromwell, who was 27 at the time of the Original Series episode “Metamorphosis.”

Personally, I would like to have heard Woody Allen grouse ‘I’m a doctor, not a ________’ in episode after episode. He would have gotten the laugh every time. And Richard Burton would have provided a flawless Scots accent as Scotty, I’m sure (not that Welsh is the same, but there are some similarities).

The Emmy Awards would have abounded.

And Richard Burton would have provided a flawless Scots accent as Scotty, I’m sure (not that Welsh is the same, but there are some similarities).

But you can spell Scottish place names.

You go on to explain how you got there, but with that running start from the first two I thought you were going to go all-British — raising the question of whether McCoy’s “Damn it, Jim” reminders should involve Cockney exasperation from Michael Caine or posh condescension from Roger Moore.

At nine years younger than Leonard Nimoy he might be just slightly too young but I reckon Patrick Stewart would have been fine as Spock. Would have meant no Captain Picard though.

At nine years younger than Leonard Nimoy he might be just slightly too young but I reckon Patrick Stewart would have been fine as Spock.

At three years older than Leonard Nimoy, how about Patrick McGoohan?

If we’re going there…

I don’t get a ‘Spock Vibe’ from Patrick McGoohan. I see him as Captain material but since Kirk was the great lover and McGoohan famously refused love scenes (including just kissing actresses) he’s out there. But I could see him as a Doctor McCoy.

Then again, Robert Vaughn could do McCoy and as I mentioned upthread David McCallum would be great as Chekov allowing for some fourth wall breaking meta-humour as well.

I don’t get a ‘Spock Vibe’ from Patrick McGoohan.

See, I figured on getting a vibe of ‘Choosing His Words Very Precisely While Making It Clear That He Thinks He’s The Smartest Guy In The Room And, No, He Doesn’t Think It’s Especially Close, But He’s Not Emotional About It; Just Patiently Spelling It Out’ from McGoohan — which isn’t exactly Nimoy-as-Spock, but which I think could work great for Spock.