Came across an amusing article, about whether pet owners should allow pets to see them naked. I personally don’t think they care, and two of the three cats I’ve had in my adult life (neutered male, believed to be Maine Coon mix, and spayed female, believed to be Siamese mix) have thought hanging out on the edge of the bathtub to get drinks was great. Third cat (basic generic cat, neutered male) doesn’t do that, but he and the Siamese mix both seem to think I require an escort when using the human equivalent to the litterbox. MC mix figured I could handle that on my own.

BGC is a bit on the pouncy side, so I’ve suggested that DH be careful with nudity around him for safety reasons. I confess to ejecting cats from the bedroom when the humans are mating, since I have a probably irrational aversion to having spectators of any species. 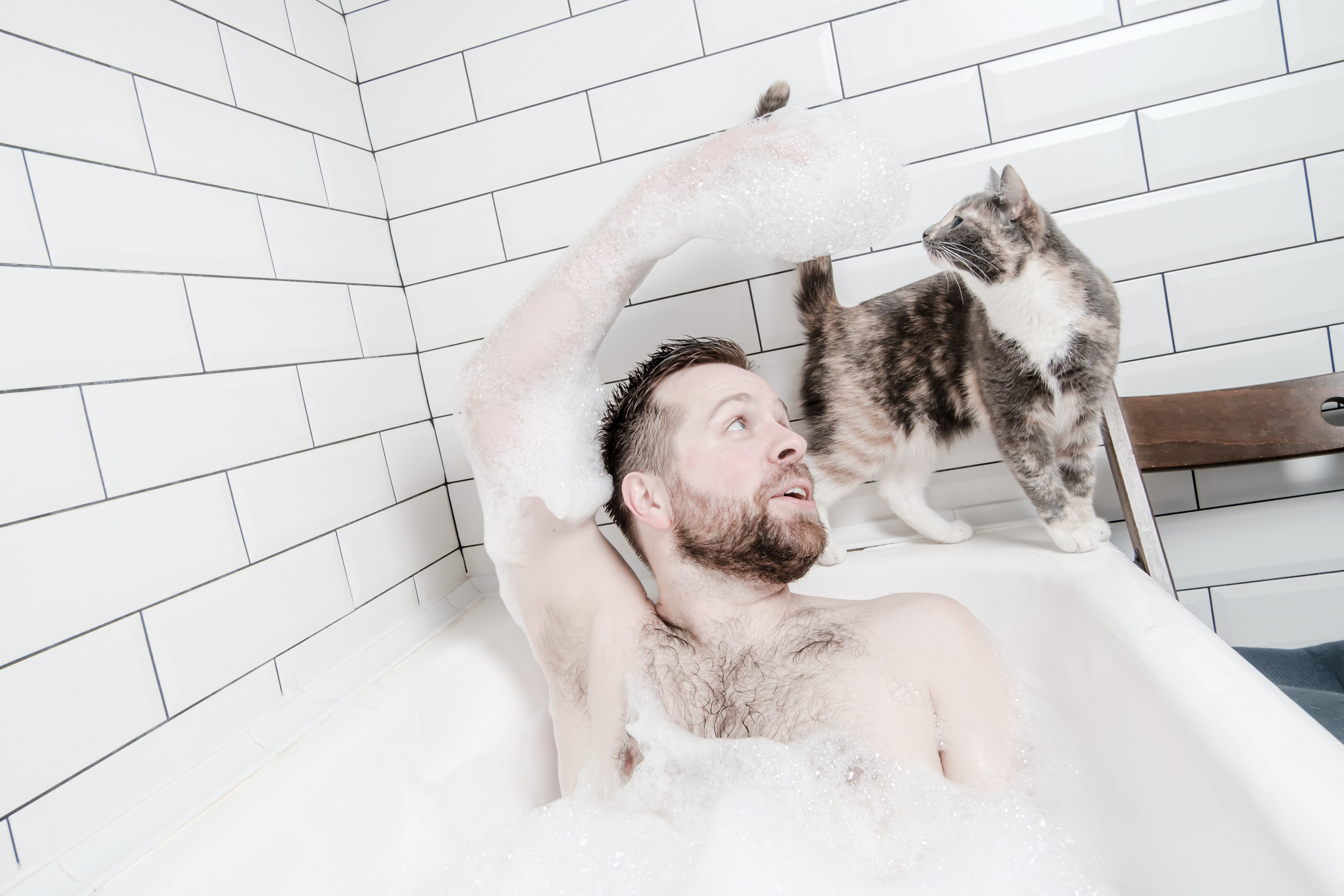 Does having your dog or cat see you naked feel weird? You're not alone, but many pets will "not care" either way, according to some users of Mumsnet.

I confess to ejecting cats from the bedroom when the humans are mating, since I have a probably irrational aversion to having spectators of any species.

Our pets, historically, ignored us during carnal activities, with one exception.

One night, while we were in the middle of the action, our dog quietly got up onto the bed behind me, and was clearly curious as to what was up. I suddenly had a wet, cold dog nose sniffing me in a very delicate location. It proved to be a mood-breaker at that moment, but decades later, we still laugh about that incident.

Ditto on the lovemaking. Dog feels left out.

I figure if they can watch, smell, and hang out on purpose with you when you crap, seeing you naked is no big deal.

Mumsnet - where you can obtain proof positive that being a total jerk and a fool does not disqualify you from motherhood. As if that needed proof.

I’ve never had a pet that reacted one way or another to seeing me naked.

Our previous Doberman would be horrified, tearing at the door to get out, if one of us so much as put a hand on the other.
The current pack of dogs merely wants to know who’s next in line.

My horse gets jealous.

I’ve never had a pet that reacted one way or another to seeing me naked.

Like so many other folks, we lock our cats out when mating snerk because many years ago, one of them got interested in the bouncing balls.

However, when The Best Cat in the World moved in, Very Bad Cat wouldn’t allow him in the master suite. This meant that he had never seen me without my fur. All was good until the fateful day a year later that our water heater died in the middle of the winter. That night I heated water on the stove and changed into my thick robe before coming out to get a sink wash. I dropped my fur on the floor and TBCitW fluffed and peeled out in his hurry to go and hide under the loveseat for a couple of days.

I live alone, and I do close the door when I take a bath, because my cat (and the one before her, too) would jump up on the counter and bat things off - the only time they would ever do that in the bathroom, so go figure.

My cat has definitely seen too much of me and her to go back to modesty.

When I met Wife, her dog was 6 months old and evidently had never seen a naked human male. One morning I stepped out of the shower when the dog was lying outside the open bathroom door. As I toweled off, her eyes dropped to my privates. Her ears pulled back, her pupils opened, and she stood up, ready to flee. She was clearly and justifiably horrified that some of my internal organs had spilled out. She approached with extreme caution, gave me a sniff, and never reacted again. It was a creepy experience for both of us.

I’m naked pretty much 24/7. My 5 cat’s attitude vacillates between amusement, disgust, and embarrassment, particularly when guests, repair people, and neighborhood pets are in-house. The cats, however, always remain fully clothed.

A long time ago in a galaxy far away, when the “streaking” fad was fading out but not quite gone, I and a date went walking along a hiking trail in the Berkeley hills. We encountered a male jogger, jogging in the buff.

We agreed that it was probably less disturbing to the local wildlife that way.

I’m afraid to jog naked in the park lest a group of aggressive chimpanzees attacks and focus on my dangly bits as the first thing they pull off. Once was enough. Never again.

Naked jog all you want. They’re not growing back.

So…you’re saying it’s not like an octopus regrowing an arm? I must have misread the word “tentacles.”

…Somehow I remember this as the punchline of some dirty joke my father told me about a military doc diagnosing a soldier in Vietnam or something or other in some random jungle.

hang out on purpose with you when you crap

They’re standing guard for you while you are um…occupied. Dogs appreciate it when you do the same for them.

A long time ago in a galaxy far away, when the “streaking” fad was fading out but not quite gone, I and a date went walking along a hiking trail in the Berkeley hills. We encountered a male jogger, jogging in the buff.

Shortly pre-COVID on a summer day in San Francisco near Aquatic Cove not far from Ghirardelli Square in the midst of the city I encountered about 30 bicyclists out for a ride enjoying the sun. All nude. About 2/3rds male, 1/3rd female.

As this was in 2018ish nearly all the nearby pedestrians had some manner of annoying yappy dog on a leash. The dogs seemed far more unfazed than did the leash-holders.

Pets (and livestock) are nude all day every day. They. Do. Not. Care.

As I commented in another thread years ago. …

Anyone who’s been on this Earth for a dozen years has seen countless wild critters, pets, or livestock f***ing. Critters do that. Even hairless apes do that.

Other than for hairless apes, have you ever noticed any of their fellow critters, same species or not, paying the slightest attention to the show? Neither have I.

My current dog and all others before her have never cared about me being nude. As far as bathroom activities, ALL of my dogs have taken advantage of me sitting on the toilet as the time I am captive and must pet them. Locking them out causes them to scratch incessantly at the door, and it’s - distracting.