This might belong in Cafe Soc, but it is more of a factual question so I’ll see if I can slip past the mods <sneaks…>

In many Sci-Fi films, large objects often explode - whether they be death stars, planets or big space stations. When they do, the FX inevitably show a spherical explosion with a ‘ring’ around the centre which expands faster than the sphere. Know what I’m talking about? good. OK, time for questions:

I think they do it just because it looks cool. I doubt any thought in Hollywood is given to actual physics when filming a movie (although Star Trek did have physicists on staff who would review a script and modify it to conform as closely as possible to understood physical principles…the script still won in the end however).

The only mechanism I could think of for a ring to form in the fashion mentioned might be caused by a rotating body. Perhaps the material at the ‘equator’ has the greatest angular velocity and would be thrown from the exploding object faster than the other material. That’s just a WAG though as I admit I really don’t know.

I think explosions on the ground do look like that - the shock wave expands first, and you can only see where it interacts with stuff on the ground.

I don’t think it will happen in space. Unless, as Whack-a-Mole said, the original body was rotating. But the rotational speed must be pretty big (i.e. a fair fraction of the speed of the explosion) for it to have a visible effect.

I can understand the shock-wave coming first - that’s not really a problem - question is, why does the wave only come from the ‘equator’ of the explosion? In anycase, surely there would be no shock-wave in space, as there’s no air to carry it?

I would have thought rotation would affect the shape of the ‘explosion sphere’ - making it bulge in the middle, rather than creating a separate effect.

Bad Astronomer, are you out there? Can you help me?

They do this because large bombs exploding on the ground look like that, and it looks cool. Of course, there would be no shock wave in space, because there’s no medium to shock.

The explosion wouldn’t even have a spherical shape. Some pieces would be flying away much faster than others, but there’s no reason that you would have a large amount of stuff flying away at a “fastest” speed.

In general, Hollywood gets so much wrong in the area of physics that it’s distracting to me - I lose the suspension of disbelief and find myself fully aware that I’m in a theater watching a special effects spectacle. I guess that’s why, even though I like to think of myself as somewhat geeky, I don’t enjoy most action movies.

Some fireworks look like this. Of course, they look like that because they were designed to look like that. Perhaps the malevolant bomb designers have a similar sense of aesthetics.

Can we get some examples? I know the (revised) explosion of Alderaan looks like this in Star Wars, and the later explosion of the Death Star itself, but offhand I can’t think of other examples of this type of explosion effect.

Did the explosion of Krypton look like this in Superman: The Movie?

Seems to me that the explosion would be shaped like the blast. So that, for example, if you started with a pear-shaped explosive, the fat end would produce a bigger blast and blow away more material faster than the skinny end.

In Star Trek, The Undiscovered Country, the ring explosion happened when the Klingon moon exploded.

Not only is this depiction inaccurate, but I think it’s retroactively inaccurate. As far as I recall, the original Death Star explosion was more of a fireworks style explosion – you only got the annular ring explosion after the reedit. (I will now get corrected by legions of SW fans.)

Now in terms of a hollow, artificial structure such as the Death Star or the alien ship in Independence Day, I think the shape of the explosion would be dependent on both the force of the explosion and the shape/construction of the object. If the object is significantly more rigid in some dimension, you could get a shaped discharge. For example, if the DS had a ring of vents around its circumference, then you might get the annular shaped explosion. More likely you’d get something vaguely globular with protuberences.

Of course, the DS had some kind of artificial gravity, so that could also have affected the shape of the explosion in the microseconds before the gravity generator ceased to exist.

In the case of a planet, well, planets don’t explode, so it’s kind of a moot point. If you could somehow get the interior of a planet sufficiently molten/gaseous fast enough to cause it to explode, the explosion would probably be lost in comparison to the energy causing the explosion. Sort of like a marshmallow in a blow torch. But let’s say that instead of pumping in energy, the Death Star did something more technologically clever such as transmuting half of the planet’s core into antimatter. I imagine by focusing your beam properly, you could get any shaped explosion you want. Intuitively, I don’t think that the rotational energy of the planet would make much difference in the shape of the original explosion – we’re talking a force that’s not strong enough to reduce the weight of an object at the equator more than a hair less than at the pole vs forces that are sufficient to send that object hurtling into space. Insignificant.

I think it started with Star Trek 6: The Undiscovered Country.

I’m 100% positive that the effect was not in the original Star Wars – it was added to the special addition by computer.

That would be “edition”, not “addition”.

Wouldn’t it also depend on what caused the explosion? I know in Star Trek VI it wasn’t just every particle in the planet getting obliterated. It was some sort of power plant that blew up.

From what I recall, it was always after the main explosion. There’s a pretty cool one in “Lost in Space” after they destroy the ship with all the spiders. The movie of course, not the series.

Well, if it helps, the documentary Trinity and Beyond has footage of the nuclear tests conducted at the edge of space over the pacific…The explosions seemed pretty spherical (Of course, they didn’t have burning hunks of crust and mantle being flung about like shrapnel to throw off the symmetry like a planet might have) and, as a matter of fact, the explosions were bright blue (Plasma, I assume) rather than any other color (No atmosphere to burn). But no ring “shockwave” appeared.
Ranchoth

From what I have heard, the expanding ring is depicted because it looks cool. Also, it does mimic what you see in explosions on the ground, but of course, that wouldn’t happen for the same reason in space, unless the explosion happens next to something large, flat and dense. Save your jokes, please.

Star Trek 6 showed it first, as far as I know. In an article I wrote (and later reprinted in my book), I mentioned that the ring in the new version of Star Wars might make sense. An explosion starting in the core would reach the trench around the Death Star slightly before the surface, and that could shape the explosion into a ring. Problem is, the ring is perpendicular to the trench. Oops.

You can get rings through shaping in astronomy too, like the one around Supernova 1987A.

*Originally posted by scr4 *
I think explosions on the ground do look like that - the shock wave expands first, and you can only see where it interacts with stuff on the ground.

I don’t think you see the shock wave interacting with the ground. I think you see the shock wave moving through the ground, with the shockwave in the air lagging far behind. Maybe that’s what you were saying. Maybe I’m wrong. I remember seeing a film of an explosion at the plant where they make the solid rocket propellent for the space shuttle. It was huge and there were clearly two shock waves. One in the ground kicking up dirt and breaking grounded things as it went and one in the air traveling slower, behind it.

Explosions in space need not be spherical. 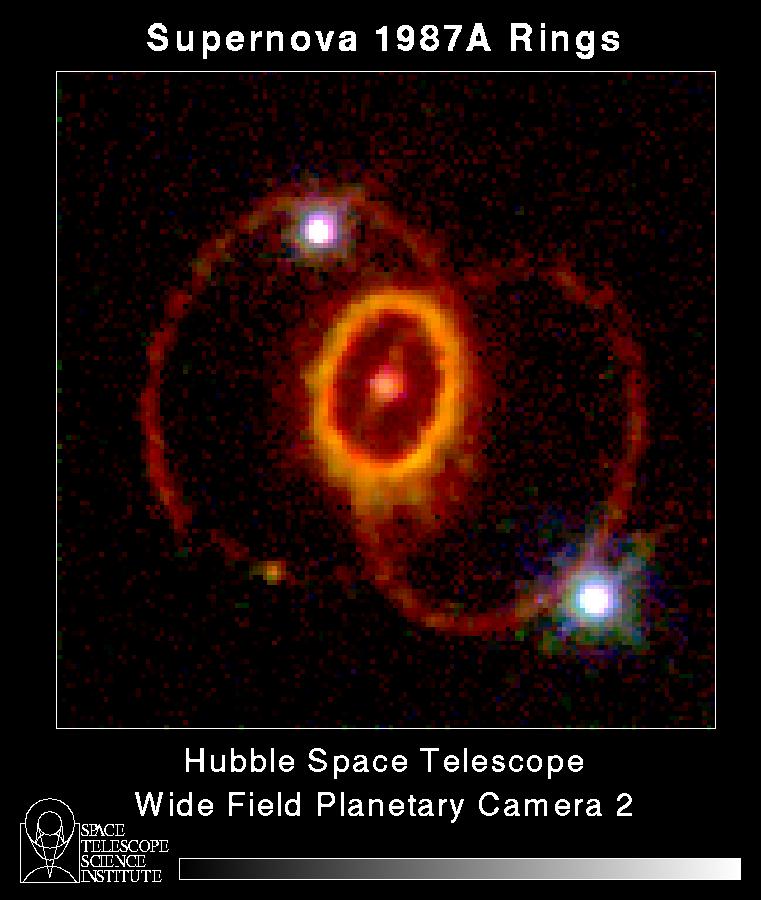 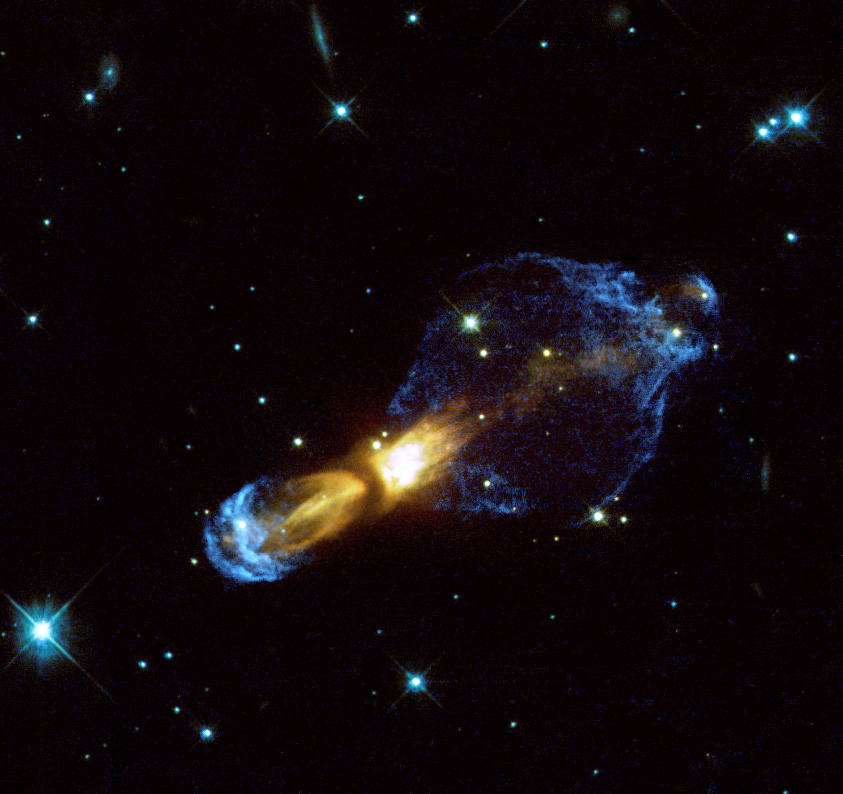 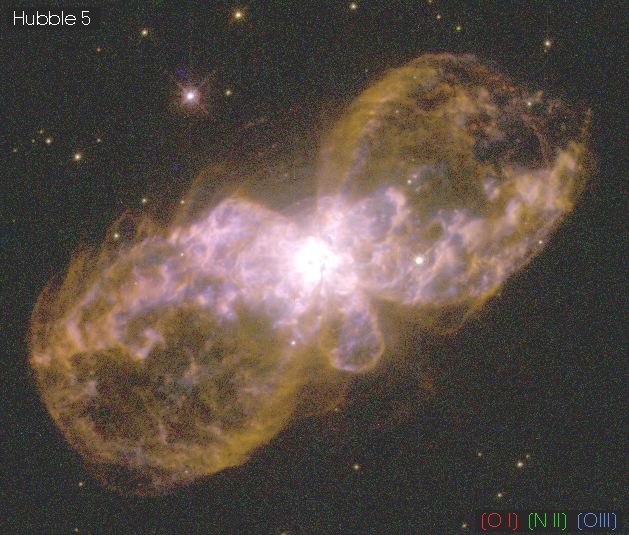 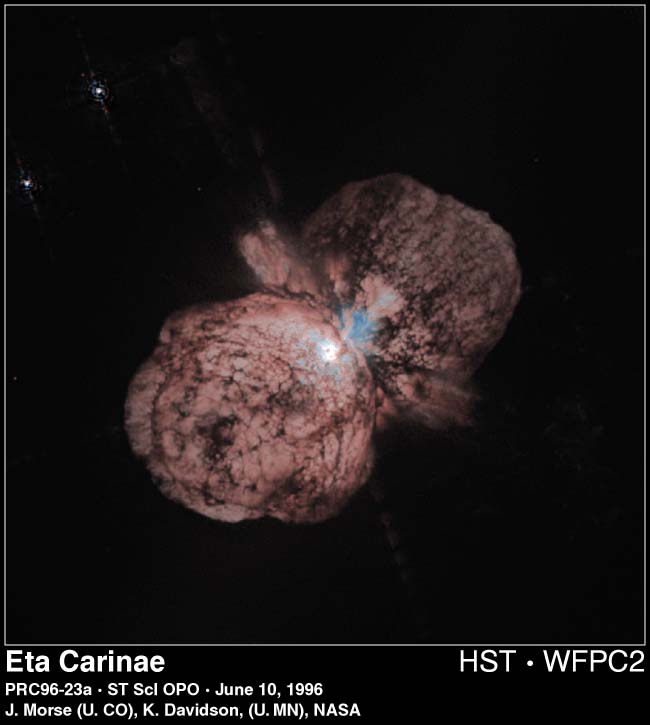 Check out the trailer for the documentary, Nukes in Space; these nuclear explosions detonated above the atmosphere in 1958 are quite spherical, and actually do resemble the annular explosions in sci-fi movies, producing an incandescant shockwave that looks a lot like the Ring Nebula.