Saw a (gridiron) football game today on TV. The temperature was ten below (Celsius) and the field covered with ice. Rushers and special teams had real problems keeping their balance.

Is there any good way to mitigate this? I’m sure there are limits to the size of cleats or spikes permitted. I’m guessing crampons are not an option. And that no one is about to sand and salt their meticulously maintained turf. But can anything be done?

There are stadiums in cold-weather cities (such as Lambeau Field in Green Bay) that have heating systems under the turf, which might help to keep the playing surface from becoming completely frozen, but if there’s actual precipitation that’s contributing to the icy conditions, there may not be a lot that can be done.

I’m not sure if there are limits in particular league rules to the length of cleats, but super-long cleats probably aren’t practical (and players tend to choose long cleats for a different sort of field condition than that – they’re best suited for a wet or muddy field). I suspect that something sharp (like a crampon) would not be allowed.

If the playing surface is effectively (if not literally) a frozen sheet of ice, players may switch away from cleats entirely, and instead go to shoes with soles that are more like basketball shoes; back when artificial field surfaces, like the original AstroTurf, were essentially low-pile carpets, that’s the sort of shoe that many players wore.

And, I know that the field management people for stadiums in cold-weather cities expect that their grass will be trashed by the end of the season – Lambeau (which I know well because I grew up in Green Bay) replaces the grass surface every offseason.

Most of the time the freezing conditions are a novelty that makes the game memorable and interesting. There are some great stories from those games. I’m not sure it’s that much of a problem since generally player health hasn’t been a problem and they’re still able to finish games.

Montreal hosted the Grey Cup (Canadian Football League championship) on November 27, 1977. A combination of cold, rain and snow (and a transit strike) still drew over 68,000 fans. This became known as the Ice Bowl.

A combination of cold, rain and snow (and a transit strike) still drew over 68,000 fans. This became known as the Ice Bowl.

The NFL’s “Ice Bowl” was the 1967 NFL Championship Game, played on New Year’s Eve in Green Bay. The air temperature at game time was -15F (-26C), and the wind chill, using the modern method for calculating it, was -36F.

The Packers had a heating system for the field (a grid of electrical coils under the surface), which had been turned on, while the field had been covered by a tarp overnight. But, due to the warmth generated by the heating coils, moisture had accumulated on the field, and when the tarp was removed, the moisture froze, leaving the field icy (and conditions got even worse as the game went on, and the temperature fell).

Even with the weather and field conditions, it wound up being one of the league’s classic games, with the Packers winning the game on a quarterback sneak touchdown in the waning minutes.

How was it for the spectators in that kind of weather?

Terrible. My uncle was at the game, and he (like many of the fans) suffered frostbite; years later, he told me that it was the coldest he’d ever been. It likely didn’t help that, at that time, Lambeau was an open bowl, with very little to block the wind (and the stands in the end zones weren’t full height), and that modern cold-weather clothing materials weren’t a thing.

Despite the weather, photographs of the game show that the stands were full (or nearly so). 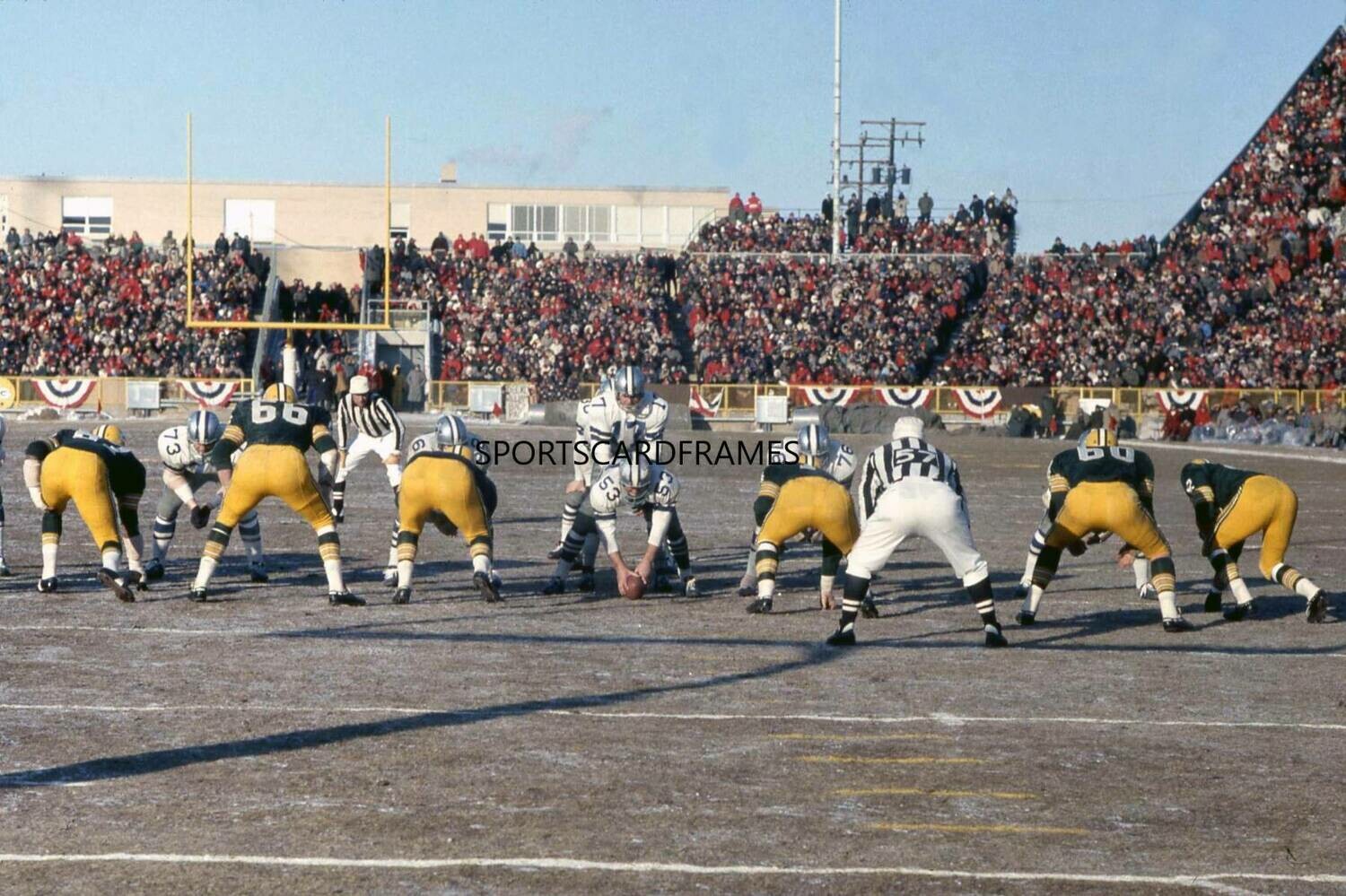 Canadians dress for the cold. Still, those are impressively cold temperatures, since spectators do not move around much. You could not really have anything exposed.

Still, I’ve seen a lot worse. And I have nothing on my sister who worked for months in the Northwest Territories. I would have thought that in Wisconsin they know how to dress for nasty weather? Modern materials reduce bulk but there are lots of traditional alternatives.

Still, sitting in the stands for the length of a game is different from moving about in that weather.

I would have thought that in Wisconsin they know how to dress for nasty weather?

Most do (and likely did back then, too), but when you’re out in the cold wind for 3+ hours, with no cover, not moving around much, and sitting on metal bleachers (which is what the seats were at Lambeau then, and largely still are today), even good clothing can only do so much.

I’ve been at a number of cold-weather games at Lambeau, and the “good news” is that you’re pretty well packed in there, especially if everyone is bulkier, due to wearing multiple layers. The best strategy, back in the day, was to bring in a sleeping bag with you, and to actually get into the sleeping bag – it kept your legs and torso warmer, and gave you another layer between the soles of your feet and the concrete floor of the stands. But, after 9/11, they restricted what could be brought in, and sleeping bags could no longer be brought along.

(Also, parenthetically, for a lot of Packer fans, the warmest clothes that they have are their deer hunting gear; as a result, if you go to a late-season game at Lambeau, you might think that the Packers’ colors are green, gold, and blaze orange.

It’s my understanding that a lot of people bring in pieces of Styrofoam to put their feet on for just this reason.

It’s my understanding that a lot of people bring in pieces of Styrofoam to put their feet on for just this reason.

Yup – styrofoam, or at least a sheet of corrugated cardboard.

Also, back to the OP’s topic: another classic game on bad field conditions was the 1934 NFL Championship Game, played at the Polo Grounds in New York, and commonly referred to as “The Sneakers Game.” Freezing rain had fallen the night before, leaving the playing field icy, and both teams struggled to find footing.

During the early portion of the game, after a Giants player remarked that basketball shoes might give better footing, the Giants sent an equipment person for the Giants to a nearby college, where he borrowed numerous pairs of basketball shoes from the lockers of the school’s basketball team. The Giants switched to the basketball shoes for the third quarter, and outscored the Bears 27-3 in the second half to win the game.

I have a hazy memory of back when all the CFL fields except Edmonton (and maybe Vancouver’s Empire stadium) were artificial turf the announcers would state that the conditions were ripe for broom ball shoes. Haven’t heard that for ages, but I also don’t watch much or any football these days.

The Montreal game mentioned above is the famous “Staples Game” when a player for Montreal shot staples into his cleats to beat the icy conditions. The rest of the team followed and Montreal beat Edmonton handily 41-6

The 1977 Grey Cup game in Montreal was hit with a double whammy. A transit strike that shut down the city’s subway and buses and a massive blizzard made travel by taxis and personal vehicles all but impossible.

I have a hazy memory of back when all the CFL fields except Edmonton (and maybe Vancouver’s Empire stadium) were artificial turf the announcers would state that the conditions were ripe for broom ball shoes. Haven’t heard that for ages, but I also don’t watch much or any football these days.

Artificial turf is a lot different now – it’s no longer the low-pile carpeting, like the original AstroTurf, that they used in the '60s through the '80s (and which would become a skating rink when the weather became icy). The modern, “third generation” turf actually has blades of “grass,” with an infill of sand and/or crushed rubber.