I don’t want to turn this into a political thing, instead I would like to talk about negotiation logic. I think the media and the people ourselves make serious negotiations difficult for one reason the negotiator has a responsibility to win support from his constituents but in reality at the highest levels we are still dealing with personalities. Dealing with someone like Putin would be extremely challenging. Anything we might do to soften him a little ( not sure this is possible) could make negotiations easier. If we just show how tough and strong we are we are challenging them in front of their own people. This seems to be more of an American thing although I don’t know much about other countries. I guess my debate would be I feel we are sending in negotiators with one arm tied behind their back, I feel they need to be trusted more in this area.

Where does Trump figure in here?

In this particular case it had more to do with relations than it did negotiations. I am not and have never been a fan of Trumps bit I did not see anything wrong in the relationship he was working on. I think Trump had a pretty good handle on the type of person he was dealing with and when he approached it in the manner he felt would be most effective he got beat up by the press. I have seen this many times over the years with other presidents as well. I feel their is too much pressure for them to show off what they did instead of allowing for quiet less transparent talks between the leaders.

I don’t believe you have Trump’s intentions, method or abilities right.
This cartoonist comes closer: 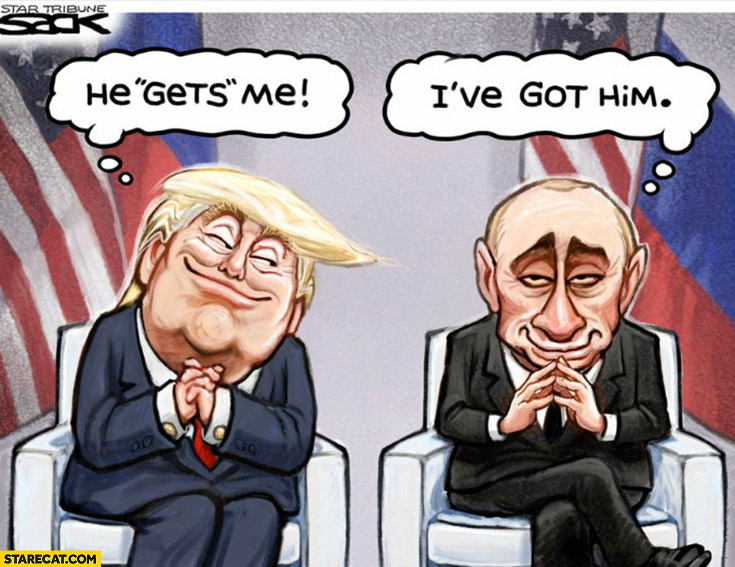 Trump he gets me, Putin I’ve got him

Trump looks at Putin like Pence looked at Trump. Both crazy lookers were being played.

Trump got flack from the media for his handling of Putin because he ignored the fact that Putin was a homicidal dictator, so long as Putin said nice things about him, and provided political assistance. This wasn’t a negotiation strategy on Trump’s part, it was naive susceptibility to flattery.

Putin doesn’t care a bit about how he looks to his people, since he controls the media and can arrest or shoot anyone making trouble. He might care about the impact the war has on the oligarchs, and the military. If enough of the military got convinced Putin is the one making them look incompetent there might be some leverage.

Sorry, but I doubt this.
The evidence shows that Trump likes people who praise him, no matter what they are like.

Yes, I don’t think Trump is capable of understanding the kind of person he was dealing with in regards to Putin: someone who wasn’t impressed by or wanted anything from him ( but would happily use him).
I don’t think Trump’s been scared of anyone in his life, and that doesn’t prepare you for dealing with some situations.

The whole point of “negotiations” is to get someone to do something they don’t already want to do.

So if Trump’s ass-kissing plan was so successful, what exactly did he get Putin to do that Putin wasn’t already inclined to do? So far as I can see, Putin did exactly what he wanted to do, no more and no less. He spent years strengthening his hold on Crimea, while undermining the Ukrainian government in the Donbas region, all in preparation for the eventual invasion of Ukraine. Nothing Trump did or said appeared to have any effect on these plans.

That argument would make more sense of Trump were actually in any way effective with Putin. Remember, the first time Russia shot on Ukraine was under Trump’s watch. And remember how many other things Trump let Putin get away with.

And then look at his response to the war in Ukraine. Was he saying something to try and get Putin to stop? Hell no. He praised Putin for it, and tried to rally the Republicans around Russia.

Yeah, there is some value in praising a narcissist like Putin. But you have to actually use it to try and stop them, not use it as a way to enable their worst impulses.

These economic sanction are much more likely to be effective, keeping Putin from having money to stage any more wars like this. The downside is the collateral damage to everyday Russians and the rest of the world.

Putin thought he could just come in and use Russia’s might to bend NATO to his will. He was very much mistaken.

Remember, the first time Russia shot on Ukraine was under Trump’s watch.

2014 was Trump’s watch? I hate Trump deeply, but please keep your facts straight.

Remember, the first time Russia shot on Ukraine was under Trump’s watch.⁢

2014 was Trump’s watch? I hate Trump deeply, but please keep your facts straight.⁢

No, 2014 is not when the first shots were fired from the official Russian Army on Ukrainian soil. That was in 2018. In 2014, local militias were used and then there was a fig leaf election that said that Crimea wanted to join Russia. I linked the video where this was shown, and I assumed everyone interested in learning about the subject watched it. My bad, I guess.

I don’t appreciate you assumption that I was speaking out of ignorance rather than perhaps not being clear. If you think something I’m saying sounds too stupid, please ask what I mean, or even go look it up yourself. Sarcasm, when not used for a joke, is meant to irritate, not further conversation.

What video are you even talking about? No video is linked here. Never assume anyone is going to watch a video even if you did link it.

How you don’t count the 2014 Russian invasion and annexation of Crimea in 2014 is pretty twisted logic. You know, it is like you’re not counting the Russian Special Forces that seized government buildings in Crimea.

As long as we’re in lecture mode, your last paragraph is way out of proportion to my 2 sentences.

Anyway, clearly the UN should have done more in 2014. It would appear to have encouraged Putin he could get away with taking by force parts of the Ukraine. That was before Trump. I am extremely thankful this time NATO with Biden near the forefront is trying to stop Putin and doing almost as much as possible for a non-NATO country.

Perhaps Trump’s worst legacy is that some people continue to believe that he did competent, positive things during his presidency, instead of failing disastrously at everything, especially personal and foreign relations.

Yes it seems right wing channels want to rewrite history and claim that trump was tough on Putin. Even though he publically sided with putin many times and refused to condemn him for anything, even going against what his own intelligence agencies were saying.
And took months of foot-dragging to sign sanctions passed through bipartisan consensus.

Really, if people want to claim “none of this would have happened under trump” the better framing would be to argue that Biden should have sucked up to putin. That’s debatable (indeed, almost certainly wrong) but at least consistent with facts.

But the notion of sucking up goes against American culture so few trump supporters would concede that that’s what trump did.

The Orange one calls Putin ‘genius’ and ‘savvy’ for Ukraine invasion and keeps on going:

Feb. 22 : Trump described Putin’s aggression toward Ukraine as “genius” and “very savvy,” adding, in reference to the Russian military, “They’re gonna keep peace all right.” Trump went on to praise Putin as “a tough cookie” who has “great charm.”

Feb. 26 : Trump appeared at the Conservative Political Action Conference (CPAC), reiterated his belief that Putin is “smart,” and denounced his own country’s leaders as “so dumb.”

March 10 : Fox News’ Sean Hannity all but begged the former president to criticize Putin, but he wouldn’t. “I got along with Putin,” Trump said.

March 26 : At a political rally, Trump told a supportive crowd that Putin is “smart,” and his aggression toward Ukraine “looked like a great negotiation.”

April 1 : Trump pointed to the duration of Putin’s dictatorship as proof that the Russian is “obviously” intelligent.

Clearly the Orange one has a deep understanding of Putin and geopolitics and there is nothing wrong with the relationship he has with Putin.

And took months of foot-dragging to sign sanctions passed through bipartisan consensus.

And let’s not forget the little matter of delaying military aid to Ukraine in an attempt to extort them into helping him fix the election.

I think I used a bad example when I chose Putin and Trump. The real issue I am trying to approach is how important is it for potential adversaries to build relationships before they get into the hard work of addressing their differences? Does too much transparency hinder the ability of leaders to build these relationships. Are we putting too much pressure on elected officials to react in certain ways even though it might be contrary to building a relationship that might lead to better long term outcomes.