Question about level of discovery possible with online DNA tests

A question containing the following paragraph appeared in WaPo’s “Ask Amy” column a few days ago (the discussion was about alarming and unwanted revelations that are sometimes fallout from online DNA tests):

After 50 years of genealogy research, I did a DNA test and found out that neither of my male grandparents were my biological grandfathers.

My assertion (agree or disagree): I do not believe it is possible to find out what the writer claims solely from an online DNA test.

I’ve done 23andme, and the report you get presents you with a list of people (strictly cousins of various degrees, in my case) you are likely related to IF they have consented to share their test results, and of course, if they have also done the spit-in-a-tube thing with 23andm3.

Now if a person you always assumed was your first cousin, for instance, took the same test from the same company, and it turns out you don’t share any DNA, your report won’t explicitly say that-- they simply will not show up in your list of potential relatives. So when you and Mary Lou get on the phone and each of you finds out neither of you showed up as first cousins in your 23andme reports, okay, you’ve found out that you don’t share DNA and you’re not cousins. The parents you’ve always assumed were siblings aren’t. I can see how a 23andme report would reveal that. And yeah, that would be interesting at best and devastating at worst.

But I can’t envision any way that an online DNA test report would show me that “neither of my male grandparents were my biological grandfathers.”

Even if several people in my parents’ generation took the spit-in-a-tube test and found out some or all of them weren’t related… how would this reveal anything about MY grandfather, let alone BOTH my grandfathers? But anyway that didn’t happen. The letter writer said "I took a DNA test."

I know doing online DNA testing can reveal family secrets regarding parentage, but this claim about the grandfathers doesn’t make sense.

I think people think that the online DNA testing is like what you see in cop shows, where some unknown DNA is found on a soda can and then compared with a vast national or international database and through the clever interpretation of mitochondrial DNA, family trees readily pop into view. The spit-in-a-tube results aren’t that dramatic or comprehensive. They compare your DNA with others who’ve also sent their spit in to the same company AND given permission both for the comparison and for the sharing of results.

NOTE: I’m not saying it’s impossible to use DNA to find out that both your grandfathers are not related to you, just that it’s not possible with basic online DNA spit-in-a-tube testing. Maybe the “other genealogy research” referred to was where the revelation came from. But I maintain it wasn’t from the online DNA test.

Am I all wet here or is Amy’s letter writer?

You’re right about the science of it, but not the semantics. I think you can say you made the discovery through a DNA test even if it had to be confirmed through other means like birth records. You never would have gotten to the end conclusion without the initial discovery inferred from mystery cousins and absent cousins who took the test…

You are probably right. I took the writer’s statement literally.

It’s what I do: read what’s right in front of me. Years as an editor and grant writer have made me very literal-minded and disinclined to extrapolate.

I just watched the documentary Baby God about a fertility doctor who impregnated hundreds of patients with his own sperm instead of their husbands’. The offspring all had interesting stories about how they initially discovered there was something fishy in their online DNA results and only found out the truth when they started comparing notes with the mystery siblings.

I’m trying to sort what you mean by emphasizing “online.” A DNA test is a DNA test, generally involving some spit or a cheek swab or something. How does an “online” DNA test differ from one that isn’t “online”?

I would assume the details were cut for length (either by the letter writer or by Amy’s editors) and that the test either showed matches or didn’t show matches that led to further revelations.

I’m trying to sort what you mean by emphasizing “online.” A DNA test is a DNA test, generally involving some spit or a cheek swab or something. How does an “online” DNA test differ from one that isn’t “online”?

An online test comes with a crowdsourced database that lets you identify relatives. You don’t get that otherwise unless you are in law enforcement (and even cops often rely on the online services to find people related to their unidentified suspect.)

Ah, okay - that makes sense, I should have realized that’s what the OP meant. Thanks.

Ah, okay - that makes sense, I should have realized that’s what the OP meant. Thanks.

I named 23andme several times. I guess that wasn’t clear enough. I meant a DNA test offered by an online organization (like 23andme) where you don’t go to see anyone in person, but you spit in a tube, mail it in, and get your results in an ONLINE report.

I also contrasted this with the kind of DNA testing you see in cop shows where some perp licks a soda can and then the “lab” compares the DNA with a national/international database of stored DNA results with names.

I endeavored to be as clear as possible, and yet I fell woefully short. I’m constantly learning to hone my communication skills.

I don’t know how a “standard commercial DNA test” works. I’ve only experienced the ONLINE test put out by 23andme. Ancestry.com also does one. Maybe at an in-person lab you get more detailed results. The result hypothesized by @amarinth is not how 23andme shows you the results of your DNA test. People who are not related to you do not show up in your report. And your 23andme report gives no indication of the other people’s ages

Here is what the 23andme report looks like. According to 23andme, I have 1,503 “DNA relatives” so far. The report is 61 pages long. I’ve blurred the name column. Other people are added from time to time as more people join the site, and I’ll get an email saying “You have new DNA relatives.” Here is the first page. 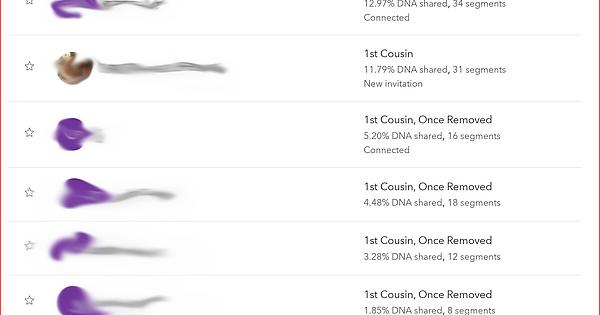 Here is the last page. I don’t know who any of these people are, and seeing their names tells me nothing about grandparents. 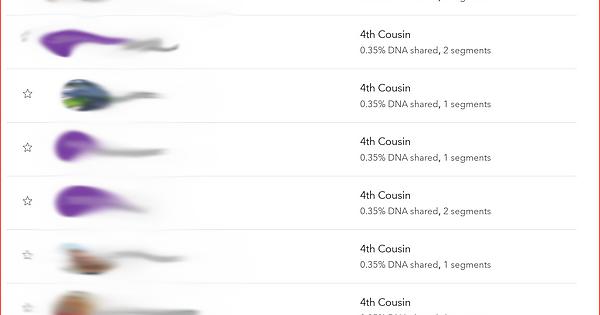 But laypeople, who take these tests, often have no idea what’s required to prove a hypothesis with DNA-matches, and DNA-genealogy forums are full of questions that show that a little knowledge can be a dangerous thing. Some people ask about evidence they think show infidelity in a cousin’s family based on complete misunderstanding of the science. The question asker could be one of those, although determining a grandparent is not the right one only requires you knowing some second cousins on that side have also tested and you not matching any of them. The people who collect such data have yet to find a second cousin pair not matching that could be shown through other DNA evidence were biological second cousins.

23andme is also the one I’m most familiar with and that’s where I drew my example. Everything I mentioned can be found in 23andme and from my understanding it can also be found on ancestry. So I think I wasn’t clear enough.

A person who has done 50 years of genealogical research usually knows a lot about their family tree. When their 23andMe results don’t show matches to cousins they know have tested, and also show close cousin matches who have no documented familial links, it’s clear there’s a discrepancy between the paper trail and the biological reality.

There is also the possibility that the genealogist is not a good genealogist, and their documented tree is based on bad research - so the biological matches don’t support it - or that the genealogist has drawn some incorrect conclusions about their DNA results through misinterpretation of the data, or they have been misled by the bad data shared by others.

Just in case you’re looking for an answer to the question “Could a 23andMe or similar test reveal that neither of your grandfathers is your biological grandfather?”, the answer is yes, easily.

The most common one I see in the genealogy groups is that grandad was a first gen immigrant from a specific, non-mobile population in x locality and so I should be a quarter (insert ethnicity), but instead I’m showing up as 0% that ethnicity and around 1/4 (something else entirely). That’s not a slam dunk for some ethnicities (eg Scottish/English), but can be significant at times (eg Irish/Jewish). I don’t trust ethnicity enough to rely on this, but acknowledge it could be a clue.

The most reliable indicators are:

Somebody with 50 years genealogical research behind them should be able to quickly spot the absence of connections they know they should see in their results, and the presence of people they shouldn’t see. They may have channels of communication to more distant cousins than your typical non-genealogist so they can actually reach out to find out if second cousin Marybeth or anyone in her branch has done 23andMe, and identify the absence of a match to a close cousin that way.

Thanks for your well-reasoned and carefully thought-out answers. Very informative.

Another possibility, based on a true story.

I was a little concerned when a young friend of mine decided to take a 23andMe test. His mother was American, with English/German Northern European ancestors and his father was Pakistani. His father also harbored some suspicion that he was not actually the father of my friend, partly because of my friend’s coloring, he had dark blonde hair.

If his test had come back looking like mine - 99.9% Northern European- that would’ve pretty much proved that his mother’s husband at the time he was conceived was not his biological father, just because the expected ethnicity wasn’t there at all.

If the grandfathers were of a distinct race or ethnicity and that race or ethnicity didn’t show up in the DNA profile at all (or less than .005 percent or thereabouts), one could reasonably conclude that if the profile was accurate, the grandfathers were not biological relatives. That conclusion could be made even with the absence of DNA analysis of any other known relatives, without using 23andMe’s relative feature and with minimal knowledge of the family genealogy. I would think that “Gramps was born in India to Indian parents and lived his entire life in India yet there is no evidence of any Indian genes in my profile” would be reasonable cause for doubting the relationship.

BTW, my young friend’s DNA profile was, to my relief, consistent with his mixed American/Pakistani parentage,