Questions about those power boats with all the engines

You all probably see those videos appearing on your FB feed. Powerboats with five or six 450 h.p. engines on the back.

Is that actually the HP for those motors? A total of 3000 h.p. seems unlikely for any conveyance, let alone for a boat.
How fast do these things go?
How do they keep the bow down when they accelerate? Seems like the boat would flip over from all that thrust.

Those boats are typically called cigarette boats or Go-Fast boats.

A Cigar boat is a small, fast boat designed with a long narrow platform and a planing hull to enable it to reach high speeds. During the era of Prohibition in the United States, these boats joined the ranks of "rum-runners" transferring illegal liquor from larger vessels waiting outside US territorial waters to the mainland. The high speed of such craft enabled them to avoid interception by the Coast Guard. The present conception of such boats, dating from the 1960s, owes much of their design to...

They can go wicked fast. They are wicked dangerous to themselves and others when in inexperienced hands. The fastest ones can go 100+ MPH.

You will notice that those go-fast boats hydroplane on top of the water; that alleviates those potential problems. The weight distribution and fluid dynamics are an important part of the design: 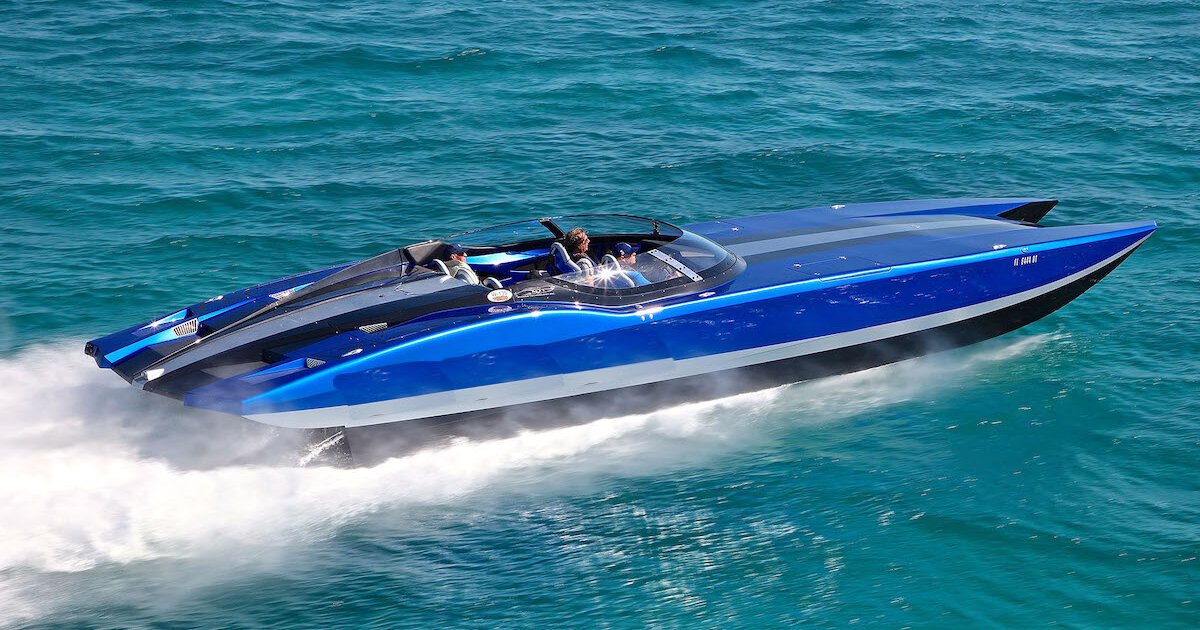 Go-Fast Boats: Beginner's Guide to the World of Speed

The world of go-fast boats is one like no other. High-performance boats are extremely fast and extremely enticing—and once the aquatic speed bug bites, you’ll never be same. Learn more about different go-fast boat types, costs, and how to get...

That link mentions that a “sport” catamaran with twin engines goes up to 130 MPH, a go-fast catamaran 180 MPH, a high-performance center console from 60 to 85 MPH, a V-bottom sportboat at 150 MPH, etc. Though the world record for a jet speedboat is comfortably above 300 MPH.

Those boats are typically called cigarette boats or Go-Fast boats.

I remember cigarette boats from way back. They were typically inboards or inboard/outboard powered.

Seems like hitting anything (however small) at those speeds would spell disaster.

And, as noted, in inexperienced hands, they misjudge a wave and break and sink.

I assume that happened to this boat from lake mead:

I remember when Princess Caroline’s husband, Stefano Casirighi, was killed during a boat race. This was the boat:

There were three to four-foot wave conditions on the race course, which caused Casiraghi’s 42-foot catamaran, Pinot di Pinot , to flip.[6] Traveling at ca. 150 km/h,[6] it did not have a full canopy, and experts who studied the accident have said that Casiraghi would most likely have survived the accident had the boat been equipped with one. As a result of his death, safety laws became more stringent; a safety harness and closed hull became compulsory, as was a twin hull design for boats. Races now take place close to the harbor where waves are gentler, which is policed off for safety reasons as boats are no longer allowed to drive near the course.

A friend has a beautiful boat that goes very fast. He bought the boat years ago and lovingly restored/rebuilt everything. We don’t have access to an ocean in western Pennsylvania, but he likes to run it up and down our section of the Allegheny River once a year.

In order to do this, he fills up his gas tank with ethanol-free gasoline ($$$$). He then has his support crew stationed in boats along the section of river he will run communicate with him about each section. I’ve done this in my pontoon boat.

Once he has been assured the river is “safe”, he starts up the boat and goes zoom. Then he turns around, communicates with the support crew and goes zoom back to where he started.

The boat is wicked fast. Running it all out is a huge risk. All it takes is one semi-submerged log and he could be injured or killed, but he likes it.

“Get your dirty paws off my boat, you damned dirty ape!”

In my opinion, many of the multi-engine outboard boats you see are exercises in ego. You have three 450s? I’m getting four! Yeah?! I’ve got five! There is a diminishing return. Each engine you add contributes a smaller percentage of total horsepower and top speed while adding more weight and drag. Another $50,000 engine might gain you a few MPH. To some, that matters. Is there a real need to be able to go 80+ MPH on you center console fishing boat? I was in Key West recently and most of the 5/6 engine boats aren’t even set up for fishing. Going as fast as possible with the loudest music possible blasting seems to be the main goal. They are eye-catching, though. Which I suspect is really the main goal. In the mid-Atlantic region where I live, the sea state often determines how fast you can go. Unless you don’t mind having your fillings come loose.

he fills up his gas tank with ethanol-free gasoline ($$$$)

When I was little, dad said he’s always wanted a PT boat. (Nearly all of them had been destroyed after WWII, so it was an impossible dream.) To be honest, I’d love to have a PT boat. But…

This is more what I was looking for. Some of the boats above are racing craft with inboard jets on boats designed to take the stress. I’m primarily interested in the multiple outboard boats.

I noticed that right away. Wonder if it was a conscious choice by the photographer, or just a coincidence.

PS It must have been a long walk from Lake Powell to New York City.

If you really want the speed without the noise and the pollution, you can try one of these: 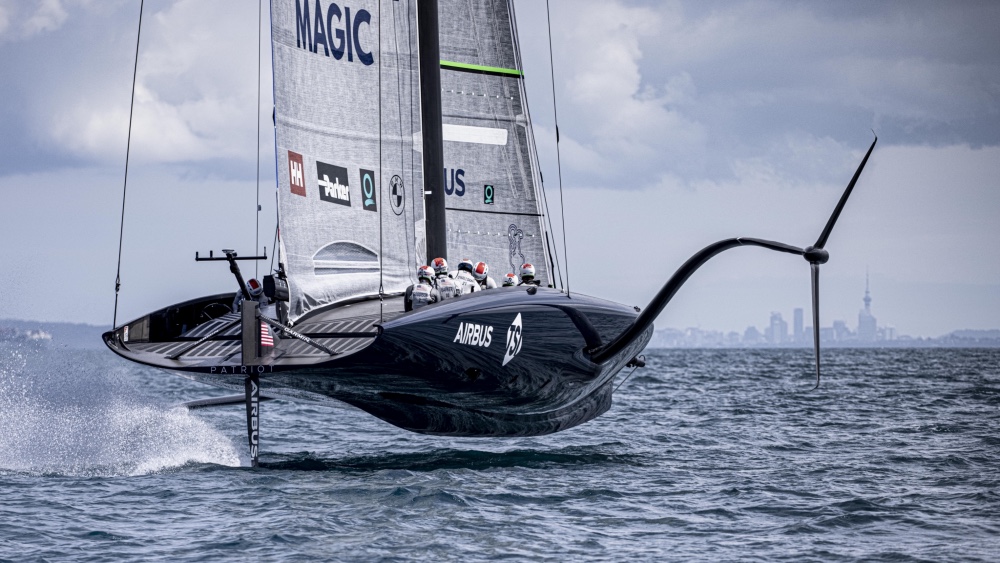 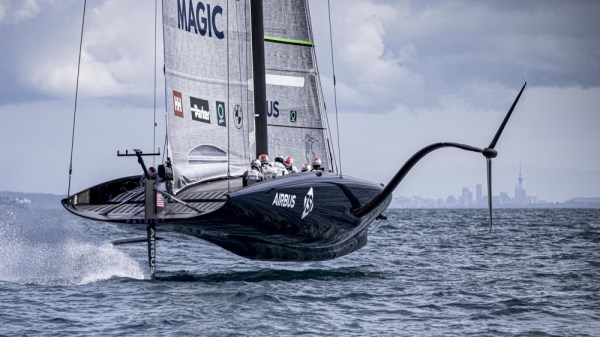 Boat of the Week: Meet the ‘Patriot,’ the New Lightning-Fast America’s Cup...

After being airlifted 9,000 miles from the factory, the 45-foot sailing racer exceeded designers’ initial expectations by zigzagging around the Auckland waterfront at insane speeds.

Somebody mentioned “fishing” upthread. Hah! Those boats are not for fishing; they’re for partying & zooming.

The speed for the fastest boat on record was set in 1978 for a 3000HP turbojet engine powered hydroplane named The Spirit of Australia at 317 MPH by Australian Ken Warby. Just one engine, but it was a really big one. Attempts to break that record have proven dangerous. Warby’s sons have taken over the effort to eventually break his record.

The boat is wicked fast. Running it all out is a huge risk. All it takes is one semi-submerged log and he could be injured or killed, but he likes it.

Reminds me of one vacation down in Florida, gulf side. One of my uncles buddies had a cigarette boat, and to a 14 year old me taken out on a glass smooth gulf, and going hella fast was freaking amazing. Would I own such a boat [if money were no object] nope. I might consider renting one every now and again but to be perfectly honest, back in the day when I had freshly rebuilt the engine on my mustang, my boyfriend and I had the opportunity to do an occasional half day bombing around Watkins Glen, and I really much prefer fast cars to boats. On that note, I was taken up in a CH53G over a military reservation in Germany and we were ‘contouring’ - flying nap of the earth and that was pure adrenaline junkie fix time =) That I would do all the time if it were possible =)

Is that actually the HP for those motors? A total of 3000 h.p. seems unlikely for any conveyance, let alone for a boat.

Not sure what to make of this sentence. If your benchmark for comparison is the family sedan, that’s vehicle with a lot of constraints: then engine has to be quiet, run clean, fit under the hood, and last for well over 100,000 miles. Once you relax those constraints, you can tap into a lot of power. To cite an extreme example, top-fuel dragsters produce over 10,000 horsepower, but they’re extremely loud and dirty, and they get rebuilt every few minutes.

3000 horsepower on a boat is a lot, but definitely doable, if you’ve got the money. But if you (as an operator) want to put all that power to use, you better know what you’re doing.

That I would do all the time if it were possible =)

To cite an extreme example, top-fuel dragsters produce over 10,000 horsepower, but they’re extremely loud and dirty, and they get rebuilt every few minutes.

It’s only a few seconds when running. Other than idling to the line, the engine doesn’t even turn 1000 times.

With a redline that can be as high as 9500 rpm, Top Fuel engines turn approximately 540 revolutions from light to light. Including the burnout, the engine needs to survive only 900 revolutions under load.

From the Top Fuel copy Pasta:

What actually happens when you light off your Top Fuel dragster