The article is about the polio vaccine , FDR suffered from polio. 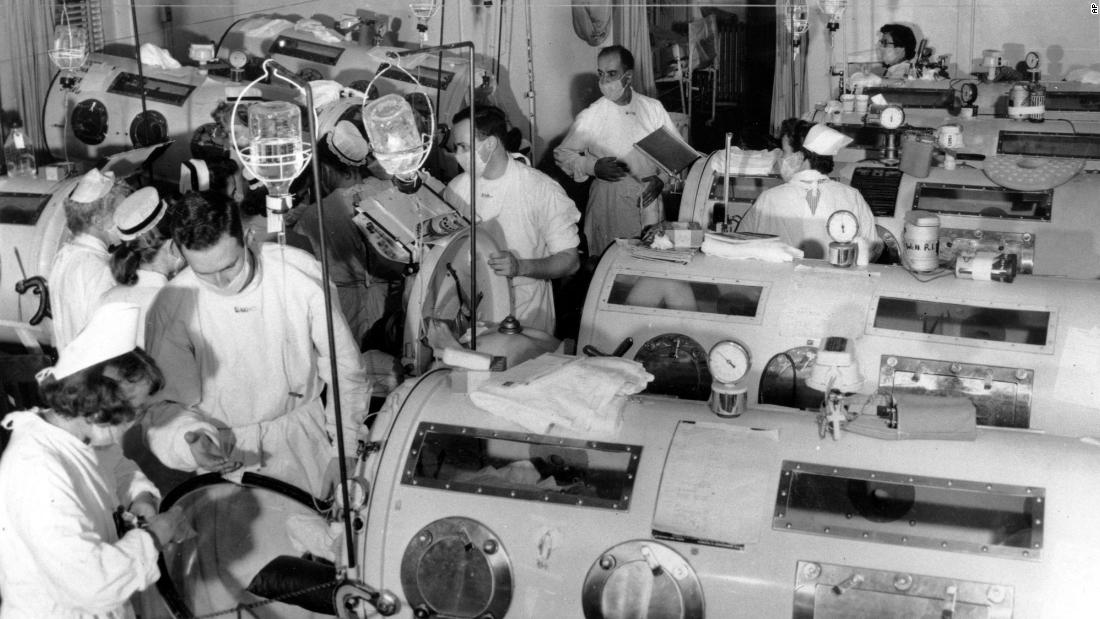 The other time America desperately sought a miracle cure for a devastating...

Back when he was a boy in the 50's, writes Charles McNair, there was a similarly terrifying disease afoot in the US: polio. It came "with a thunderclap of fear," it's other name infantile paralysis, led to lockdowns -- as with coronavirus -- and left...

I’ve already seen footage of FDR walking, and know what a painful and difficult charade it was to hide the fact that he really couldn’t walk in a normal way, but only with immense gear and assistance (mostly by his son). It’s why I adore his efforts for defeating the Nazis even more than if he’d be an able bodied politician.

it is now thought he probably had Guillain–Barré syndrome rather than polio. GBS was not as well known back then as polio.

In 1992, there was a two-part PBS American Experience documentary on FDR. I use the section on the Depression and New Deal in my college history classes. The film shows FDR walking a few times in that section alone, and has a short discussion of Roosevelt’s disability.

He’s shown walking at his inauguration; standing at a reception line; and standing and moving around on the back of a train and on a ship.

I actually think that what’s even more amazing is how the press were willing to completely ignore his disability in their dealings with him, and how few pictures there are of him in a wheelchair. According to the documentary, there are about 40,000 still photos of FDR at his Hyde Park historic home in New York, and only two pictures, both family photos, show him in a wheelchair.

As you can see, he wasn’t really walking. He had braces on his legs and he couldn’t stand unaided. Even the cane was part of the illusion, it was insufficient to hold him up. I don’t think he ever said he could walk, he said he had beat polio, and clearly, polio or GB, he didn’t let it get in his way.

BTW: Do you know who else had polio? “Moscow” Mitch McConnell"

The popular story about JFK was the press did not write about him cheating on his wife even though they knew about it. The Sopranos had an episode where Tony ran into one of his father’s mistresses and she said she had a brief fling with JFK while he was president.

Somewhere I read Nazis knew FDR was in a wheelchair and they mentioned it a few times in propaganda.

We watched a PBS documentary on the Polio Crusade a few days ago. Quite apt for our time.

The key character is Basil O’Connor who was one of FDR’s guys and got stuck with the Polio cause. Basically not exactly a caring human. But an absolute tiger when given a job to do. (He started because it would help FDR’s political career.)

OTOH he kept going even after FDR died. So it wasn’t all cynical politics.

From that page: “Basil O’Connor made a pledge to provide care for every polio patient in America, and to invest in scientific research to create a vaccine that would end the disease forever.” We need an O’Connor 2.0 with complete backing of the President.

BTW: Do you know who else had polio?

My aunt, on crutches. My next-door neighbor girl and the daughter of Dad’s co-worker, confined to iron lungs. It was all around me, as was the March of Dimes, founded by FDR (or his minions), that funded the Salk vaccine. Somehow I can’t see Tramp starting a COVID charity - except to skim donations, like his prior charity work.

The guy has a PhD and was a college professor with two books published. He’s now emeritus, but will still occasionally sit on dissertation committees.

The guy has a PhD and was a college professor with two books published. He’s now emeritus, but will still occasionally sit on dissertation committees.

I had a history professor in the late 70s who was blind. Did he teach history by chance? I cannot remember the guy’s name but he was a good professor of American history.