Raya and the Last Dragon

It wasn’t bad, but I didn’t think that it was Disney “A” game. More like something from Dreamworks or even one of the European CGI studios.

I clicked on it on our Roku TV and they want ~$30 to stream it!
Not gonna happen.

They’re positioning it as an alternative to seeing it in the movie theater, where it’s currently a new release. For a family of four and depending on local ticket prices, 30 bucks is anywhere from pretty reasonable to an outright steal. The snacks will certainly be cheaper. 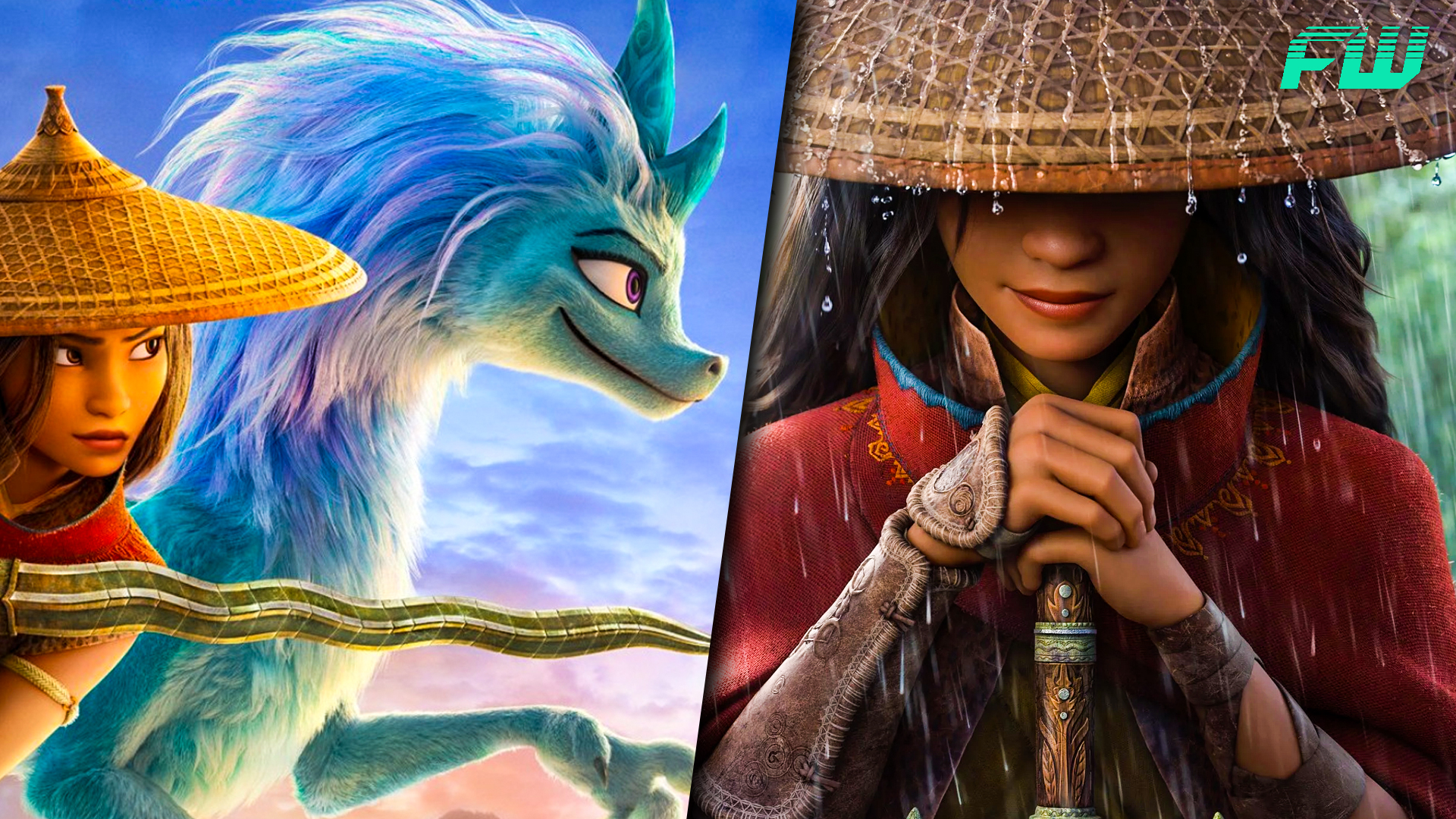 Here's How You Can Watch Raya And The Last Dragon For Half The Price -...

That works if you’re a family of four, but two old cheapskates, not so much.

Amen. Plus for a spectacular movie there’s still nothing like a real theater as opposed to the at-home experience. To help fill the screens while Hollywood revs back up, the local multiplex has been running some of movies past at $5 a ticket. Last week they ran LOTR, all three of them. It brought back memories of seeing them for the first time twenty years ago.

On June 4, the Raya movie will conclude its “virtual wide release” period on Disney+, and after that you can watch it on Disney+ at no extra charge, along with the rest of the regular Disney+ content.

I’m confused at people who are trying to make this the next “Coco” in terms of being “inspirational to Southeast Asians” when Coco was very much focused on Mexican culture, when this seems very generic Asian culture. This article has the quote

In a teaser that almost made me cry (and I’m not a cryer), Raya wields what look like bamboo [Arnis sticks]— weapons used in Filipino martial arts. Her [sword] is reminiscent of the Indonesian kris. The epic combat scenes in the film also draw from [fighting styles] from [Thailand, Malaysia,][Cambodia, Laos, and Vietnam].

I can’t speak for Asian cultures, but I’m Mexican-American and if I was watching Coco and suddenly a bunch of Brazilian cultural references popped up I’d be more confused than inspired.

The movie has one of those (complained about in a different thread recently) travel around gathering artifacts to complete a quest video game plots.

Now that Raya and the Last Dragon is on regular Disney+, I watched it this weekend. I think I liked it more than @Darren_Garrison did, but, yeah, I didn’t think it was a top tier Disney film. I thought it was good, but honestly, kind of forgettable.

I’m confused at people who are trying to make this the next “Coco” in terms of being “inspirational to Southeast Asians” when Coco was very much focused on Mexican culture, when this seems very generic Asian culture. This article has the quote

In a teaser that almost made me cry (and I’m not a cryer), Raya wields what look like bamboo [Arnis sticks]— weapons used in Filipino martial arts. Her [sword] is reminiscent of the Indonesian kris. The epic combat scenes in the film also draw from [fighting styles] from [Thailand, Malaysia,][Cambodia, Laos, and Vietnam].

I can’t speak for Asian cultures, but I’m Mexican-American and if I was watching Coco and suddenly a bunch of Brazilian cultural references popped up I’d be more confused than inspired.

I think the equivalent is more like a film inspired by Latin American culture that didn’t include references to Mexico and Brazil, but instead included distinctive elements of the cultures of Guatemala, Honduras, El Salvador, Belize, Nicaragua, and Belize.

“Asian” culture in the U.S. largely means China and Japan, and limited slices of those. Maybe South Korea as well. But if you’re Vietnamese, likely the only representation of your culture you’re going to see in a U.S. movie or TV show is as bad guys or maybe innocent victims in the Vietnam war. What you’re not going to see is a Vietnamese hero. And other Southeast Asian cultures are even less represented. Raya and the Last Dragon took inspiration from several cultures that rarely if ever get any representation at all in U.S. entertainment - or even a lot of Asian entertainment, for that matter. And not just cultural elements, but the heroes of the story.

Also just saw it. It was fine. Embarrassed that I didn’t pick up on the collecting not only a stone fragment from each region but a person with mutual trust developed each time until very late in the game.

Coco was a celebration of Mexican culture and mythology. This was a fantasy land with apolitical shout outs to real world Asian cultures with international marketing considerations in mind.

And even there I think they ran a risk that Chinese governmental powers would interpret Disney implying that they are Fang on their side of the water. Of course it could also get spun as trust for unification as well. Hard to stay apolitical.

I also saw it on Disney+ and here was the review I posted to Letterboxd.

Gist: Not in the top tier of animated movies, but very charming and worth your time

This movie was absolutely gorgeous, a truly great achievement in animation. I just wish that it had a script that could live up to the amazing artistic work shown in its making, but alas, it is only and OK story. It isn’t bad, but the emotional beats of the story just do not resonate as deeply as the movie hopes for. A nice story, but not one that will make an impact on me that lasts.

However, in its final 30 minutes, the story starts to come together and I left the movie feeling more moved than I expected up until that point.

Pros - Again, a very beautiful and amazingly well animated movie. - Sisu is a great character and very well voiced - James Newton Howard wrote some great music - The final 30 minutes were so great, they elevated the movie quite a bit

Cons - Raya is fairly generic as a character - The opening hour is nice, but not particularly impactful story-wise

I’d recommend this movie to anyone who really likes animated movies. It is not a major misfire by Disney, but it can’t get itself up into the top tier level of animated movies. Worth a watch, but I doubt it will be on many favorite-lists.

I just saw it and am gonna rant here so I don’t harsh my family’s buzz, cuz they all (I think) loved it.

And I can’t think of a third good thing.
-The dad dies early on. The mom, was she even mentioned? If so, barely an afterthought. Super cliche.
-Seriously, a magical artifact broken and scattered that has to be gathered bit by bit in order to save the land? I played Zelda in 198something, don’t need a movie of that plot, come on.
-Tuktuk was fine for cutesy humor relief. Making the dragon also be cutesy humor relief really didn’t work for me. Adding a toddler and monkeys? Cutesy overload, and this was the point I realized this movie wasn’t aimed at me.
-With that hairdo, I kept expecting the Fang leader to ask to speak to the manager. I dunno, maybe that’s a traditional Filipino 'do and I’m being dumb, but it looked like a super specific trendy 2020 style and really took me out of the movie more than anything in any fantasy movie has since the synth chords in Ladyhawke.
-Worst of all, though, was the moral: trust people even when they don’t deserve it. When you make yourself vulnerable to someone and they violently betray your trust? You’re a bad person if you don’t give them a second chance. When they violently betray your trust again and then blame you for what happens? If you don’t give them a third chance, literally the world will end. I hate hate hate that moral.
-Besides which I didn’t like the art direction for the dragons at all. They weren’t majestic or mystical or regal, they were My Little Pony. But that might just get back to the movie not being for me.
-Which brings us back to the moral. Wanna know who I super don’t want getting the moral of “trust people who abuse you”? Young girls.

-Which brings us back to the moral. Wanna know who I super don’t want getting the moral of “trust people who abuse you”? Young girls.

Hmmm, I was excited about this movie up to this point, (I even like the My Little Pony look of the dragon.) Is this message “heavy” or something maybe younger ones might not pick up on too much?

Raya and the Last Dragon took inspiration from several cultures that rarely if ever get any representation at all in U.S. entertainment

Same with Moana. Polynesia is made up of a bunch of tiny countries that have similar, but different, languages and traditions, and stretches across an entire ocean from Hawaii to Samoa to Fiji to Aotearoa/New Zealand and everything in between, but that didn’t mean anyone felt left out or unacknowledged in the story, as Maui is a common mythological figure to all of them. Raya and the Last Dragon is the same for a range of SE Asian cultures; picking out bits and pieces, and crafting an original story that can touch on multiple cultural features.

The message is not to trust an abuser.

It is a bit trite and naive but it is not that, not to my experience of it.

It is that distrust, tribalism, and hyperpatisanship, destroys the world, leads to our stabbing each in the back, that trust is risk, one that can get you hurt and does, but ultimately the risk is better than the alternative.

For kids watching? Living in today’s world, watching adults living in their camps convinced that their fellow citizens are evil demon threats to all they hold dear?

A reasonable Disney moral of the story and counterweight to ugly reality.

The message is not to trust an abuser.

The broader message, as you say, is that tribalism is bad. But the specifics of the story involve someone not trusting a person who got her father killed, and then giving that person a second chance. When she gave that person a second chance, they got her best friend killed. And then the world was only saved because she gave them a third chance, after they blamed her for her best friend’s death.

The way the general message was made was just awful.

Father was not killed. Stonified and able to be recovered. Clearly not what was wanted to happen.

Seriously what gave Heart the right to hold and “protect” the gem from everyone else? What made it theirs?

Fang and the others thinking that being holder of the gem helped Heart, not trusting Heart any more than Heart trusted them? Rational and justified. The movie starts with how they warred over the gem in the aftermath. It skips over how Heart prevailed to hold the gem alone. They didn’t win a vote pretty sure. Heart who just happens to be prosperous while the daughter of Fang’s leader is awed to be eating a bowl of rice.

Raya killed Sisu. The trigger was not actually pulled by Namaari until Raya threw her sword and set it off. Raya realized that was the case when Namaari was on the ground which is why she spared Namaari’s life.

Not saying it was done well. It was not. And again: kid story naive. But no Namaari was not an abuser. She was loyal to her mother and tribe (Fang first!) and had no reason to trust Heart or Raya.

Yeah, not getting into a back-and-forth on this.