I went on a weird research rabbit-trail about a kind of ant that self-destructs if needed, and it led to an article displaying the “flight termination” console used during the Challenger disaster (the Range Safety Officer pushed the real-life self destruct button on the two boosters as they went erratic after the initial explosion–for fear of them hitting a populated area).

searching ‘self destruct’ seems to hinder results in researching what real life things have autodestruct countermeasures. Even the rocket boosters call it “flight termination,” and in rocketry they seem to call it “range safety systems.”

I know that military aircraft are dealt with by explosion when downed in hostile territory and extraction is impossible (either by air strafes, planted devices by “sappers,” scuttling, etc). This is a KIND of self-destruct, even if it’s not a built-in system…I guess…

So what other systems might have self destruct capabilities? It seems drones are reported to both have and not have any systems, but they seem like a likely candidate.

It seems logically impractical to have a full scale sci-fi movie “blow the whole everything into nothing” switch, but as in the boosters, it makes a LOT of sense as a redundancy. I can imagine having something on deep water wells, or hypser-speed aircraft, or whatever, but I am just imagining.

Any examples of auto destruct systems in real life?

I would guess that all Navy vessels carrying nuclear weapons have some scuttling protocol. Perhaps not fully automated, (ala Alien) but still fast.

Plus, every cell in your body. A sunburn is really a mass suicide.

Would you include dye packs for sacks of money? Not particularly destructive, but they do mark the money (and whoever opened the bag…).

Drones are certainly a logical possability. The surveilance equipment is probably classified technology, and if the self-destruct goes off by accident there’s no pilot on board.

I imagine military drones probably have some very limited self-destruction capabilities, most likely on parts that are classified or otherwise sensitive.

For example, it may have charges built into the encryption gear, flight control software system or remote control gear, but it’s unlikely for the airframe or engines or anything else that’s not particularly high tech or hard to come by.

Phones now self-destruct by wiping themselves and marking them as unusable on the network.

I think this probably counts. It’s an art piece, but its sole purpose is to disable itself.
www.youtube.com/watch?v=5fXN7x7a5So

There have been attempts to create computer chips that destroy themselves upon tampering. A standard way to reverse engineer a chip was to carefully slice off the cover, take pictures, slice a layer off, etc. The idea was that by adding something to the chip, when the cover was taken off, the innards would get dissolved to prevent this.

I have no idea if this ever really went into production. Even if it did, it would have been for chips is top secret military gear.

I don’t think this is practical anymore for chips with many millions of transistors. The process couldn’t possibly preserve the very finest details plus the coarse layout doesn’t tell the whole story.

But the DoD is still thinking about it.

For what it’s worth, the Israelis have been accused of purposely letting booby trapped drones get captured, which conveniently self-destruct when Hezbollah and Hamas folks capture them and bring them back to their hideouts for reverse engineering: 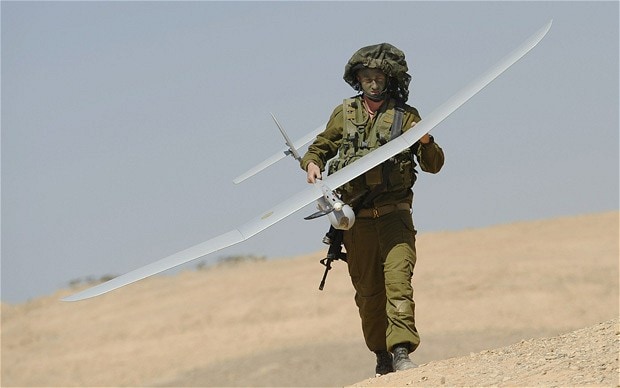 Israel accused of blowing up booby-trapped drone in Lebanon

Israel has been accused of causing an explosion behind enemy lines for the second time in a month, this time in Lebanon, thanks to a booby-trapped drone.

would the ISS conceivably have some kind of destruction fail-safe mechanism?

would the ISS conceivably have some kind of destruction fail-safe mechanism?

The ISS and other orbiting craft can pretty easily self destruct by allowing them to fall through the earth’s atmosphere. Not sure why they would want to add anything beyond that. It’s a preferable method as well so the don’t add to the space junk problem.

Here’s an example from fiction, but it does give you some ideas. One of the Tom Clancy series years ago featured a mobile command center that needed to travel internationally (making an explosive device unfeasible) but also contained sensitive information. The solution: a radio beacon that could be targeted with cruse missiles.

The HAWK anti-aircraft missile (mostly if not completely retired now) has a “self destruct” mode if it is launched and then loses lock on the intended target. Similarly, the Stinger Missile has a timed self-destruct mechanism. Don’t want those falling into the wrong hands if the fuel runs out.

A classic example is lemmings going over a cliff:
https://www.youtube.com/watch?v=AOOs8MaR1YM

Bombs are sometimes fitted with anti-tampering devices that cause them to detonate if tripped. An example from 1980: The Harvey’s Resort Hotel bombing.

The HAWK anti-aircraft missile (mostly if not completely retired now) has a “self destruct” mode if it is launched and then loses lock on the intended target. Similarly, the Stinger Missile has a timed self-destruct mechanism. Don’t want those falling into the wrong hands if the fuel runs out.

Stingers and most US small missiles have no self destruct mechanism. Stingers, TOWs, Hellfires, Javelins, … have sensors that prevent firing of flight motors and arming the warhead if certain launch parameters aren’t met. Primarily acceleration at a certain minimum. MOIC - Missile Ordnance Inhibit Circuits were developed. Early models only blocked firing signal to the flight motors; later versions blocked both the flight motor and warhead arming. Accidents involving delayed firing of flight motors made this addition necessary. Stingers/Redeyes/TOWs would fire the launch motor propelling the missile out of the launch tube but the flight motor would not immediately kick in. On impact with the ground in front of the firing crew/vehicle; the flight motor might ignite however the guidence system has lost it’s lock on the original target and would go looking for the nearest hot object [or be unguided for TOWs with broken guidance wires] - like the people in the grandstand or vehicle:eek:. Later missles incorporated MOICs as a lessons-learned safety design. If the flight motor kicks in and flight proceeds normally, the impact fuzing systems (proximity sensors on TOW 2B) are pretty reliable assuring destruction of the missile. Recovery of an undetonated missle doesn’t do much good as a reuseable item for intended purposes. Internal batteries, coolant units, and other circuitry are pretty much hosed. You’d have to completely rebuild the item with correct rocket motors, manufacture launch tubes, gripstocks, command launch units, etc… A really smart/foolish guy may attempt to repurpose the warhead as a sort of IED.

Larger missiles like HAWK and PATRIOT and some test missiles with telemetry packages have a Command Destruct under control of the launch team.

Versions of RPGs (rocket propelled grenades) have the flight motor burn through to a detonator assuring warhead detonation even if the RPG doesn’t strike a target.

A classic example is lemmings going over a cliff:

As noted in several of the comments on that very video, lemmings don’t do this. That was staged (by flinging lemmings over the edge).

My dad told me that when he was in Vietnam during the war, his office had filing cabinets with a chunk of thermite in the top, for destroying documents if necessary.

Really mundane, but security seals and tags of various types seem to be designed to break more easily than they detach from whatever valuable product they’re supposed to be guarding, to make them harder to remove. The same is also true for ring pull cans and those seals you have to peel off plastic bottles.