Removing rust from an 'artifact'

As I was excavating a flat spot for the new wood shed I built, I unearthed an axe head that had been buried for a minimum of twenty years but more likely at least 30 years. Needless to say, it’s encrusted in rust. I used a hammer to knock a bit of it off. I think it would be interesting to remove the rust and to see what the surviving metal looks like – without using a wire brush. I’m thinking of an anchor on Lady Washington that’s all pitted from so many years of sea use. It’s attractive.

I know that electrolysis is the preferred method but A) I’m cheap and don’t want to buy the stuff, and B) I’ve never built an electrolysis setup before. (Yes, I know there are instructions online and it looks pretty straightforward.) So I’m thinking of soaking the axe head for a very long time in a pail of white vinegar.

Will this work? Is there a better way, using something from the hardware store, do remove the rust?

I would use muriatic (hydrochloric) acid. I’ve never been impressed by vinegar as a rust and/or calcium deposit removal solvent, although you will then need to throughly strip it after rust is removed and coat it with a layer of some heavy oil because it will remove any passivation layer and leave the metal open to quickly rusting again. 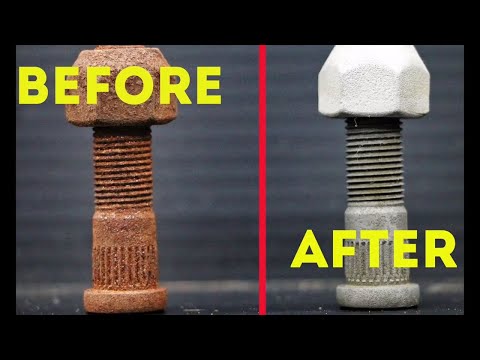 you will then need to throughly strip it after rust is removed and coat it with a layer of some heavy oil because it will remove any passivation layer and leave the metal open to quickly rusting again.

Hm. Naval jelly is supposed to leave a thin phosphate coating. I remember my dad using it when I was little, but I don’t remember if it gets rid of rust. Maybe use muriatic acid first, and then try naval jelly for a protective coating? Is muriatic acid available at hardware stores?

Look in pool supplies and/or concrete cleaning for muriatic acid. They probably don’t sell laboratory grade but then you don’t want that anyway; the 90% solution should be fine for stripping rust. Wear gloves and eye protection and use an a well ventilated area; you don’t need a respirator or hood but if you get any on your skin wash it immediately.

the 90% solution should be fine for stripping rust

I have personally seen around 20% HCl used for pickling steel. Wouldn’t 90% be fuming and/or otherwise attach the base metal itself ?

I built an electrolysis setup out of curiosity, and it was pretty easy. I wanted to clean the rust off an old pair of needle nose pliers that I found after removing some bushes. The hardest part was finding a sacrificial thing to use. Eventually I found an old rail road spike.

The next hardest part was attaching leads to the rail road spike and pliers. After a few false starts, I just stripped about a foot of scrap Romex, and wrapped it around each piece multiple times.

For the power source I used a jump starter, which is just a box with a lead acid golf cart battery in it.

I got a small plastic tub, filled it with water. Then I hooked things up (go read a real guide to get the polarity right), and turned the power on. Then I added baking soda to the water a 1/4 teaspoon at a time until I started to get bubbles on the wires.

I didn’t have an ammeter to hook up, but based on the drain on the battery, I must have only been pulling a few milliamps. The setup ran for about 72 hours with out even lowering the charge indicator by one dot (out of 4). I didn’t cause a hydrogen explosion or poison myself with chromates.

The rust on the pliers was much decreased, and the water was full of rust. I didn’t do anything to the pliers so they flash rusted in a few hours and might be worse than when I started.

I let the rust settle out of the water, then accidentally spilled the water on the floor in the patio room. Now that the water was disposed of, I scraped out the rust layer into a garbage can.

Or just go buy a container of Evapo-Rust and let it soak for a few days.

I wouldn’t leave it overnight; just submerge it for 10-20 minutes to strip the oxide layer, then wipe it down and see if has removed the rust. Obviously with a more delicate piece you’d want to use more careful methods but the o.p. is stripping an axe head, which is basically just a big lump of steel.

“Pickling” steel removes the light scale and passivation layers (as well as lubricant oils that may be left on the steel from the mill or other processing) in preparation for galvanization; it won’t take off thick layers of developed rust.

I happen to have a bottle of Krud Kutter in my bathroom cabinet. The ingredients are as follows: water, ethoxylated alcohol, sodium metasilicate pentahydrate, glutamic acid, N-diacetic acid, tetra sodium salt, potassium hydroxide.

I use it to get soap scum off the shower; it’s more effective than conventional bathroom cleaning products.

I don’t have a photo of the axe head I found, but the rust is similar to the one in this photo I found online: 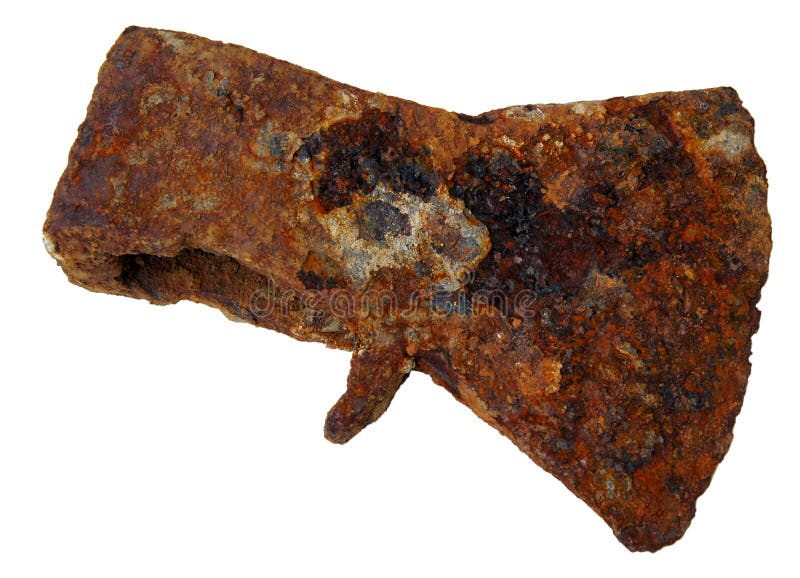 Maybe more like the left side of the photo. The edge doesn’t appear to be in such bad condition, and there aren’t bits missing from where the handle went.

Naval jelly is supposed to leave a thin phosphate coating.

Cite for this? I’ve never heard that. My understanding is the active ingredient in naval jelly is phosphoric acid, which reacts with the rust. You are supposed to thoroughly rinse the jelly off after a few minutes.

The actual datasheet for the product says “Product is not a rust preventer and must be protected with a clear coating or primed & painted within 24 hours of application.” and “The rust dissolver should not remain on a surface for more than 15 minutes.”

Whoa, that’s super rusty. Sandblasting is probably best for something durable like this but that axe is bad.

It certainly was available 30 years ago when I was a young teen. It seems that mixing cheap muriatic acid and torn up aluminum foil in a 2 liter bottle would make a way better kaboom than you’d expect. This was back when those bottles were capsule shaped and had the base glued on so it probably wouldn’t work today.

Whoa, that’s super rusty. Sandblasting is probably best for something durable like this but that axe is bad.

Well, it’s been in the ground for three decades…

It’s not going to be used as an axe again. I jus thought it would be interesting to remove the rust without removing any metal.

My son worked part-time for a mechanical engineer who had a side-gig restoring Jeeps. They had a big drum of stuff called Evapo-Rust, which he says worked amazingly well. You can buy jugs or buckets of it from many common stores like Walmart, Home Depot, Harbor Freight, etc. My son said they could dunk rusty old car parts in Evapo-Rust overnight, and they would be shiny and clean the next day. Your axe might require a longer soak. It is supposed to be water-based and nontoxic. Their claim is that one gallon can be re-used until it has removed all the rust from 300 pounds of steel. It gets a lot of good reviews online.

Thanks for the tip.

For anyone curious, I found it on Amazon:

From the Manufacturer Krud Kutter Paint Prep Rust Remover Gel removes rust from metal prior to painting. The proprietary formulation into every void of metal dissolves rust and oxidation through chemical action. Cleaning...

They have a number of “Krud Kutter” products but that’s the only one I’ve found that’s specifically designed for rust removal. They have everything from degreasers to concrete treatment to mold and mildew removal.

This particular one is a spray-on gel.

I happen to have a bottle of Krud Kutter in my bathroom cabinet. The ingredients are as follows: water, ethoxylated alcohol, sodium metasilicate pentahydrate, glutamic acid, N-diacetic acid, tetra sodium salt, potassium hydroxide.

I use it to get soap scum off the shower; it’s more effective than conventional bathroom cleaning products.

It may not be the same thing. They have a whole line of products for different applications. I doubt the rust remover would help with cleaning soap scum, but one of their general cleaning products probably would.

By the way, I’m not endorsing the product, I’ve never even used it before. It might be awful as far as I know.

It may not be the same thing. They have a whole line of products for different applications.

Yeah, the bottle I have doesn’t mention rust. I didn’t realize they made more than one version.

Reverse electroylsis as mentioned above works really well. You will get the best results for the least amount of elbow grease and not a lot of equipment costs. The battery charger hooked up to metal in water freaked out my significant other however. I’ve used it many times to restore old tools and machine parts. It will take it down to bare metal and you will want to oil or paint soon.

Next best for me is a cup wire brush on an angle grinder. There will be a patina left which isn’t all bad. Rifle parts used to be browned instead of blued to prevent unwanted rust Basically allowed to rust and then the surface rust rubbed off.

How to Brown Gun Parts

Gun barrels, receivers and other hardware found on firearms are all made of metal and as a result they are susceptible to corrosion. Browning, also called russeting, is a chemical process that changes the chemical structure of the metal surface of...

If you aren’t planning to use it, I’d say it’s more interesting the way it is - the rust is part of its history.

If you just want to do it for fun, there are some really good restoration videos on youtube that show restorations of axe heads and cleavers and whatnot in the kind of condition yours is in. Here’s one of them: 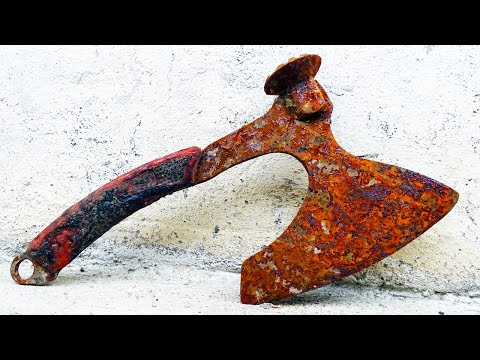 If you aren’t planning to use it, I’d say it’s more interesting the way it is - the rust is part of its history.

I think it would be more interesting to see the pitted metal underneath the rust.

Sure. I don’t think it has historical value, so it’s totally cool whatever you want to do with it.