I often wonder if some of those who have had many exposures to low viral loads may build some immunity. I know of several people who have antibodies for the virus but are not aware of ever having and symptoms.

Many people were infected but had no symptoms. This is why the virus is so insidious. There is no guarantee that being infected provides immunity, as the antibodies don’t last forever. There’s a reason most people need to be vaccinated twice.

@ Enjoy_Slurm
I’m pretty sure the Quarantine Zone is about the coronavirus.

It’s pretty obvious that a question in this forum about “the virus” is about the coronavirus. Please don’t ask obvious questions.

I often wonder if some of those who have had many exposures to low viral loads may build some immunity. I know of several people who have antibodies for the virus but are not aware of ever having and symptoms.

“Some immunity” is what antibodies are. Not having noticed symptoms does not mean they had low viral loads or weren’t contagious though, and we don’t know how well natural (or “artificial” immunity) works long term.
It’s unclear if what you are wondering is something for which the answer is a clear yes, or a tentative maybe, since it’s rather obvious “low viral loads” here is a vague and unspecified exposure.

I’m pretty sure the Quarantine Zone is about the coronavirus.

. . . the coronavirus and its variants.

coronavirus and its variants

Not a good band name.

Not a good band name.

I’ve tried booing them off the stage, but they’re not taking the hint.

I think @HoneyBadgerDC may be asking a question which has also been bubbling away at the back of my mind. Without trawling for cites, the received wisdom seems to be that there is, loosely speaking, a threshold amount of virus required to cause infection/disease. Typically twenty minutes in close proximity with an infected person, or something like that (don’t hold me to twenty minutes!)

But what about just a few virions here and there, say - a few seconds contact as you pass someone on the sidewalk - they are infected but not coughing; you are exposed but very slightly. I’m sure I’ve heard (UK) government advisors say something like, that’s not a problem, your body can cope with that. And I guess these sorts of minimal exposures may be frequent, at least in urban environments.

OK, if that is the case, what’s going on? Is your immune system coping with this minimal exposure in some way? If so, is this repeated exposure to a few virions here and there sufficient to produce a level of immunity? Is your body “coping with” this exposure in a different way? What, if anything, do we know about this?

(And my apologies, @HoneyBadgerDC, if I have misrepresented your OP).

I was going to quote some stuff, but there’s a decent amount of info here. Too much to directly quote:

Defense Mechanisms of the Respiratory System - Lung and Airway Disorders -...

Defense Mechanisms of the Respiratory System and Lung and Airway Disorders - Learn about from the Merck Manuals - Medical Consumer Version.

The mucus is frequently sent into the digestive tract, where the coronavirus cannot survive. In short, the respiratory system is somewhat hostile to viruses, and many viruses will die long before they can come into contact with the immune system. The more “attacking” viruses, the more likely any will get through your respiratory defenses. I don’t think there’s a critical load as such, more like an unskilled person trying to get a three pointer in a basketball game; if you do it enough times, just by chance one will get through, and there’s a lot of basketballs, er, viruses being thrown.

In addition, we have helper T cells. We have many, but only a few can respond to any particular antigen. The helper cell, when activated, will activate B cells, which will produce antibodies, and some of those B cells will survive to deal with any future infections. (The whole multi-step process is kind of complicated, not helped by a long chain of command, but the next time the response will be faster.)

The likelihood of a single virus bumping into the corresponding scout cell is pretty low. If only a few viruses get in, they might not trigger an antibody response, yet they may still be dealt with by other parts of the immune system.

You can see a list of anti-virus responses here:

According to that article, Natural Killer Cells simply target cells that don’t provide enough MHC antigens. (Those are your antigens, and would trigger an immune response if you’re a tissue donor. It’s like an IFF. If you don’t display it, Natural Killer Cell time!)

Alternatively, the virus will successfully infect the person, and soon they’ll be producing enough virus particles that helper cells will be activated, but by this point the person may be feeling rather rotten.

Some people will be lucky, and the virus will encounter the appropriate helper cell early on, so the person produces antibodies before there’s enough virus to get them sick. There’s also slight differences in antibodies (this is based on genetics, so your antibodies will not be exactly the same as your neighbor’s, leaving an opportunity for someone to be more genetically resistant to the coronavirus).

Sorry to double post, but I found this video that goes into some detail as well: 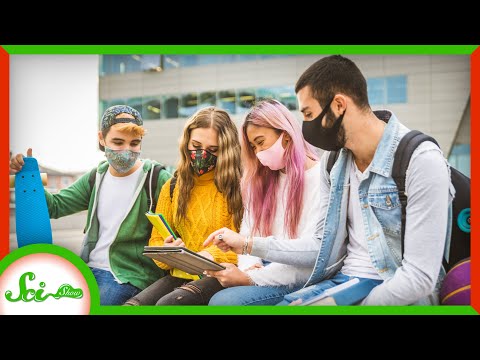 You explained it perfectly, thank You.

You explained it perfectly, thank You.

OK, if that is the case, what’s going on? Is your immune system coping with this minimal exposure in some way?

The bodies immune system is coping with prospective infections from known pathogens (to almost all of which it has antibodies) in every breath or incursion across the skin membranes. Even unknown pathogens that have similarities to known pathogens can be ameliorated with existing antibodies until the B cells can build the precise match.

The immune system isn’t metaphorically sitting back under a palm tree sipping pinas coladas waiting for a urgent call to actions stations when an infection enters the body.
In immunological terms it isn’t a question of why does a body gets sick, it’s how does a body stay healthy given it is under continual challenge.