Gideon John Tucker (February 10, 1826 – July 1899) was an American lawyer, newspaper editor and politician. In 1866, as Surrogate of New York County, he wrote in a decision of a will case: "No man's life, liberty or property are safe while the Legislature is in session." He was born on Laight Street, near Canal Street in Lower Manhattan, New York City, on February 10, 1826, the son of Alderman John C. Tucker, a leader of the Locofocos. In 1844, he became a lawyer's clerk and subsequently wrote f...

There are many severe problems with the Republican Party, but an opposition party opposing the legislative agenda of a governing party is utterly mundane behavior in pretty much every democracy.

In Parliament, the opposition is referred to as the Loyal Opposition.

What the GOP is doing now, and has done since at least Obama was elected, if not even earlier, is to oppose everything, not out of any sense of loyalty to the country, but merely to win political points against the other party.

The classic example is Obamacare. Anyone with a brain knew that the US healthcare system was failing millions of people, and needed some kind of fix. Obamacare was a market-based approach to solving the problems, and was literally based on a Republican-created state level plan. Any honest analysis of the plan by the GOP should have led to the GOP largely supporting Obamacare. But that didn’t happen. They spent years railing against it, and “doing everything they could” to repeal it. Remember “Repeal and Replace”?

And that’s how we know their opposition was a lie. Because when they did finally have the power to “repeal and replace” Obamacare, they didn’t do that. All their years of whining about Obamacare were proven to be nothing but bullshit, that they knew was bullshit, and was only ever about trying to make Obama and the Democrats look bad to low-information voters.

And that’s not “loyal”, in any way, shape or form.

The trouble with this analysis is that they came within one or two votes to repeal, while not having the slightest replacement in the offing. So they did come awfully close to just repeal.

Incidentally, not only was it very similar to Romneycare in MA, it also was based largely on Republican proposals in around 1994 to counter Hilary’s medicare-for-all proposal.

While it is the minority party’s job to oppose in Canada, it still takes only a majority of parliament to invoke cloture and eventually force a vote. In the US, a minority can block cloture. AFAIK, no parliamentary democracy allows that.

. In the US, a minority can block cloture.

Only if/when/where/how a majority chooses to permit it. The filibuster is definitionally a tool maintained by a majority for the purposes of a majority (although not necessarily, or even typically, a majority defined strictly on party lines).

Yeah, it’s also extremely normal for opposition parties to have divergent policy views on what is detrimental to the country and its people. Defining disloyalty to mean not supporting your personal views on healthcare reform is not a workable way to run a democratic system.

We don’t need, or want, an “agenda” from either party.

That’s as absurd as claiming that a business owner shouldn’t have a business plan, or educators don’t need a curriculum, or architects don’t need blueprints.

Actively governing the entities whose voters have elected them to office is political parties’ goddamn job. Yes, they most definitely do need a coherent and responsible agenda for what they see as the major tasks and best approaches for such governance. And when they get elected, they need to serve their constituents by implementing that agenda as best they can.

Cheezits Rice. I knew that Republicans have been rapidly failing in recent years at the fundamental task of articulating or implementing any vision of governance other than greedy chaotic obstruction and destruction, but I don’t think I’ve ever heard a more pathetically feeble excuse for that failure.

“Er der herp derp, our being totally shitty at constructive governance isn’t a bug but a feature! Because government bad! So vote Republican and get more bad and shitty governance! MAGA!”

Did We, the People, elect Joe Biden to look into everyone’s bank accounts? To decree mandates that also destroy livelihoods? To sic the Justice Department on parents who are vocal at local school board meetings? To spend $3.5 Trillion dollars we don’t have? Nah!

The problem is that politicians of whatever stripe try to do too much. The best government is that which governs least.

Yeah, it’s also extremely normal for opposition parties to have divergent policy views on what is detrimental to the country and its people. Defining disloyalty to mean not supporting your personal views on healthcare reform is not a workable way to run a democratic system.

Sure, there are times when there’s legitimate disagreement about which policy is the correct one - my point is, based on their behavior, it is clear that the Republican opposition to Democrat policies isn’t based on an honest assessment of their effects. Remember “Make Obama a one-term President”? And I already mentioned repeal and replace, which made it clear that the Republicans had no suggestions for “replacement” policies.

And let’s discuss the Supreme Court. Remember Merrick Garland? What was their only reason for refusing to even have a vote on him? Oh, right, it was “Obama = Bad”.

This is not legitimate opposition, in any way, shape, or form, and it taints all their other opposition, because you simple cannot trust them to tell the truth about anything. And that means, when people vote, they have literally no idea what they’re voting for, since Republicans have gone out of their way to hide everything they actually believe behind a curtain of “Democrat = Bad”.

And on the issue of “not supporting your personal views on healthcare reform”, it’s not even close to that, because if I were in charge of the US, I actually would “repeal and replace” Obamacare with a proper Universal Health care system similar to what Canada has. Obamacare was already a compromise intended to appeal to Republicans, in hopes that they could move forward with actually helping Americans in a bipartisan fashion, and the GOP simply refused to do anything of the sort.

If “legitimate opposition” means “mov[ing] forward with actually helping [people] in a bipartisan fashion” then I’m afraid there are very few legitimate opposition parties in the world. Factional behavior, voting no just because you can, etc., is the norm. We have a constitutional arrangement that’s uniquely unsuited to those realities of human behavior in democratic systems, but demanding that people rise above partisanship to sing songs and slide down rainbows in a bipartisan fashion is not particularly realistic.

What’s much more concerning is the recent stuff about overturning elections. That is not nearly as normal in thriving democracies. You can find some antecedents here and there in the rhetoric of Republican figures going back decades, but there’s been a very sharp and alarming increase.

In the mid-20th century, there were actually political scientists who thought American party politics wasn’t factional enough, because it meant that voters weren’t being given clear-enough choices at elections. I think we fixed that problem, at the very least.

Again, more cliches. Are you saying you want the private sector to build highways and airports? Private armies, too?

The DOJ is responding to a request from a national association of school board members to assess whether or not some of the threats their facing are part of a larger coordinated effort to terrorize local officials. Making terroristic threats isn’t free speech. It’s not activism.

The solution is, you can always vote the bums out in the next election, although I hasten to point out that Republicans seem to be rejecting even that idea.

Obamacare was already a compromise intended to appeal to Republicans, in hopes that they could move forward with actually helping Americans in a bipartisan fashion, and the GOP simply refused to do anything of the sort.

Hell, they refused to get involved in the formulation of the legislation, even though the Dems bent over backwards.

Did We, the People, elect Joe Biden to look into everyone’s bank accounts? To decree mandates that also destroy livelihoods? To sic the Justice Department on parents who are vocal at local school board meetings? To spend $3.5 Trillion dollars we don’t have?

Are these things that are actually happening outside of the fever dreams of the delusional MAGA crowd?

The problem is that politicians of whatever stripe try to do too much. The best government is that which governs least.

So, Somalia would be an ideal government for you? Or would you prefer Yemen or Syria? I hear Afghanistan’s government isn’t doing much governing these days.

The best government is that which governs least.

Have you got any real world examples of this to show us?

I have never voted for someone in any political race hoping they would take anything back from the opposing political party. I have voted for candidates from both parties in the same election.

You are a very unusual voter. 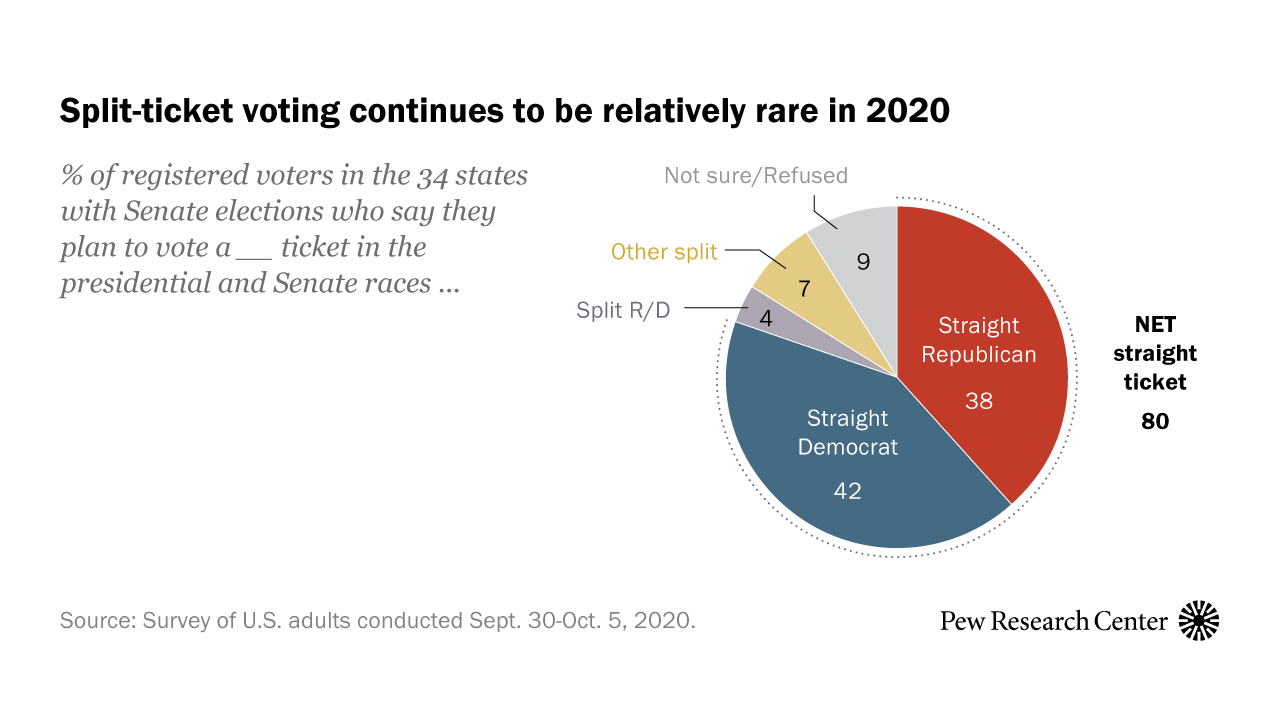 Large Shares of Voters Plan To Vote a Straight Party Ticket for President,...

Just 4% of registered voters support Trump or Biden and a Senate candidate from the opposing party.

Yes, they are happening, and they’ve all been documented in mainstream media. Which you may not follow. Not my problem.

Nope, you can look it up yourself. Like I said, they’re all well documented.

I’ll take your inability to cite your claims into account while considering the validity of them.

Maybe you can do yourself a favor, and actually look them up. You don’t have to share, but if you do so, then you may disabuse yourself of some particularly unrealistic “interpretations” of reality.

Apparently not well documented enough for you to find them.