Riding on top of elevators... anyone else?

Old memory of college days (mid 80’s). Put elevator one floor below and open the doors with a coat hanger and climb on top.

No, I wasn’t activity suicidal.

There was a case (1980’s?) many years ago in Toronto. In one of the tall public housing apartment towers, teenagers would climb through the hatch onto the roof of elevators and ride them up and down, occasionally getting off onto the crossbeams between the elevators in the shaft. that allowed then to switch to a different elevator when it stopped a floor below.

They also amused themselves by making spooky noises through the ventilation grill on the side of the elevator when other youngsters got on. At one point, one boy was leaning over making noises when his head was squashed between a crossbeam and the elevator. Must have been interesting for the young girls inside, scary noises followed by a gurgle and a flood of blood through the grill.

We did it. Before our first trip, though, We put a big box with an arrow sticking out the top, and sent it up to the sixth and highest floor. When the arrow wasn’t pushed in, we figured there was plenty of room, which there was.
It was only one shaft, so no way of falling off the sides.
We were on the third floor, and found a way of jimmying the door open, so the trick was to send someone down to the second floor to hold the elevator while we climbed on.
We didn’t do it a lot, not much to see, but it was fun. Elevator surfing was the name for it.

It was only one shaft, so no way of falling off the sides.

Nope. Still plenty of ways of falling off the side. Older elevators, which are easier for people to get access for elevator surfing, don’t get updated to meet the newer safety standards.

I have never rode on top of an elevator for fun.

No, I wasn’t activity suicidal.

In those old buildings with paternoster elevators, it was suicidal enough just to ride inside the things! 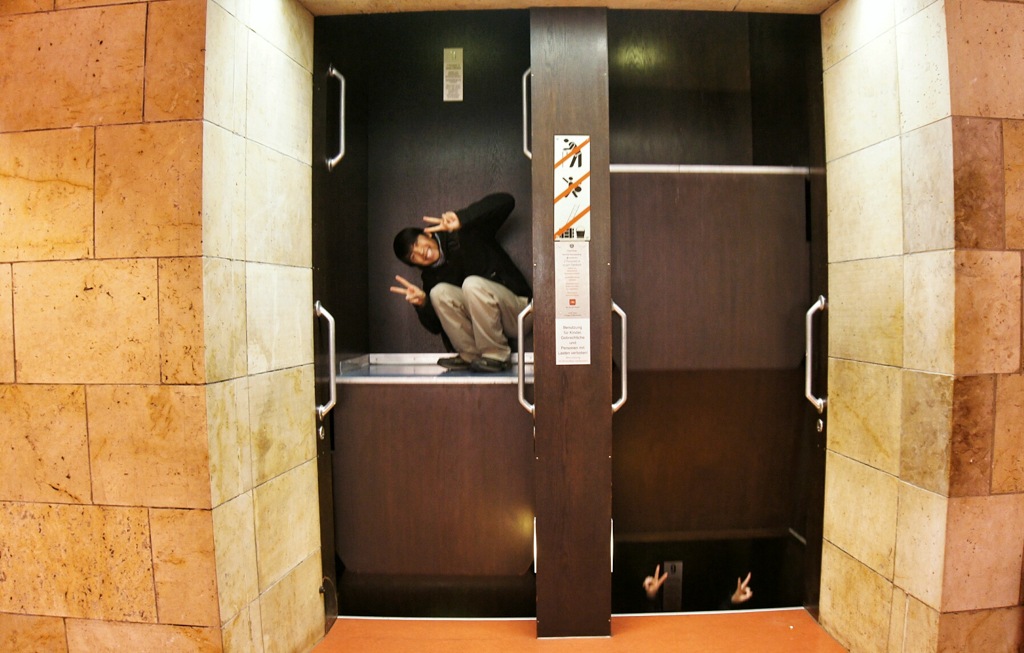 A paternoster is a chain elevator of open compartments that moves continuously in a loop. That means no doors, no stopping in between floors, no calling.

Moving this thread to mpsims, where personal anecdotes usually live.

Never rode the top of an elevator, but I did some other similarly suicidal things in my younger days, always following the lead of one friend who was recklessly fearless.

One thing we did was, in a parking structure adjoining the old Joe Louis Arena in Detroit, there was a staircase in a round turret-like structure (it can be seen in the photo in the link, at the far right).

At the top when the stairs ran out (where the ring of circular windows are in the pic), there was a ladder above to get to the roof of the turret, several feet above us and out of reach. My friend figured out you could climb this corrugated metal ring that was around each of the round windows and get to the ladder that way. I followed along. Climbing the metal ring, if one slipped off it would mean a several story fall onto concrete- either certain death, or wishing for death. I was afraid of heights, but more afraid of appearing “chicken”.

We went up there several times over the course of a few years, taking beer up there and enjoying the view. Never encountered anybody else up there. Joe Louis has been torn down but the parking garage still exists. Though my friend told me they have the ladder leading up to the roof locked down now so sneaking up there is history. 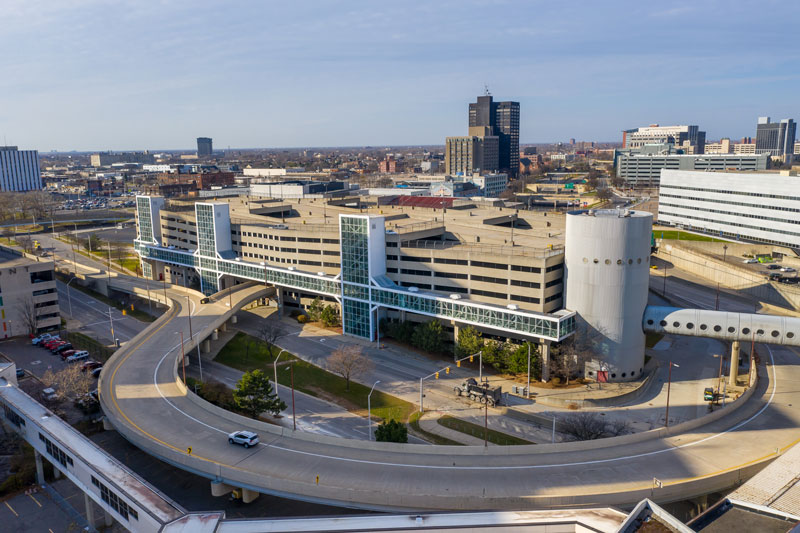 Yeah, back in my college days, I used to ride on top of the elevator in the building where student media was hosted. Other things like stopping the elevator between floors to leave hard to find graffiti and stuff.

My true joy was getting access to the elevator machinery room in one of the dorms. That elevator was controlled by a big rack of mechanical relays, meaning that it was very easy to take over the cars and mess with the riders. You boarded on the eighth floor and want to go to the lobby? Enjoy stopping on every floor. When you get to the lobby, how about the doors don’t open and instead the elevator goes straight back to 8? Juvenile, infuriating stuff for sure. But in terms of the kinds of pranks that were always being played in an all-male dorm, there was a certain grudging respect for the ingenuity.

I rode on top of an elevator once, but it wasn’t for fun. My company was moving into another office building and had a huge conference table with a one-piece top. There was no problem getting it out of the old building - there was a huge freight elevator. The new building just had one of the regular passenger elevators as a designated ‘service’ elevator, and the table top was too big for the elevator car. We were able to manhandle the table top into the shaft above the elevator and rode with it up to the sixth floor.

Old memory of college days (mid 80’s). Put elevator one floor below and open the doors with a coat hanger and climb on top.

We would cause it to stop mid floor and the doors would open. They’d pick another floor and it would work. Back to the floor they wanted… mid floor again…rinse repeat.

Huh, saw this done in the movie “Five Corners” and thought “Wow, that seems like such a bad idea!” and had no idea anyone would actually do it. Really good movie, BTW, for anyone who’s never seen it.

I ride them all the time, to inspect the hoistways in new buildings under construction. Always with a licensed elevator mechanic. It’s cool, but its also a bit frightening. The mechanics always, always, always mention the counterweights every time they pass. They’re silent, and will remove whatever body part is hanging off that side of the elevator cab.

Nope. Still plenty of ways of falling off the side. Older elevators, which are easier for people to get access for elevator surfing, don’t get updated to meet the newer safety standards.

This one was built in 1950 by a famous Finnish architect. Riding it was not at all nervewracking, and there wasn’t space to fall off. I’m sure you could have jammed your hand somewhere if you tried hard, though.

We never rode on top of elevators, but we did spend one Friday night playing Spades inside an elevator. We set up a card table in one of the dorm elevators, and played cards like it was the most normal thing in the world.

found a way of jimmying the door open

There was a clearly marked hole in the upper corner of the door and a clothes hanger stuck in would allow you to push the doors open. 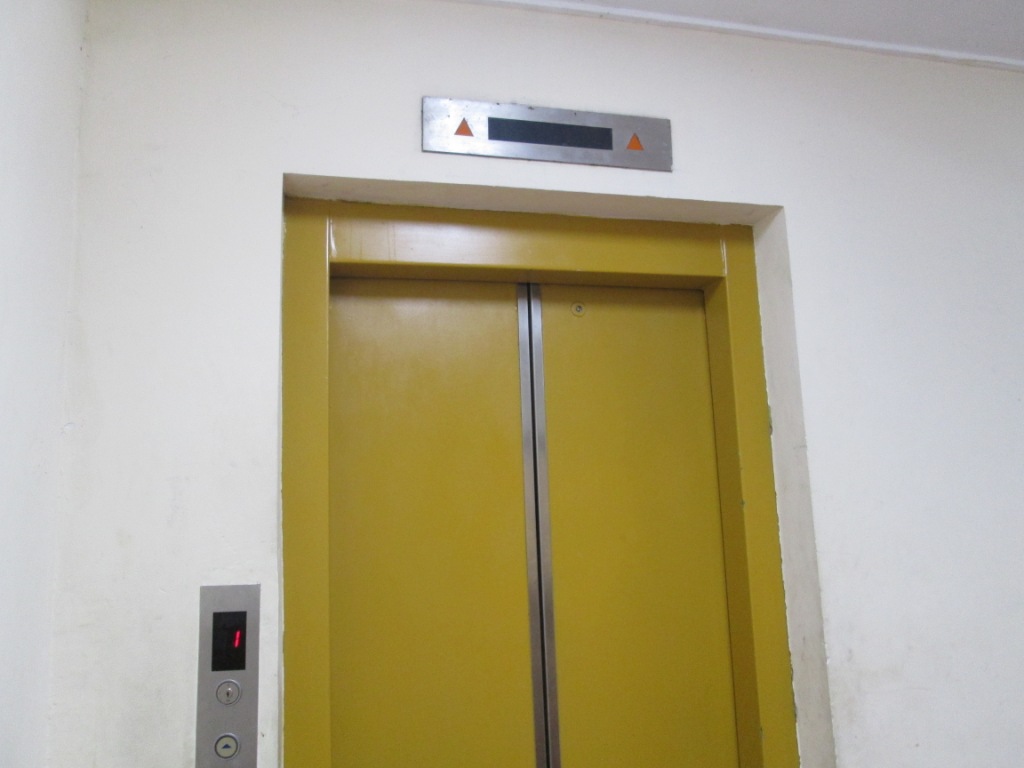 At the top of almost every elevator shaft is a smoke detector. Testing that detector is just a routine part of the semi annual testing of the fire alarm system. I have been on top of hundreds of elevators.