Quite the actor. I still like him best in Silver Streak.

I still think of Ned every time I go on a canoe trip.

YOU HAVE MEDDLED WITH THE PRIMAL FORCES OF NATURE, MR. BEALE!

[Lex stands on his library sliding ladder searching for a book]

[Otis moves the sliding ladder Lex is standing on, leaving Lex hanging from a shelf]

There is no joy in Otisville.

Makes me want to squeal.

Possibly one of Gene Hackman’s best line readings ever. 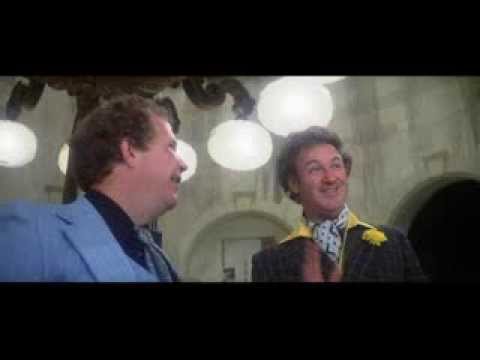 YOU HAVE MEDDLED WITH THE PRIMAL FORCES OF NATURE, MR. BEALE!

Also, when I heard the sad news this morning, I searched up that clip so I could honor him by watching it. I was then offered a couple of related links, and upon watching one, I learned something amazing, which I can’t believe I never knew before, considering Network is probably my all-around all-time favorite movie.

From the time Beatty was officially cast in that role and received his script, to the moment he walked in front of the camera to deliver that speech, the time elapsed was… three days.

He was a rapid replacement for a previous actor who wasn’t working out. The producer was talking to Robert Altman socially, Altman suggested Beatty, they called him and cast him and put him on an airplane, and three days later he was delivering the greatest sustained monologue in all of cinema.

Hell of an actor.

Beatty was fantastic in a lot of roles, and I love Network, but that monologue in Network never really worked for me.

He has squealed his last. RIP.

Dan Conner’s dad died. I kept hoping Beatty would reprise the role just once on The Conners.

Guess it wasn’t meant to be.

Beatty created so many memorable roles. I loved his pompous Director of the CIA in Hopscotch with Walter Matthau. Beatty tries to humiliate Matthau. The result is Matthau torments Beatty throughout the entire film. Beatty’s house gets shot up by a Swat team.