Tube replacement. The crews are trained to do it in the field. Takes a crane and a whole bunch of swearing. Number of rounds fired are tracked by the crew chief and the S3/J3 operations gurus.

The rifling in their artillery barrels has to be wearing out.

I would assume, given how much Russia focuses on artillery, that they would have a bountiful supply of replacement tubes on hand. However we all know what happens when you assume and Russian corruption is a major theme, so who knows.

But generally I would expect this would be a bigger problem for Ukraine. Russia manufactures them, Ukraine does not.

Now I’m confused. Is “tube” the whole barrel, rifling and all? Navy, you show up at a yard and get the whole barrel replaced, and the worn one is sent off someplace to get the liner removed and replaced, then returned to the yard’s stockpile.

No way you’re going to involve regular sailors in the process.

The whole barrel. The army tubes don’t have a separate liner as a part. The bore is plated (chromium alloy) to reduce wear. Also the propellant rounds have a bore erosion element added. Twenty page PDF on erosion additives from 2002.

I don’t know about Navy replacement. The largest current naval rifle is the 5"/54; all the large caliber rifles/ships have been retired a long time. My uncle served on a destroyer in the Pacific during WWII as a 5"/38 crewman. They’d do shore bombardment until the tubes were almost smoothbore then pitch the barrels over the side - along with a few thousand cartridge cases.

That’s why I specified 6-in and up. Here is how USS New Jersey’s deck looked after a night of shore bombardment in the Tonkin Gulf. 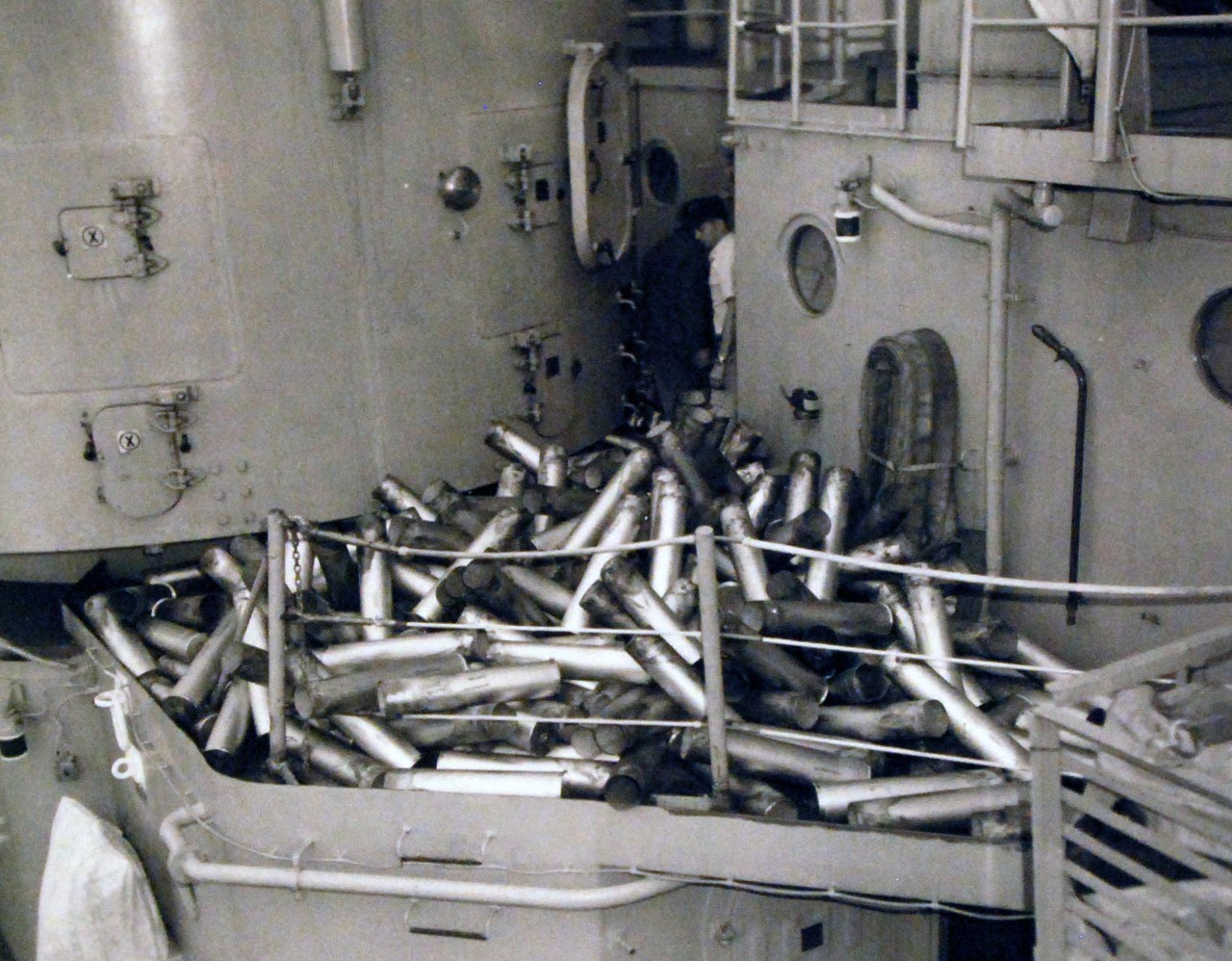 Not following you. Larger than 6" don’t exist. There are no naval rifles larger than the 5"/54 anymore. Largest US Army howitzers are 155mm. There may be some 8" [203mm] howitzers on display but are retired for US use. The cartridge cases shown on the New Jersey are from 5"/38 secondary armament turrets. Again, the entire tube is replaced on US Army howitzers.

What I meant was that I was not sure the five-inch rifle barrels had separate liners or not. The deck photo is definitely five-inch as New Jersey had nothing between her 5"/38s and 16"/50s and the latter were bag guns.

What I meant was that I was not sure the five-inch rifle barrels had separate liners or not.

1.Mod 0: used mechanical fuze setter. Two-piece rifled construction, with replaceable liner | 2.Mod 1: electronic fuze setter replaces the mechanical one. Made with a unitary construction barrel, which has a life span approximately twice that of the Mark 42 gun. | 3.Mod 2: export version of Mod 1, but now used in the US Navy | 4.Mod 3: same gun with a new control system; never put into production | 5.Mod 4: longer 62-caliber barrel (versus Mod 1 and 2's 54 caliber) for more complete propellan...

Mod 0: used mechanical fuze setter. Two-piece rifled construction, with replaceable liner
Mod 1: electronic fuze setter replaces the mechanical one. Made with a unitary construction barrel, which has a life span approximately twice that of the Mark 42 gun.
Mod 2: export version of Mod 1, but now used in the US Navy
Mod 3: same gun with a new control system; never put into production
Mod 4: longer 62-caliber barrel (versus Mod 1 and 2’s 54 caliber) for more complete propellant combustion and higher velocity and thus more utility for land attack.

AFAICT, all the ships in the U.S. fleet that were commissioned with a Mod 0 gun have either been retired or upgunned with the Mod 4 version (starting in 2007, I believe). So all 5" Naval rifles in fleet service are unitary (non-lined) barrels.

The video I posted said howitzer barrels typically lasts 25,000 rounds. That’s quite a long time for training or peacetime maneuvers.

The Russians are firing around the clock. That adds up after 120 days.

Meanwhile…They have their missiles for the rear areas of Ukraine.

Russian forces conducted an abnormally large series of missile strikes against Ukrainian rear areas on June 25. [7] The Ukrainian Airforce Command reported that Russian forces fired over 50 ground-, air-, and sea-based missiles at Ukraine and targeted areas in Zhytomyr, Kyiv, Khmelmytskyi, Chernihiv, Lviv, Mykolaiv, Kharkiv, and Dnipropetrovsk oblasts.[8] The Ukrainian Main Intelligence Directorate (GUR) reported that six Russian Tu-22M3 bombers departed from the Shaykova airbase in Belarus and launched 12 Kh-22 cruise missiles at land targets in Kyiv, Sumy, and Chernihiv Oblasts, which is the first such launch from Belarus.[9] The Ukrainian Airforce Command noted that Russian forces used sea-based Kalibr missiles against targets in western Ukraine, X-22 and ground-based Iskander and Tochka-U missiles against targets in northern Ukraine, and ONYX missiles and Bastion complexes against targets in southern Ukraine.[10] Ukrainian air defense reportedly shot down many of the missiles, which were likely intended to target critical support infrastructure in areas of Ukraine where there is no direct combat.

Sievierodonetsk is now under the control of the Russian fascist invaders. Democratic Ukrainian forces tactically withdrew from Ukraine’s 44th largest city having exacted a heavy toll from Russia’s cohorts of young and middle-aged men.

Small shifts in territorial control matter less than the overall balance of forces, which analysts say could shift back in favor of Ukraine in the coming months.

Does Ukraine consider Sievierodonetsk worth a major counterattack? That’s assuming Ukraine has the capability in a few months. Would they consider a bombed out city worth the Ukrainian lives and equipment to recapture it?

Accepting the loss of territory won’t be easy.

I think it’s more important to strengthen their military and create a military deterrent to prevent future Russian aggression.

Ukraine still has a lot of unoccupied territory to protect. Hopefully they can build missile shields to protect Kyiv and Kharkiv.

Here’s a question for the group.

The recent ISW report is quite disturbing.
Tu-22M3 bombers departed from the Shaykova airbase in Belarus and launched 12 Kh-22 cruise missiles

Ukraine needs early intel to shoot those bastards down when they enter Ukrainian air space. That’s why we’ve given them the weapons to do it.

Ukraine’s radar systems are probably destroyed? They may not have any early warning systems except intel from NATO.

Sievierodonetsk is now under the control of the Russian fascist invaders.

They made a desert and called it victory.

What is the range on an AWACS radar?

250 miles
The radar has a range of more than 250 miles (375.5 kilometers). The radar combined with an identification friend or foe, or IFF, subsystem can look down to detect, identify and track enemy and friendly low-flying aircraft by eliminating ground clutter returns that confuse other radar systems.

So flying at the Poland and Lithuanian borders - maybe. The airbase [54° 13′ 36″ N, 34° 22′ 18″ E] is toward the far side of Belarus - my google-fu is weak on finding the distance. The bombers will have to have some altitude for launch which aids detection. Ukraine is still capable on air defense. Between NATO and their existing systems, in bound missiles are being tracked. Note that the bombers are remaining in Belarus, Russian, Black Sea airspace, not venturing into Ukraine. Ukraine still has and has been given additional S-300 anti-aircraft systems. While some Russian material is crap, their air defense equipment is considered top notch. Soviets/Russians were/are well aware of NATO air interdiction plans and have developed extensive low, medium, and high altitude systems; dense and very capable. Stealth like the F-35/F-22/next generation bomber to follow the B-2 are the only method to stay in the air against formidable assets.

I didn’t realize they were staying in Belarus airspace.

That’s the most frustrating thing about this war. Russia can murder and destroy everything while Ukraine can’t ever attack their country.

I think of it as fighting Mike Tyson with one hand strapped to your chest.

And Mike is fighting with one hand, too – the other holding a hand grenade.

Includes posting from Ukraine Air Force Command with details of types and numbers of missiles used.

Takes a crane and a whole bunch of swearing.

My… life in a nutshell.

I understand now why Ukrainian forces had to pull out of Severodonetsk.

There’s also a interview with a medic. She’s completely exhausted. The medical staff is pushed to the limit.

Speaking near the frontline, south of the city of Severodonetsk, company commander Oleksandr said a core of experienced soldiers who had been fighting together since 2018 have been lost.

“My unit was 100% made up of professional soldiers who have a lot of experience. Now, 80% are incapacitated from serious injuries or death,” he says.

In comments which will alarm those backing Ukraine in its four-month long war with Russia, he says he does not know how long his unit can sustain such losses.

“I don’t even know how to answer this question,” Oleksandr says.
“It’s hard. It’s hard but we have no choice.”

Ukraine needs early intel to shoot those bastards down when they enter Ukrainian air space. That’s why we’ve given them the weapons to do it.

I don’t think the US has given Ukraine any SAMs.