When I was little, my best friend had a riding toy that he and his grandmother called a ‘scat car’. It was propelled by pumping handlebars, and it was steered with the feet. I’ve cued to 0:35 where it appears in this video.

I searched and I didn’t find anything that looks like it. Question: What was the name of the riding toy?

Seems like it has the unlikely name of an “Irish Mail”: 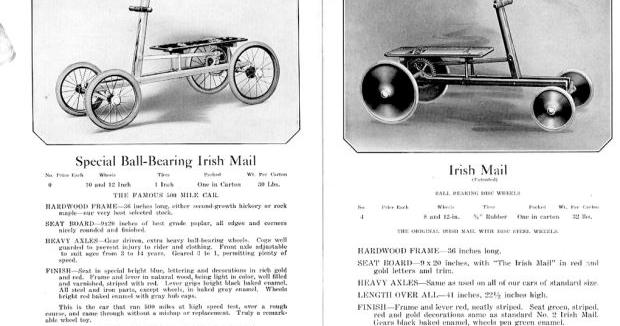 Here’s one that looks almost identical to the one in the video:

Thanks to you both. Of course, my friend’s one had more modern styling. I’m guessing it was made in the early-to-mid-'60s.

We had one almost identical to the picture Dr. Strangelove posted. We called it a push-pull car.

We had one, but didn’t connect the name with fast Irish mail train. Because the steering and propulsion were switched we thought it was the in the same spirit as “Irish pin” for frayed thread, “Irish pendant “ for rust streak, etc.

When I was a boy (late 1950s-'60s) two kids had these wondrous things. One was an Irish Mail, which I later learned was made here in Anderson, Indiana. The other was another brand. One had a one-way clutch on the drive train, so you could coast without getting smacked by the handle, the other didn’t. One had a brake lever, and the other didn’t, which made it more dangerous. I don’t remember which was which.

I’m pretty sure my friend’s had that clutch. I don’t remember brakes though, so maybe it didn’t have the clutch and you slowed down by resisting the handlebars. Too long ago to remember either way.