Scientific American: Searching for Life in Martian Water Will Be Very, Very Tricky

Scientific American has an interesting article online about the problems inherent in searching for life on Mars. 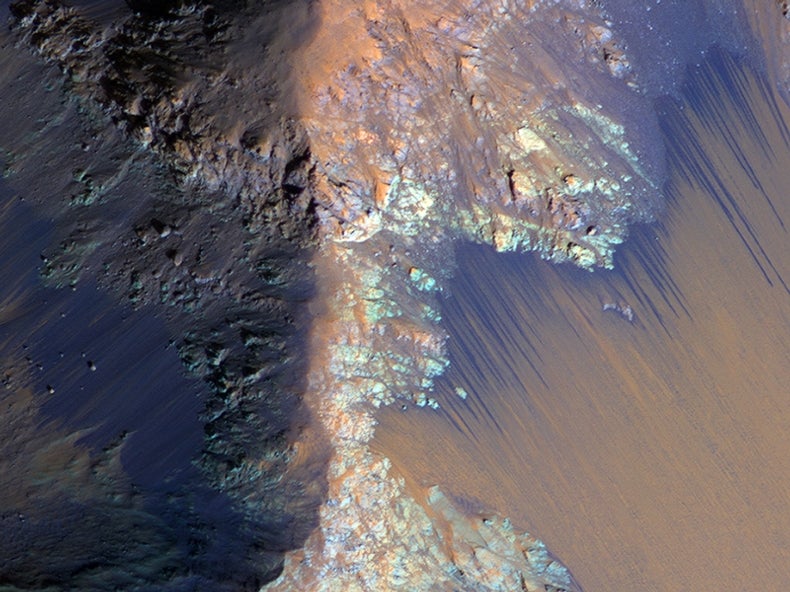 Searching for Life in Martian Water Will Be Very, Very Tricky

The problem is not exploding rockets, shrinking budgets, political gamesmanship or fickle public support—all the usual explanations spaceflight advocates offer for the generations-spanning lapse in human voyages anywhere beyond low Earth orbit. Rather, the problem is life itself—specifically, the tenacity of Earthly microbes, and the potential fragility of Martian ones. The easiest way to find life on Mars, it turns out, may be to import bacteria from Cape Canaveral—contamination that could sabotage the search for native Martians. The need to protect any possible Martian biosphere from Earthly contamination, the review’s authors wrote, could “prevent humans from landing in or entering areas” where Martian life might thrive. Although this sentiment is not new, its frank, formal acknowledgement in such an authoritative study is rare indeed. NASA is planning to send humans to Mars as soon as the 2030s; that such missions may unavoidably pose extreme contamination risks is understandably not something the agency is eager to highlight, even as it actively researches possible solutions to the problem.

Historically, in the context of Mars such “planetary protection” has primarily concerned robotic exploration. The risk of contamination is an issue even for machines, which, unlike humans, can endure being fried with radiation and bathed in harsh chemicals prelaunch to eradicate bacterial stowaways. Microbes that stubbornly refuse to die nonetheless turn up with regularity in NASA’s supposedly sterile clean rooms for preparing interplanetary spacecraft. Apollo astronauts even found bacteria on the moon that had survived an almost total vacuum inside the robotic Surveyor 3 lander that had touched down more than two and a half years earlier. If terrestrial microbes could live in places like that, why not in some of the more habitable parts of Mars?

The areas most likely to contain some form of life are also those where stowaway earthly organisms are most likely to survive. Sterilization of robotic craft seems next to impossible. With human explorers, it’s hopeless. So the dilemma is that the areas mostly likely to yield something of interest are the ones we most want to avoid due to fear of contamination.