Brown is an ascendant player at 24 years old in his 3rd season. Mike Evans is going to be declining over the next few years. He’s 28 and he’s in a 3-way time share with a 45 year old QB. Evans best years are behind him.

Sanders for Mitchell is defensible simply because we have no idea what the rookie will do, but on the 49ers it’s highly unlikely he’ll ever see as many touches as Sanders will so long as he’s starting. At least this one’s on the right side of the age equation.

There’s also something to be said for how hot Evans has started this season. Since several of these players are involved in tomorrow’s game, I’ll push the trade through at midnight unless Justin protests.

This season hasn’t started out how I imagined, but with McCaffrey coming back things should turn around a bit. His injury reminded me how critical a startable 3rd RB was to my team, which was part of the reason for this trade. There’s league-winning potential with Eli Mitchell, but I just can’t trust Shanahan’s handling of it. My team is a bit more balanced and stable with Miles Sanders on board, and his slowish start has a lot to do with being unlucky and the coaching staff learning as they go. It’s easy for me to see how he’ll turn it around and resume being a locked in RB2, which is great as a flex option.

When you make a trade within 48 hours of a game that one of the players is playing, try to explicitly confirm whether both parties are okay with the trade getting fast tracked so that the trade occurs before that game so that we don’t end up having a situation where one player thought he’d have a traded player available for those games. I don’t think we’ve had an issue with this yet, but it’s good for this to be absolutely clear. 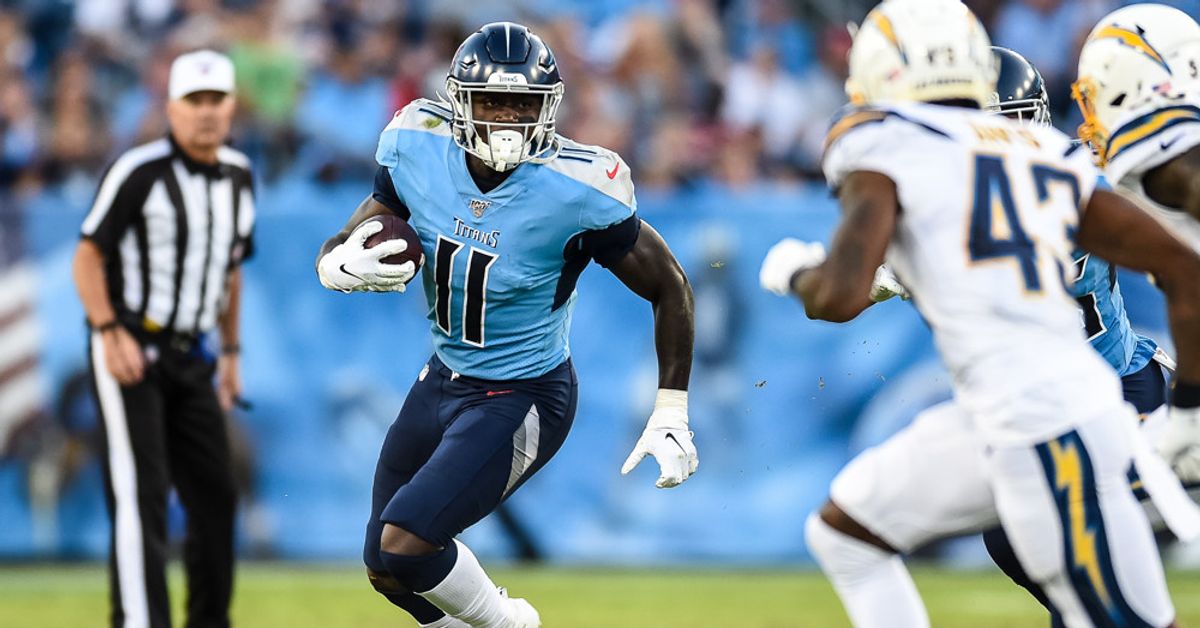 Recapping usage statistics and consistency from the 2020 season.

BigGuyFantasySports.com's Bob Lung provides a preview of his 2021 fantasy WR consistency ratings. See which receivers were the most reliable last year and how that can help you spot potentially overvalued busts and underrated sleepers in the wide...

AJ Brown is more consistent than Mike Evans. And prior to this year, he missed just two games, about on par with Mike Evans whom missed two in his second year also. Evans also ended 2019 on IR.

And AJ Brown is 4 years younger than Mike Evans.

I’m fairly convinced that Sanders is a bust.

Miles Sanders is what he is, the starting “lead back” in a RBBC. Just like a slew of other RB’s like Josh Jacobs, Darrell Henderson, DeAndre Swift, etc. He’s a guy in the huge morass of RB dead zone. Which actually has a fair amount of value in this RB starved league.

I’ll also note he had more rushing yards, a higher ypc, and the same total td’s last year as he did as a rookie (when he was in a RBBC too). His passing game usage took a hit, more from the change in his role and the suckitude that was Wentz last year.

I like Mitchell too, but let’s be honest, he’s had ONE good game (against the Lions). And only then because almost every other RB on the roster was injured. And then he himself got injured. He’s a fine lottery ticket, but the Niners have and trust Mostert, Wilson, and Hasty more. And Sermon was drafted 3 rounds before Mitchell. He’s far from “the future” in SF. He might be, but there are a lot of players in his way.

You did get a TE out of the deal.

This is not a completely unfair trade. It’s also one I never would have made. Good luck though.

Well after Damien Williams went on COVID-19 reserve, I think I’m the first person to fill out my 6 IR slots, which is… not exactly an honor. For the record, I tried to cap the IR slots at 2 this year.

I’d draw your attention to this post from last season, which generated no attention but was at least not mocked.

My man AB is averaging 8 targets, 6 grabs, 70 yds, .7 tds per game in the now 13 games he’s had as a Buc (as a midyear signee after basically two years off). Further, dude has become an even deeper threat this year, averaging over 16 ypc with an even more ridiculously resurgent, ageless 44 (!) yo Tom Brady throwing the ball as deep and as well as anybody this side of Josh Allen, and quite frankly winning me over to his cause at his ripe old age.
So maybe AB isnt a league winner, at least on my squad. But he’s no worse than the co-Wr1 on this juggernaut offense and the way this season is going with Brady this could really be something to see.

Finally I’d point out that dude was a sixth-round pick out of Central Michigan, and he is inarguably the best WR of the 2010s. Maybe that’s why TB seems to favor him. So respect for that if nothing else.

The weirdness of the IR slots is that I can add the JAX defense for this week, I want no part of Tennessee D/ST versus Buffalo and Atlanta is on a bye.

Evans has the most straight 1,000 yard seasons ever. He’ll never be the #1 WR in fantasy, but he’ll remain in the top 24 for the next five years at a minimum regardless of QB. You can’t say that about Brown, even though he has more upside.

Man I have a rough week 6. Nick Chubb is hurt and out. David Montgomery on IR. Damien Williams, who would’ve started at my other RB slot, is on COVID protocol. Dobbins is on IR for the season. THat’s 4 RBs down when I already has shakey RB depth.

I’ve also got DJ Chark, TY Hilton, and Rashod Bateman on IR. My best WR, Deebo, is on bye, and so is Kyle Pitts.

I’m going to have difficulty fielding a team this week.

He’ll never be the #1 WR in fantasy, but he’ll remain in the top 24 for the next five years at a minimum regardless of QB.

I’d lay big money against this.

It looks like I am very fortunate to have stolen a win this weekend. That result will strangely catapult me from 9th to 3rd. CMC going down and then having a setback is a disaster, of course. It would be nice to see my entire team at full strength. The trade for A.J. Brown garnered a lot of attention in the thread, but it may be Miles Sanders’ inclusion in there that actually saves my season, much like Alvin Kamara and Nyheim Hines last season.

I’ve got to start Taylor Heinicke next week, Russell Wilson going down really hurt my team and Dak is on a bye. At least I don’t have to play with no QB!

As long as it isn’t King Henry’s bye week, you’ve got a puncher’s chance. That dude is something else…

Bow before me, mortals! My team was on the bad side of “meh” during weeks 1-3, but I’ve averaged 145 points since and I’m only ~10 points from the overall top score. Unfortunately, I’m losing Kareem Hunt for a while and I am in big trouble this week with the Bye Week From Hell on tap - I am missing two thirds of my stars, but Ellis is only really going to miss the Pitt D.

Oh it’s much worse than losing Pittsburgh to a bye; with Saquon Barkley sidelined my team is cratering. I didn’t even crack triple digits this week.

I actually cannot imagine how fun fantasy football must be when you go an entire month without losing a starter to injury.

Must be nice. I’ve got 812 points against, tied with Peteys for most in the league. Only a just-barely-respectable 741 points for, again almost exactly the same as Peteys. Unsurprisingly we’re both 2-4.

Evan Engram is hereby purged from my roster. It took me way too long to do that and he was a source of constant annoyance.

Did anyone notice that yahoo is allowing straight up players with the OUT status in IR slots? I was moving Nick Chubb on my roster and the IR slot lit up as an option but it shouldn’t. He may go to IR, but he hasn’t yet, so it shouldn’t be allowed unless they changed the rules. Can someone else with a player ruled as OUT this week check if you can put them in your IR slot?