Shang-Chi and the Legend of the Ten Rings (open spoilers)

Trailer looks great. I love those wuxia sort of movies, although I like the period/medieval ones better.

A few I’ve found on YouTube movies for free are:

Looks like at least part of it takes place in San Francisco. I’m wondering if there will be a connection to Ant-Man/Jimmy Woo.

The wuxia flashback-looking scene in the trailer is the subject of theories that the yellow & green clad fighter is a previous Iron Fist.

The Yellow Claw (mentioned above) who was a “communist Chinese mandarin”, but not The Mandarin.

Yeah, Communist China in the Marvel Universe was an…interesting place. They apparently somehow still had mandarins after the Communist Revolution (IIRC, the Mandarin was also originally a communist mandarin, whatever that is).

Jimmy Woo is a really interesting character, historically. The Yellow Claw was a pretty cringey Yellow Peril stereotype (it’s right there in the name!), but the creators at the time still decided to counter-balance that by making his arch-enemy a heroic person of Chinese descent - in the 1950s, no less. I suppose there was a precedent with Charlie Chan, a heroic Chinese detective, and his sons even got to be romantic leads in the movies. But still, Jimmy Woo seems almost a weirdly progressive character to have appeared in 1950s comics.

(And in the recent-ish Agents of Atlas series, we find out the Yellow Claw wasn’t really a villain, at least not entirely, and he was actually grooming Jimmy Woo to be his successor. I think it would be a hoot if the MCU’s Jimmy Woo turns out to be the secret heir apparent to the Ten Rings or some other Atlas-like organization, but at best we’ll probably get a Jimmy Woo cameo, which would still be fun). 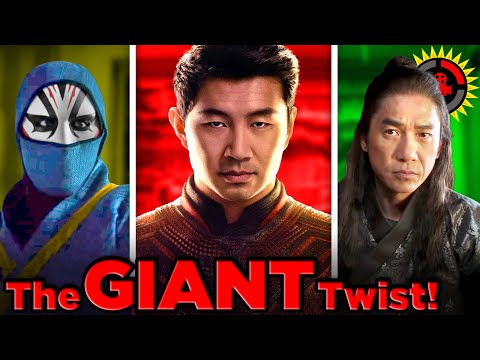 The Film Theorist thinks it is possible.

Just got back from watching it with my son. I really enjoyed the movie. At it’s heart, it’s a movie about a family dealing with grief and the impact on all the living members. Plus a lot of martial arts fighting! And karaoke! And driving fun cars!

Also, can Michelle Yeoh be in all movies from now until forever?

Yeah this movie was really good, great addition to the MCU.

I really enjoyed it to. Disney+ has been aggressively suggesting the “All Hail the King” One-Shot for the past 2 weeks, so the surpise character was telegraphed a bit. Though he certainly deserves another for that role.

Though he certainly deserves another for that role

Another Oscar I meant to say.

I saw it today, at a mid-afternoon showing in the big theater at my local multiplex. And I was surprised how crowded it was. I was sitting directly in the middle seat in an upper middle row and there were people all around me, including in the seats to my left and right. It was definitely the biggest crowd I’ve seen in a theater in over a year.

BTW, who was the villain in the mask or makeup?

I’m going to go ahead and call him “Boba Fett” because he looked badass, fought like a badass, and went out like a punk. I understand the movie built him up to be a badass and then killed him so easily to show stakes and the power of the demon dragon thingies…but come on, dude just got punked out.

BTW, I Googled and found the name of the masked character. It’s someone called Death Dealer and even in the comics is fairly minor.

A quick image search shows they don’t look that much alike besides size - as you said, this guy had fins on his head and body that the original Abomination didn’t. But all the articles about the trailer and even the MCU wiki say it’s him, down to quoting Wong as calling him “Emil”.

He was captured, not killed, at the end of “The Incredible Hulk.” And he was mentioned twice by name since - in an early episode of “Agents of SHIELD” (maybe canon?) and a Marvel One-Shot (which I think are canon). If he had been in SHIELD custody, then presumably he got out somehow after the events of “Winter Soldier”, even presuming Hydra hadn’t found a way to release/use him earlier.

ETA: I’ve found some clips that claim that Tim Roth actually did the voice for that character, so that would confirm it.

It’s weird that they just changed his look for no reason, but given what he is I guess something like that could happen. Maybe they didn’t have the rights to the original likeness?

Maybe they didn’t have the rights to the original likeness?

That’s a pretty good guess. The film that character debuted in is one of the few MCU movies that Disney doesn’t (can’t?) stream.

Maybe they didn’t have the rights to the original likeness?

Actually, he now looks a lot more like the character in the original comics.

So when we last saw Bruce, he was still Professor Hulk at Tony’s funeral in Endgame. But now he’s human again, with an arm in a cast - will there be something coming up explaining how he got that way?

Edited title since there are spoilers.

Actually, he now looks a lot more like the character in the original comics.

Right, I meant the likeness from the Hulk movie.

Probably the She-Hulk D+ show, hoping for plot-relevant rather than offhanded dialogue, but who can say. They handwaved the Smart Hulk merge offscreen, after all.

Bruce looks like times been rough since Endgame. There’s been hints dropped by either Feige or other staff that there has been stuff going on around this time not shown yet … presumably the blanks will be filled in sooner or later.

I saw it yesterday, and I was honestly kind of disappointed. Although I’m far from a purist, I was personally disappointed that the characters bore almost no resemblance to their comics counterparts, and I thought the plot didn’t really hold together. And despite the title, the whole movie was apparently just setting up the Ten Rings, to set the next Phase of the MCU - when do they stop setting up the next Phase and actually start it, and make movies that are actually about what they’re about? And at this point, the climax was practically a self-parody of MCU movies. I’m seriously now wondering if the MCU actually has a writer’s bible that requires or at least strongly suggests the climactic scene feature two massed forces facing off in opposing battle lines before wildly charging at each other and elaborate CGI fight sequences. And, of course, a glowing sky portal. At least this time the sky portal was in the side of a mountain…

On the bright side, earlier in the movie when it remembered Shang-Chi is a kung fu hero, it had some pretty good action sequences. And I appreciated that it tried for some heart, with a villain who was motivated by being twisted and broken by grief rather than random Evil, and the family dynamics between Shang-Chi, Xialing, and Wenwu. MCU movies almost always focus on “found families”, so it was kind of refreshing to see a literal family at the center of the drama.

And I didn’t think it was really bad, just…workmanlike. Which, honestly, it seems like more and more MCU projects are. As many problems as I had with WandaVision, I was still excited by how ambitious it was. I thought a lot of the risks it took didn’t pay off, but I was glad to see the MCU taking those risks. Shang-Chi and the Legend of the Ten Rings felt to me much more like they were just ticking off boxes on the MCU’s Trademark Plot Checklist.