I mentioned in a thread that someone asked me about slide rules. Apparently, this is not an item that is still being manufactured.

My very simple question is, how were they made? Accurately inscribing a scale with regular graduations through the use of some sort of dividing engine makes sense, but how do you get really accurate logarithmic/trigonometric/custom scales?

It’s been ages since I’ve used one, but you basically had to rely on simple math to get the last digit or sometimes even two. Example, if you were multiplying 108 by 22, knowing that 2x8=16 would get you that last digit. That’s why they drummed multiplication tables into school kids. I don’t know if that works on higher mathematics, but I imagine some similar tricks were employed.

The problem is not compiling a table of logarithms good for however many digits (you will not be able to read that many digits off a slide rule in any case), it’s how you engrave the final product. I can imagine various ways of going about it, but what techniques did the slide rule factories actually employ ?

As someone who had a slide ruler in the early 70s, some were actually just printed, more expensive ones were engraved. I’m quite sure the ones that were just printed were simply made the same way all other printed-on products were, they had some template system with the designated markings, that printed en masse onto the rules.

I can’t speak factually to how the ones where the markings were engraved into the physical rule were made, my guess is they were handled with machines like this which are and were commonly used for such thing:

I’m not sure of the exact techniques used, but in general, if you’re looking to make a lot of copies of something that requires a high degree of precision and accuracy, you spend a lot of time very carefully making a “master” version out of a durable material, then use that master version to make sub-masters, which are then used to make the actual item. As the sub-masters wear out during use, you then replace them with new sub-masters produced using the master.

You lose some precision and accuracy at each step, but usually it works out well enough to produce useful items. Producing the original master is the really tricky bit.

I collected antique measuring tools. Rules have been accurate for a long time. They were engraved by a “ruling machine”. It had a master rule installed that was larger than the final rules and used a pantograph to scale down the cutting tools. The cutting tool was a fine knife edge. They cut 50 or 100 rules at a time and this was in the late 1800s.

Slight but related hijack: here is the virtual sliderule I use now that I can’t get a real one anywhere for a reasonable cost.

IIRC correctly, slide rules were only accurate to 2-4 significant digits. That’s one reason why products were often “over-engineered.”

When it came to the actual laying out of scales and deciding where various markings would be, the mathematical formulas which those scales were derived from were used. Most full-size slide rules used 10 in or 25 cm scales, so to get the correct distances for 1, 2, 3, etc. on your main scale (usually labeled C or D) you’d take the logarithm of those values and multiply by the scale length. The logarithm of 2 multiplied by 10 inches will give you 3.01 inches, which is how far down the scale to make the 2 mark, for example.

The earliest slide rules were made by hand this way, and later on this engraving could be done by machine using a few different methods. Some used various machinery to vary the spacing as needed as the marks were cut in, like mixdenny described. Slide rules made this way were often advertised as being “engine divided.” Slide rules made from plastic might be made first into blanks, which are later stamped with the cutting die all at once. These dies were made from metal and the cutting tools for all of the markings were all soldered in by hand. Pre-engraved molds could also be used. These were cheaper, but the tendency of plastic to warp a bit after molding made these slide rules less accurate.

Slide rules could be printed too. Pickett was known for its all-aluminum slide rules with printed scales. Some used scales printed on paper which were later glued to the slide rule.

After engraving, ink or pigments were rubbed into them, then the face of the rule sanded or polished for the final appearance. Earliest rules were metal or wood, then celluloid-on-wood (mahogany or bamboo) became a very popular choice. All-plastic rules were made by many manufacturers and ran the full spectrum of quality. An example of a very nice one would be Faber-Castell’s 2/83N Novo Biplex and at the opposite end would be something produced by Sterling, like the model 594.

A little searching turned up this photo 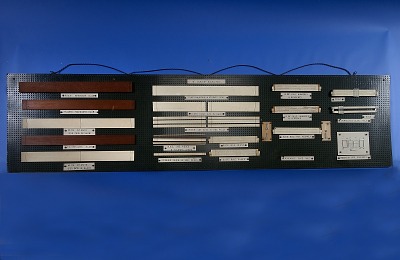 This display of steps in the manufacture of slide rules also demonstrates the capability of dividing engines. It may have been assembled by Keuffel & Esser executives when the company donated two of its early 20th-century linear dividing engines...

of a step-by-step display of a celluloid-on-mahogany slide rule being manufactured, and this PDF

has some close-ups of the logarithmic cam used in the dividing engine— “Note the lines drawn by the master tool and die maker, which were used to lay out the notches on the edge of the cam.”

So this is some concrete information, at least about Keuffel & Esser slide rules.

The appearance of K&E slide rules is very similar (in some cases nearly identical) to that of slides made by other companies like Dietzgen or Hemmi. Wouldn’t surprise me if the methods described here were used by those and other companies as well.

My high school graduation present was a 10" magnesium K&E slide rule with 80 inches of log-log scales. I used it in college, but it was soon obsoleted by HP’s HP-35 calculator with reverse polish notation. I still have my slide rule and the leather case.

IIRC correctly, slide rules were only accurate to 2-4 significant digits. That’s one reason why products were often “over-engineered.”

They were good to about 2 significant digits (maybe 3 if you were between 1 and 2 for the lead digit). But then, you’d be lucky to be putting more than 2 significant digits in for each operand, so 3 out was as good as it gets. My dad mentioned that after getting 2 digits answer on the slide rule, there was a mental math trick to determine the third significant digit that I’m sure I could figure out if I was worried about it.

The rules would likely be first laid out, as someone mentioned, using a logarithm table to draw a master - which depending on expense of the manufactured result was either printed, stamped into, or engraved on the final product.

Besides the high-end K&E slide rules, it should be noted that there were a LOT of inexpensive low-end slide rules that were simply made of injection-molded plastic; the markings were cut into the mold and generally highlighted with black paint afterwards. I still have several of these. They were sold in the stationary sections of department stores and were just a little more expensive than rulers.

Sterling Plastics made the ones I have, although I’ll bet there were other manufacturers.

The ones I remember finding in my dad’s office were of two types: cheap ones made by injection molding, as CalMeacham said, and nicer ones that has been silkscreened.

For the cheap ones, I imagine them using a pantograph system (as mentioned above) to scaled down a huge hand-created master while creating the mold, like how they scale down giant versions of coins with a pantograph to produce coin dies.

For the silkscreened ones, that’s a straightforward chemical/optical process, probably working from a giant hand-made version of the scale done on clear plastic with precision colored tape and a hobby knife used for the markings, along with dry transfer lettering.
This is exactly how printed circuit boards were made in the 1970s–a larger master was created by hand on a clear plastic sheet using red and blue tape (representing both sides of the board) and a razor knife. This was then reduced at a print shop using a camera that had a red or blue filter on the lens, to select one side or the other.

Side note: I had an opportunity to work in multiple parts of the PCB industry in high school in small shops and I found it fascinating–from drafting schematics, to manual layout of the boards on vellum with red and blue pencils, to taping to the finished 1:1 negative, to using photographic methods to mask off all but the desired traces on the boards, to plating the traces, cleaning the mask, dissolving the unplated areas in acid, reflowing the plating, drilling all of the holes, finishing edges, gold-plating connectors, and finally silk-screening the green protective coat and any lettering. All of this was done mechanically, chemically, and photographically without aid of computers. Every bit of this industry has changed.

There were rules to get the last digit, but you usually winged it. For accuracy you could go up to a 20" rule if you had the bucks. Or a 6" circular which was almost as big on the outer scale but cost a lot less.

In the 50s engineering students carried their slide rule in a leather holster strapped to the belt. Probably something Freudian.

IIRC correctly, slide rules were only accurate to 2-4 significant digits.

That’s a feature, not a bug. With modern electronic calculators and other tools that can display numbers out to 12 decimal places, it’s too easy for students to develop a false sense of precision. Very seldom is precision beyond two digits necessary or practical, and when it is, you should be paying extra attention to every step of the process.

In the 50s engineering students carried their slide rule in a leather holster strapped to the belt. Probably something Freudian.

I still have a couple of these. You could also get a brass plate with your initials engraved on it to stick to the leather holster. I had one of those, too, until it fell off.

Regarding significant digits – you got three-place accuracy on your average slide rule (actually up to 4 on the lower end of the scale, between 1 and 2). It was my need for more significant digits that lead me to borrow the HP-35 and HP-45 of my suitemates for chemistry calculations, and to finally buy the HP-25 when it came out in its lower, more affordable price.

If you wanted more significant digits, they actually did make super-sized slide rules that could give them. There was a 19th century barrel-shaped slide rule about 6" in diameter (so that it didn’t have to be incredibly long) that gave something like 5-place accuracy. They used to have one on display in the undergraduate Math office at MIT, and another was at one time on display in the US Capitol building (which it was used to help design).

Yeah, those were very elegant. The only way you could tell zoology majors was that we smelled like formaldehyde.

A friend of mine had a circular slide rule with a 10’ scale arranged in a spiral. When you performed a multiplication, say, you had to guess which arc of the spiral had the answer. There was an ordinary circular slide rule on the outer edge that would give three significant digits and then you would know which arc to use, but he was usually too lazy to do that, trying to guess instead. But it did give reliably 4 digit accuracy.