So you've damaged or destroyed something worth more than gold.

What happens to you? And how does the penalty vary between a deliberate act of vandalism and an unintentional screwup?

Gold isn’t that expensive, unless there’s a lot of it.

Vandalism is a crime; an unintentional screwup generally isn’t, unless there’s depraved indifference or negligence leading to severe injury or death. And there the standards vary significantly.

Okay, forget gold. Something irreplaceable. Art from the 16th century, or a historical artifact. Something that’s worth more than the average person could earn in their lifetime. Do they take the money out of your hide, or do you go to jail?

Actually, museums have all sorts of failsafes to shield the art from damage, so it would pretty much have to be a deliberate act. So…what happens to those people? The Little Mermaid statue has been vandalized numerous times. It hasn’t always been known who was responsible, but when it was, what happened to the vandals?

It was probably an accident in his case. But still. Even as wealthy as he is, I like to imagine he still did the classic finger-under-collar-pull “Awwwwwooohhhhh”

Probably need to know who “they” are. One assumes that “they” are the article’s owners. If the article is insured “they” are probably the insurers. Either way they may decide to come after you to make up some of the the loss. But it is going to be a civil problem, and they will need to sue you. Then it becomes the decision of the court case. If it is an insane amount of money, and you were cleary negligent, you probably get to lose most of what you have, and and get to pay a fraction of your earnings henceforth. But it will be up to the judge to make a ruling.

Criminal damage, and you might go to jail, but that isn’t up the the owners to decide. Nor is it directly related to the item’s value. You could make a full restitution of the item’s value and still be convicted and jailed for criminal damage. Nowadays you don’t go to jail for an unpaid debt. And in the end, all that you have is a civil liability for the value of the destroyed item, which is essentially a debt.

As a general rule, the law sees a progression of severity from accident to intention, generally ranging along these lines:

I may be missing some grades of intent or misusing some terms (I’m not a lawyer), but you get the idea. And, of course, I didn’t list an option for total random accident with no intent or negligence.

Also, the degree to which you might be liable can vary from one jurisdiction to another. In some jurisdictions, you can be held liable for any portion of the fault attributed to you - if you were 1% at fault, you pay 1% of the damages. In other jurisdictions, you’d have to be more at fault than some threshhold like 50% - whoever was most at fault is fully responsible for the damages.

As others have mentioned, criminal charges are separate from monetary damages. In fact, we even have separate courts and trials for each. A civil proceeding would permit the museum to sue and try to recover monetary damages. A criminal proceeding would be pursued, generally, if there was reckless behavior or an intent to damage the property. (This is why OJ Simpson could be acquitted of criminal charges, but still owe money for wrongful death in the civil suit brought by families).

I see. And the monetary damages would presumably depend on whether the item was a complete write-off or if it could be repaired/restored. To return to the Little Mermaid example, she’s had her head cut off twice. The second time, it was sent back anonymously, but the first time, a new one had to be made. And she’s lost her arm (also returned) and been painted, graffittied on, and I forget what all else. But each time, she was restored. Hans Andersen would probably love it if he knew.

The general principle with compensatory damages is to put the victim as nearly as possible in the position he would be in if the injury had not been done. So if the perfect artifact was worth a million dollars and the restored artifact is worth $200,000, then damages will be $800,000 plus the cost of restoration, and any other quantifiable loss - e.g. you couldn’t charge people admission to see it for the three months it was in restoration, so there’s a loos of proft there.

so there’s a loos of proft there.

Damn it!!! I just hate it when my loos don’t profit.

Damn it!!! I just hate it when my loos don’t profit.

You’ll be ok - if you got loos, you’ll be flush

Our local museum had something like this - a visitor tripped on the stairs and smashed three priceless chinese vases (well, they were worth £500k, but realistically they are irreplaceable).

It was eventually decided it was an accident (although there was some suspicion at first that it was a publicity stunt), but he didn’t have to pay and no charges were brought.

The guy was banned from the museum for a bit though. 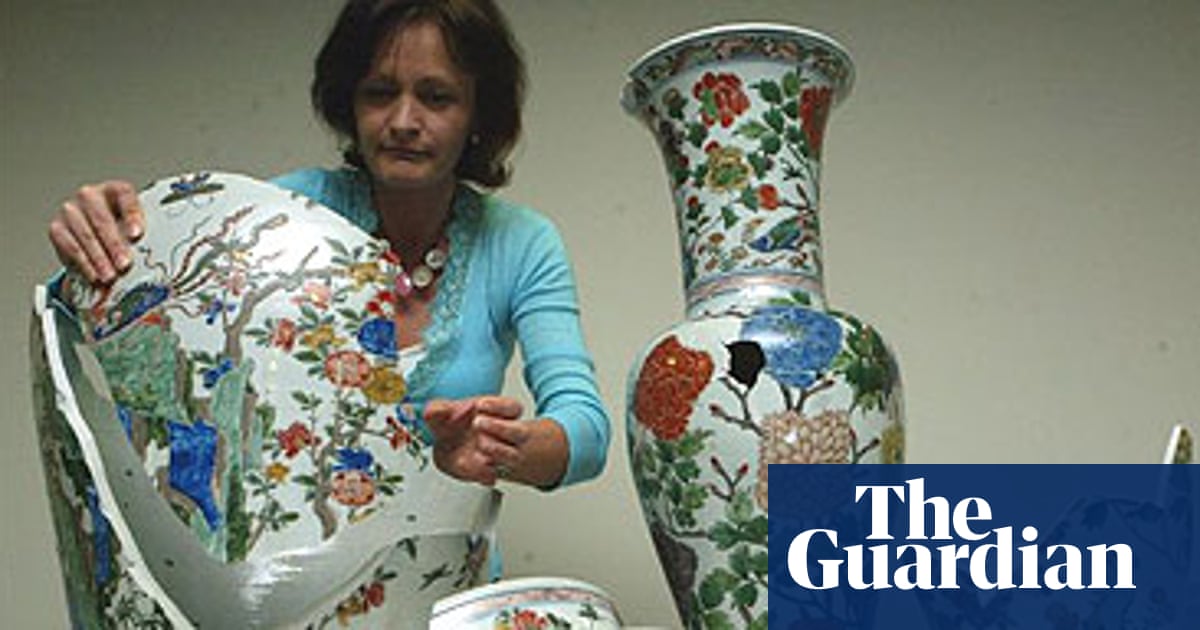 Nick Flynn: In January, Nick Flynn was caught on camera as he fell down a staircase at the Fitzwilliam Museum in Cambridge, smashing three 17th-century vases worth an estimated £500,000.

A few years ago a guy tripped over his shoelaces at a museum in Cambridge and smashed three Chinese Qing vases.

He was arrested on suspicion of causing criminal damage but released without charge.

He was asked “not to return in the near future”, though.
Edit - woah, there’s a smashing simulpost

It was probably an accident in his case. But still. Even as wealthy as he is, I like to imagine he still did the classic finger-under-collar-pull “Awwwwwooohhhhh”

But Steve Wynn owned the painting he ripped. He could have set it on fire, pissed on it, and run the remnants through a paper shredder and not had any repercussions.

But Steve Wynn owned the painting he ripped. He could have set it on fire, pissed on it, and run the remnants through a paper shredder and not had any repercussions.

unless it’s insured or used as security for a loan, or owned by a corporation which he is only a director or trustee of (eg not sole stockholder). When you’re that wealthy “ownership” or anything is not back or white.

I’ve always wondered about this in relation to civilians riding in jet fighters. I wonder, does one handle eject both seats, or just the one? If the former, then someone could pull the ejection handle and ruin a fighter that costs tens of millions.

Apparently something like this has happened, but it was in an aerobatic plane: http://www.dailymail.co.uk/news/worldnews/article-1224494/Oops-Civilian-joyride-fighter-jet-pulls-ejection-switch-mistake-lands-scratch.html I’m not sure why it would have ejection seats in the first place.

Depends on the jurisdiction. I mean, if I destroy a car or a priceless painting then the cops are just going to charge me with the same crime. I cant think of any law that adds extra years per 100,000 of value or anything. Any law like that would be unfair, classist, and abused pretty quickly. Im not even going to go into how the value of most “luxury” or “priceless” things is very much a market fiction to begin with.

As far as civil penalties goes, well again, it depends on a lot of specific things. I think what youre asking is what happens when your debts outstrip your ability to pay in a lifetime. Usually that just means bankruptcy to disown the unpayable debt. We dont have debtors prisons anymore.

In real life, it would be silly to go after someone who make 40 grand a year for a 400 million dollar debt. Things that cost that much are usually insured and the owner would go after the insurer.

A loos bit my sister once.

I’ve always wondered about this in relation to civilians riding in jet fighters. I wonder, does one handle eject both seats, or just the one? If the former, then someone could pull the ejection handle and ruin a fighter that costs tens of millions.

IANAFP (fighter pilot), but I’m pretty certain that either of the actuators in a two-seater fighter or attack plane activates both ejection seats.

I don’t think a fighter/attack plane would be flyable after the ejection sequence, even if only one seat were to somehow be actuated. Ejection sequences generally involve first jettisoning the whole canopy, except for some models that involved smashing through the canopy (such as the A-6 Intruder and the Harrier).

According to thirdname’s link, they are.

What happens if you accidentally destroy something far more valuable than your lifetime’s ability to repay? Other than suing you for what they can wring out of you and filing an insurance claim, everybody has a long cry over the loss of such an irreplacable item.