I’ve never seen a full-circle rainbow, but I did once see one of about 190 degrees, dipping into Yellowstone Canyon. Then, a few years after that, conditions were just right that I was able to see a 270-degree one from my ninth-floor apartment. In both cases, the non-sky portions were very faint, because there wasn’t very much depth of rain between me and the ground, but there was enough to be visible.

There is a icebow which can ring the sun. It also has opposite colors.

Yup, along with sundogs, vertical bright yellowish bands on either side of the Sun.

Yup, along with sundogs, vertical bright yellowish bands on either side of the Sun.

Sundogs are actually caused by the same ice crystals that form that halo, but when they fall they are oriented by aerodynamic forms so that the axis is vertical. Hence, you only get that portion of the halo to the right or left of the sun.

But if the crystals are large, then the sundogs can look spectacular, with rainbow separations of color that can extend horizontally for quite a distance.

A sundog - a piece of a larger halo around the sun or moon - is caused by tiny ice crystals in the upper air.

What Are Sundogs? Rainbows Beside the Sun!

Ever seen a rainbow-colored patch of light on the side of the Sun? This is called a Sundog (or Sun Dog)!  Discover this very cool phenononon, also called a "mock sun," how sun dogs form, and what they mean in terms of weather. Plus, how did they...

Incidentally, sundogs are extremely common. They’re about 10 times as common as rainbows. It’s just that most people don’t know about them and don’t look for them, even when they’re multicolored. I’ve had to point them out to people who were oblivious to them. But a lot of the time the crystals are small, and the sundogs aren’t all that prominent.

Sundogs are only visible, by the way, up to a solar height of about 40 degrees, and they get less likely the higher the sun gets. Your best chance of seeing one is in the morning or evening, near sunrise or sunset. And at such times they can be spectacular indeed. 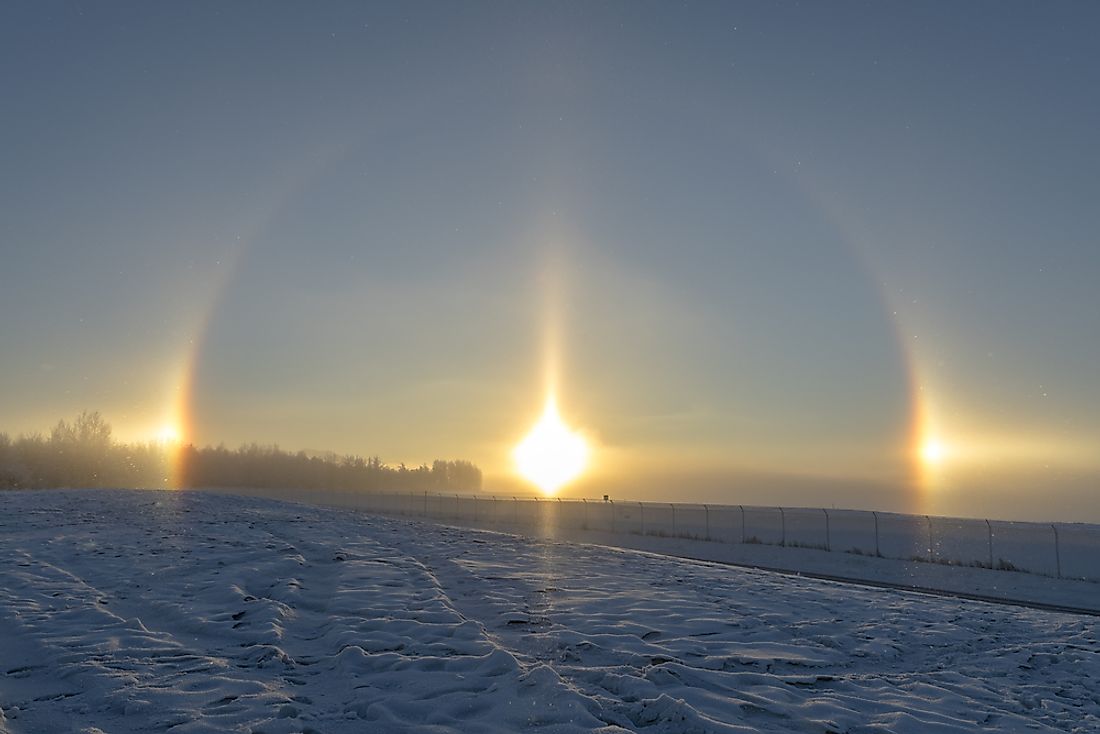 What Is A Sundog?

A sundog is an atmospheric optical phenomenon.