This drizzly morning as I checked kids’ temperatures as they rolled into school at 7:30, the clouds parted for a few minutes, and we were treated to a spectacular rainbow over the school. By 7:35 it was gone, but I kept watching the sky, hoping we’d get another one.

And it occurred to me: could it appear in a different section of the sky?

I don’t think so. I think the two main factors are the sun’s position and my position, and neither of us were going to move significantly before I went inside at 8. But the clouds (or water vapor in the air) are the third component of the rainbow, and those were definitely on the move.

This is probably a stupid weather question, and if I could better visualize the causes of rainbow formation I’d probably say, “Of course it’d reappear in substantially the same spot if it reappeared in the next half-hour,” or “Of course it could reappear elsewhere if another gust of water vapor caught the sunlight just right.” But I can’t visualize it that well, so figured I’d turn to y’all.

Unless its shooting out if a Unicorns arse, then all bets are off.

Not vapor, but droplets.

It’s possible for rainbows to form from a reflection of the sun, such as from a body of water. It’s possible that changes in cloud cover, the magnitude of waves on the water, etc. could reveal or hide such a reflection rainbow. Reflection rainbows don’t appear in drastically different parts of the sky (the sun still has to be behind you), but they aren’t quite at the same place as the normal kind.

To be more explicit: A rainbow is an arc of a circle (it would be a complete circle, except that the ground usually gets in the way). That circle always has the same apparent radius, and the center of that circle is always at the point directly opposite the Sun’s position (or the position of whatever other light source is causing it, but it’s usually the Sun).

it would be a complete circle, except that the ground usually gets in the way

Wait, are there photos of complete circle rainbows? 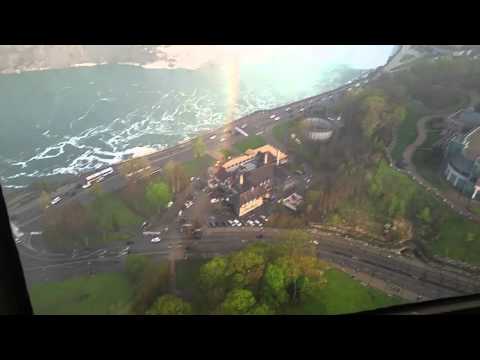 Thanks–that’s what I was looking for. I thought that was right, but wasn’t quite sure.

Wait, are there photos of complete circle rainbows?

Yup. Putting all the earlier commenters’ pieces of the puzzle together in layman’s terms …

Point your face so the sun is directly behind your head in exactly the opposite direction your eyes are pointed.

There’s a cone extending out from your eyes at a 42 degree half-angle around your line of sight. If there’s the right amount of water droplets somewhere along that cone, you’ll see a rainbow there. If not not.

There are more and different sorts of rainbows at other angles, but the 42 degree one is the biggie.

If you’re on the ground with your eyes 5-6 feet above the ground you’re mostly limited to seeing hemicircular arcs. And the lower/flatter the sun is to the horizon behind you, the taller the rainbow. But standing on a cliff over an abyss or from an airplane there’s plenty of opportunity to see fully circular arcs below with the sun high overhead.

For folks excited about all the cool optical stuff in the sky, this cite of a site will keep you busy for hours. Atmospheric Optics

There is a nice illustration of rainbow angles near the end of this recent article:

Why Rainbows Look Different in Hawaii

Rain and sunlight are the key ingredients of rainbows, but many other environmental factors are required to consistently pull off this visual trick, as new research shows.

There is a icebow which can ring the sun. It also has opposite colors.

1.) as noted above, you can see a complete circle if you’re standing on a high point and looking down into a valley, or if you’re flying on an airplane, or some other situation in which the horizon doesn’t block most of the rainbow.

2.) You can actually see a “rainbow” without being above the horizon. In some cases, round raindrops or dewdrops can be supported by the hairs on grasses. In this case a number of interesting optical phenomena can take place (look up heilingenschein, for instance), and one is that you can see the rainbow extending across the ground, below the horizon. Only, since it’;s on the ground, which intersects with that 42 degree cone to create a hyperbola, people tend to visualize its shape as hyperbolic.

3.) There is, of course, a secondary rainbow subtending an angle of about 51 degrees. It has its colors reversed (red on the inside). The secondary bow is caused by light reflecting two times from the interior surface of the drop. (tertiary and quarternary rainbows exist, but are close to the sun and virtually never seen,.)The space between the primary and secondary rainbows is darker, because light is scattered preferentially out of the area. This is called Alexander’s Dark Band after the Greek philosopher Alexander of Aphrodisias, who first described it. Anyone making jokes about Alexander’s Ragtime Band will be shot.

4.) There are two types of reflected rainbow, which aren’t centered on the anti-solar point. In one case you see you see the rainbow apparently reflected from the water’s surface – only it isn’t actually a reflection of the main rainbow itself – you’re seeing light that passes through raindrops, then reflects off the water surface – but those drops aren’t located quite where the ones making the rainbow directly are located. The point about which these rainbows form is above the horizon.

The other type of reflected rainbow is caused by the reflected image of the sun (usually from a lake or other horizontal reflecting surface) behind the observer. In this case the “antisolar” point for the reflected rainbow is above the horizon, and you may see more than half a circle. In a lot of cases, however, the raindrops aren’t present in enough of the air to see the whole thing, and you may only see a portion extending a short distance above the ground. In that case, despite its curvature, many people perceive it as straight, and it’s called a Rainbow Pillar.

There are lots of other variants, but that’s enough for now. Be aware that there are other optical phenomena that lead to color separation that aren’t rainbows, but look like them, such as the ice halos mentioned above, or sundogs, or various other ice crystal arcs.

If you’re ever looking at a sort of orange-hued murk underneath heavy clouds (where the sun is behind those clouds from your POV), that’s often the backside of a rainbow - that is, people over in the direction you are looking, beyond the clouds, are looking away from the direction of the sun (in your direction) and they see a rainbow.

Reminds me of one of my most embarrassing moments. Went outside, saw a perfect rainbow centered over our house. Grabbed the camera to take a picture.

Huh, can’t get the rainbow and the house in the shot. Maybe I’ll back up and try again.

Huh, still can’t get the rainbow and the house in the shot. Maybe I’ll back up and try again.

Huh, still can’t get the rainb…

So what makes a double rainbow? Is that the secondary rainbow mentioned above?

You can actually see a “rainbow” without being above the horizon. In some cases, round raindrops or dewdrops can be supported by the hairs on grasses. 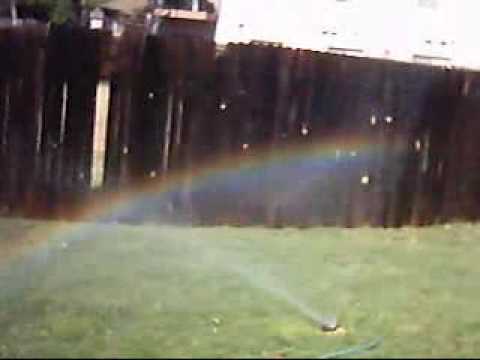 So what makes a double rainbow? Is that the secondary rainbow mentioned above?

Yes. It’s a rainbow formed by light rays that refract upo entering the raindrop, reflect twice internally, then refract again going out. Because some light is lost at each reflection (it’s not total internal reflection), the secondary rainbow is less intense, and the colors are in reverse order.

as I say, there are tertiary and quarternary rainbows, caused by three and four internal reflections, respectively. But they’re less visible because a.) they have lost even more light than the secondary rainbow, and are dimmer; b.) they are located far away from the primary and secondary rainbows, and are surprisingly close to the sun.

The Persian optical scientists al-Farisi and al-Shirazi observed the tertiary rainbow “in the laboratory” by using a glass bottle full of water as a model of a raindrop back in the 14th century (!)

Kamal al-Din Hasan ibn Ali ibn Hasan al-Farisi or Abu Hasan Muhammad ibn Hasan (1267– 12 January 1319, long assumed to be 1320)) (Persian: كمال‌الدين فارسی‎) was a Persian Muslim scientist. He made two major contributions to science, one on optics, the other on number theory. Farisi was a pupil of the astronomer and mathematician Qutb al-Din al-Shirazi, who in turn was a pupil of Nasir al-Din Tusi. According to Encyclopædia Iranica, Kamal al-Din was the most prominent Persian author on optics. ...

Shi'a Non-denominational Qotb al-Din Mahmoud b. Zia al-Din Mas'ud b. Mosleh Shirazi (1236–1311) (Persian: قطب‌الدین محمود بن ضیاالدین مسعود بن مصلح شیرازی‎) was a 13th-century Persian polymath and poet who made contributions to astronomy, mathematics, medicine, physics, music theory, philosophy and Sufism. He was born in Kazerun in October 1236 to a family with a tradition of Sufism. His father, Zia' al-Din Mas'ud Kazeruni was a physician by profession and also a leading Sufi of the Kazeruni ...

There is also the supernumerary rainbow, which consists of alternating pinkish and turquoise bands located within the primary rainbow. These are only visible when the raindrops are very large and pretty uniform in size

Ah, I never caught that the second rainbow colors were reversed until now. I went back and checked some old photos and found that they were reversed and I just didn’t catch it. Cool. Thanks.

Ah, I never caught that the second rainbow colors were reversed until now. I went back and checked some old photos and found that they were reversed and I just didn’t catch it. Cool. Thanks.

Oh , my God . Double rainbow all the way, it’s so intense! 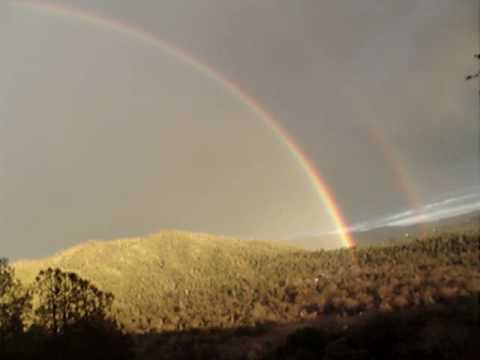