Spirometry keeps hurting me! Seeking more information for my doctors...

When I do a spirometry test, there is a powerful rattling fluttering feeling in my chest, it hurts for days, and I sometimes wind up sick for months. My several doctors don’t agree about what is going on or what to do about it, and are encouraging me to hunt for more information about this. Where can I find out more? I’m not asking for advice – I am FOLLOWING doctor’s advice, by seeking more information!

Background - spirometry is a kind of pulmonary function test that measures the ability to move air into and out of the lungs. You hold a big hose connected to a measurement instrument, take the biggest breath possible, and blow as hard as possible into the hose for a few seconds. Typically you have to do this three times, more if something goes wrong.

My problem is this deep rattling fluttering feeling during the forceful exhalation. It feels to me like it’s under my sternum, and the sensation is similar to a barking cough. Not only that, but the resulting measured flow curve looks horrible – what should be a quick rise to a maximum value and a long fairly straight decline to zero, instead looks like the back of a stegosaurus, with enormous noise. I posted a printout from a three-exhalation series here: 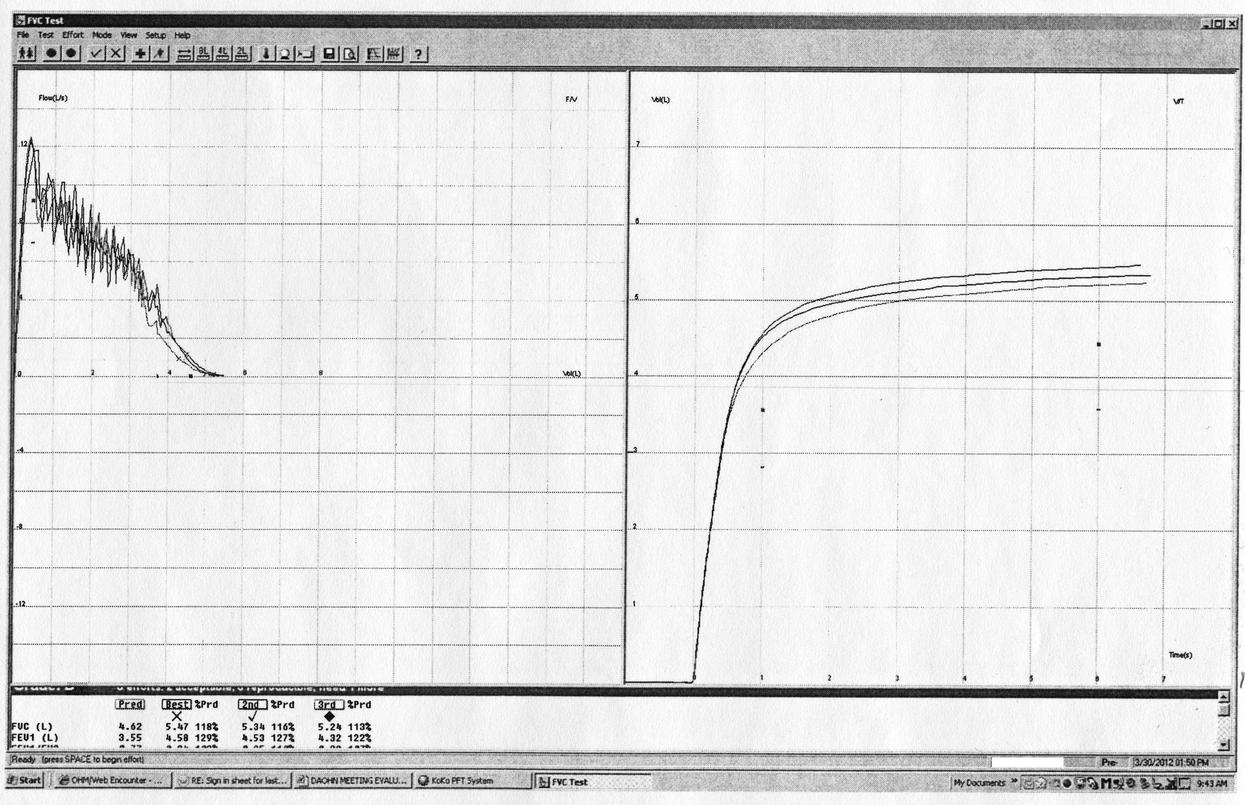 and a blown up detail of the curve in that same image here: 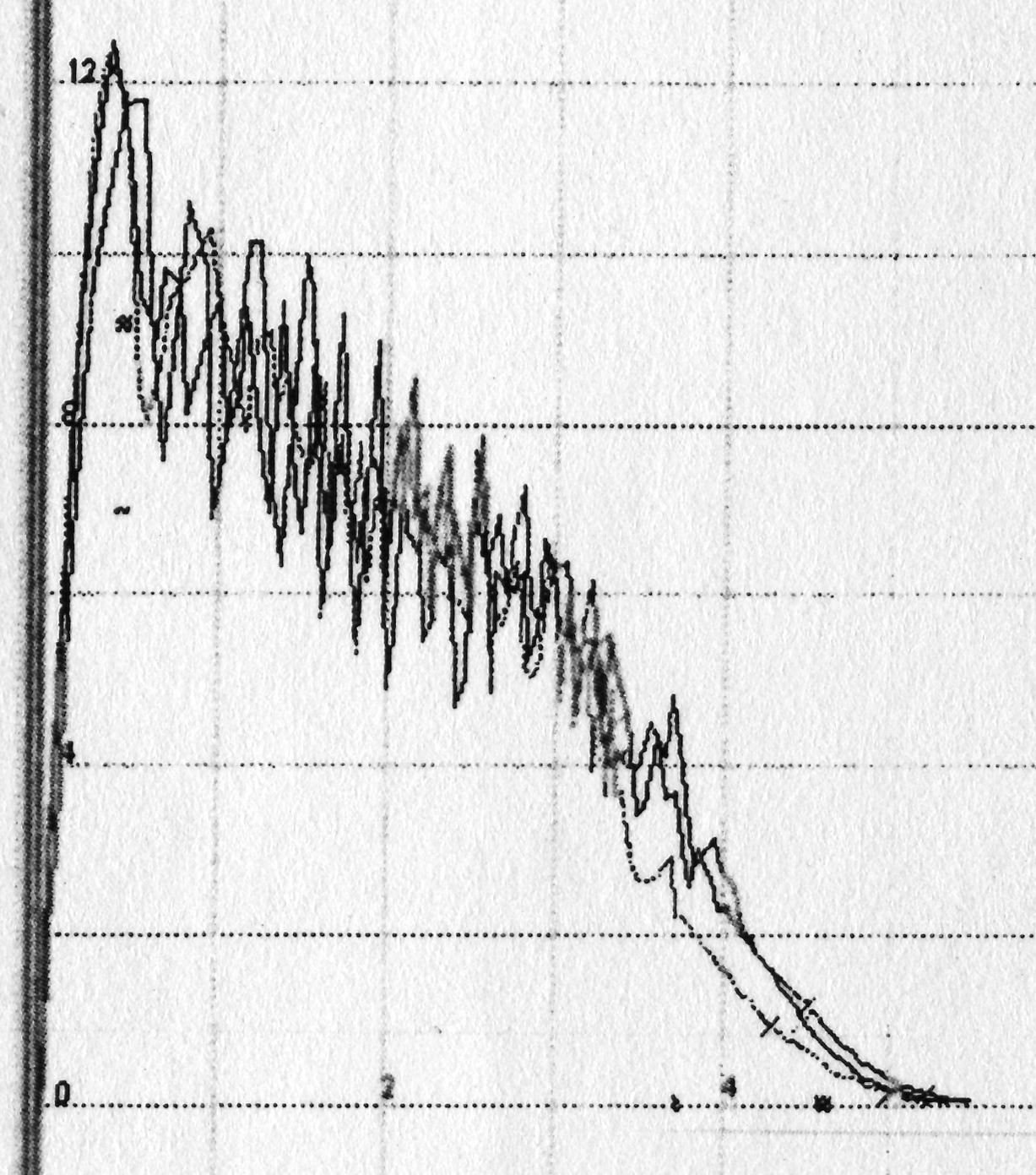 My problem is, further, that not only does this hurt while I am doing it, it leaves me really sore inside. It kind of instantly gives me a case of bronchitis. If I am lucky, it will pass within a week. If not, I will have an acute case of bronchitis for as long as six months, with on-and-off infections, steroids and codeine. My history is 25+ years of chronic bronchitis following workplace chemical exposure.

I’m being treated by two pulmonologists (one local, and one several hours away who wrote the book on chemical exposure) who cooperate with one another, and also an ENT, and an allergist, and a company physician (as this was a Worker Comp case). Of course each doctor has multiple respiratory technicians and other people administering the test.

Opinions vary - it’s coughing, it’s premature glottic closure, it’s variable effort (as if I could modulate my diaphragm at 5 Hz!), it’s my soft palate (which I would know and which is irrelevant as my nose is clipped anyway!), and so on. I have not found any graphs online that are nearly this bad, but the closest ones reference coughing and glottic closure.

If anybody can point me in the way of better information, I’d be MOST appreciative! Thanks!

Would a possibility of low lung compliance be fit? Have CHF, pneumothorax, atelectasis, infiltrates and pleural effusion been ruled out? Have you ever tried chest physio and has it helped?

Small airways can decrease in size and even collapse, airway resistance increases , expiratory flow decreases. Do you feel short of breath when walking, going up stairs? How old are you and how much do you weigh? What kind of chemical exposure?

Some “educated consumer” searching on my part brings up the topic of pneumomediastinum (given the retrosternal pain) and Hamman’s syndrome or some related condition. Since this can be caused by barotrauma and by conditions which put pressure on the diaphragm (even pregnancy), it seems possible that the expiratory force used during spirometry might be enough to cause the condition.

Excessive duration and/or intensity of activities that mimic valsalva manoeuvres, i.e. that increase intrathoracic pressure, can cause barotrauma, and hence pregnancy (and constipation and other causes of excessive straining) can be a precipitating cause of Hamman’s syndrome.

According to Wikipedia, Hamman’s syndrome is usually benign, but there are some similar conditions that are more serious, and all would require confirmation by your pulmonologist, of course.

Obviously, IANAD, just a curious busybody with time on my hands. I hope you find a solution to this; it sounds extremely unpleasant.

Thanks! Both answers so far need some looking into.

I should have said, but, I’m 56 and pretty overweight, haven’t had a drink in decades and never smoked. I don’t get out of breath on stairs and in fact I hike on hilly trails frequently and am happy as a clam going 5 miles or so without stopping at all. The chemical exposure was to isocyanates in polymer manufacture. I have open airways, never wheeze or have trouble getting my breath, and usually blow around 120% or more of my predicted numbers. I can also swim further underwater than most swimmers without taking a breath. My problem is coughing and irritation, not restricted breathing. I get frequent X-rays and have had several bronchoscopies.

Just to get the obvious out of the way, hypersensitivity pneumonitis due to isocyanates can exhibit chest tightness, asthma and COPD-like symptoms. Since your doc wrote the book on chemical/occupation exposure though, it is likely this has been checked.

Isocyanate sensitization is the diagnosis. I don’t know that anything is wrong with my lung tissue per se. I think it’s my airways. But, I have never heard of this alveolar disease and never asked about it.