I’ve noticed that on a lot old stream trains there is bell looking device on top of the smokestack.

Does it serve a purpose, or is it decorative? Locomotives built in Great Britain, where coke was the most common fuel, often used chimneys of cast iron, because they lasted longer than chimneys fabricated from sheet metal. Early North American locomotives often used wood fuel, which resulted in large numbers of glowing embers being carried through the boiler and blasted out of the chimney by the high-velocity exhaust steam. Spark arrestors became a common feature of wood-burning locomotive chimneys to reduce the number of fires started by Ea...

You sound like a man that knows his stuff so I need some insight please sir.
I am an author that is currently working on my second book. It is taking place in 1937 West Virginia mountains. The passenger train tops the mountain. Upon slowing entering into a steep 10 mile downgrade the engineer realizes the brakes are failing.

What is left to do save the more than 100 passengers aboard?

Is throwing the locomotive in reverse while in a forward motion a viable option?

As indicated in response to your other posting, you should have started your own new question, rather than spamming off-topic responses to existing threads.

As indicated in response to your other posting, you should have started your own new question, rather than spamming off-topic responses to existing threads. -

To @Rob76, this is an older thread. The person from whom you sought a response may not answer for that reason. I encourage you to start a new thread with your query. I think it’s a good topic to stay in our Factual Questions forum.

Upon slowing entering into a steep 10 mile downgrade the engineer realizes the brakes are failing.

What is left to do save the more than 100 passengers aboard?

Is throwing the locomotive in reverse while in a forward motion a viable option?

I’m assuming since it has been shifted to FQ, an answer here is appropriate.

Short of sabotage, it is really difficult to make a train’s braking system fail. Not if there humans on board the locomotive. The really bad accidents have happened when trains have moved without human intervention. Deliberately driving the train to a point where it’s speed was such that the braking system could no longer stop it before a disaster occurred is a different matter. This isn’t a mechanical failure.

The default position for the brakes is on. If the braking system was to fail on the locomotive, the brakes on all the carriages would apply themselves and bring the train to a halt.

Are you sure? The train accident detailed below (3 minute video) happened because the locomotive was shut off and the air brakes lost pressure allowing the train to roll downhill resulting in a major disaster. 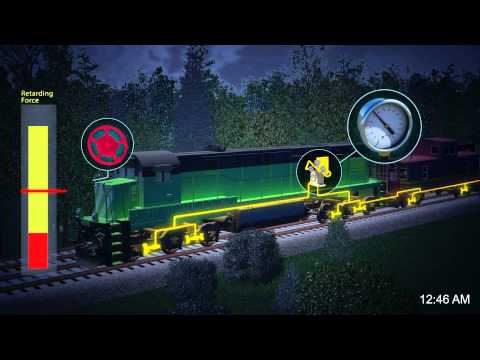 Are you sure? The train accident detailed below (3 minute video) happened because the locomotive was shut off and the air brakes lost pressure allowing the train to roll downhill resulting in a major disaster.

True. I did have that accident in mind when I mentioned lack of humans in control.

Sadly, I’m living in the past. What I described was the old vacuum brake system. For some reason it was stuck in my memory and I got a confused mix of old and modern. Perhaps it is because I like steam trains.

All modern trains us a variant of the Westinghouse brake system, which uses positive pressure to apply the brakes, and adds a set of fail safes and local accumulators. So indeed, the brake system can fail if you give it enough room. Although a huge amount of work went into preventing failures.

This overview should cover everything the questioner needs:

Thank you so very much sir.

The brakes don’t need to fail to have a runaway, the train could be overweight, the engineer carried too much speed over the crest of a hill, there could be ice on the tracks, or even just water. Once the wheels lock up, if the train keeps accelerating, then you’re gonna have a bad time.

The trick is that each car has a tank/reservoir that stores up a charge of compressed air that actuates the brakes on that car, controlled by a special valve with air hoses linking it to the other cars and the locomotive. The air hoses only act as control lines, and they also recharge the reservoirs, they don’t actuate the brakes directly.

So it’s kind of like two parallel systems in a way. If a brake hose between cars bursts, or the engineer engages the emergency brake, it dumps the air out of the control hose, which via the special valve triggers the air stored in the reservoirs to actuate the brakes on each car.

That’ll hold the train for (I think) a couple of hours, but if the locomotive is switched off it can’t recharge the reservoirs as the air slowly bleeds away, and then the brakes let go. That’s why hand brakes are needed, and the engineer at Lac Megantic didn’t set enough hand brakes to hold the train in place without the air brakes. Had the locomotive kept running all night it would likely have been ok.