I’m toying with ideas for better illumination in my master bedroom. It’s about 15 feet by 20 feet. I’m thinking it would be cool to have a lot of little lights. I’m considering adding an outlet high up on a wall and mounting a string of LED lights all along the top of all four walls. It would be the primary illumination in the room and ideally should be dimmable from soft mood lighting to bright enough to read by.

Looking for the hardware, I’m seeing lots of Christmas tree lights, and “fairy lights”, but I’m not sure that’s exactly what I’m looking for. I want good quality dimmable bulbs, soft light, maybe 2500-2700 K. Any suggestions? I’m also open to arguments that this idea is crazy and there’s a better way to illuminate the room.

I’m also open to arguments that this idea is crazy

Crazy? I would have said creepy.

(Sorry, but this is up there with dolls heads that sprout spider legs.)

I’ve had lights like these, but not along the top of the walls. Are you sure you can use a dimmer with them?

Most Christmas tree lights aren’t dimmable, and even worse, a lot of the cheap ones aren’t full wave rectified and thus flicker horribly.

Probably a better way to do this would be LED light strips. You can even get RGBW ones if the mood strikes you to have say blue mood lighting.

Most of the strip lights can use a remote that includes color changing and dimming. Not certain if the color change includes fine tuning white color temperature or not.

I’m also open to arguments that this idea is crazy

Crazy? I would have said creepy.

(Sorry, but this is up there with dolls heads that sprout spider legs.)

Heh? I don’t see why this idea would be considered the least bit crazy or creepy.

Some sort of track lighting might fill the bill for you. We bought some track lighting for the kids’ bedrooms, consisting of maybe 6-8 little dimmable lights along an S-shaped track. Each light can be pointed in any independent direction- very nice and versatile: 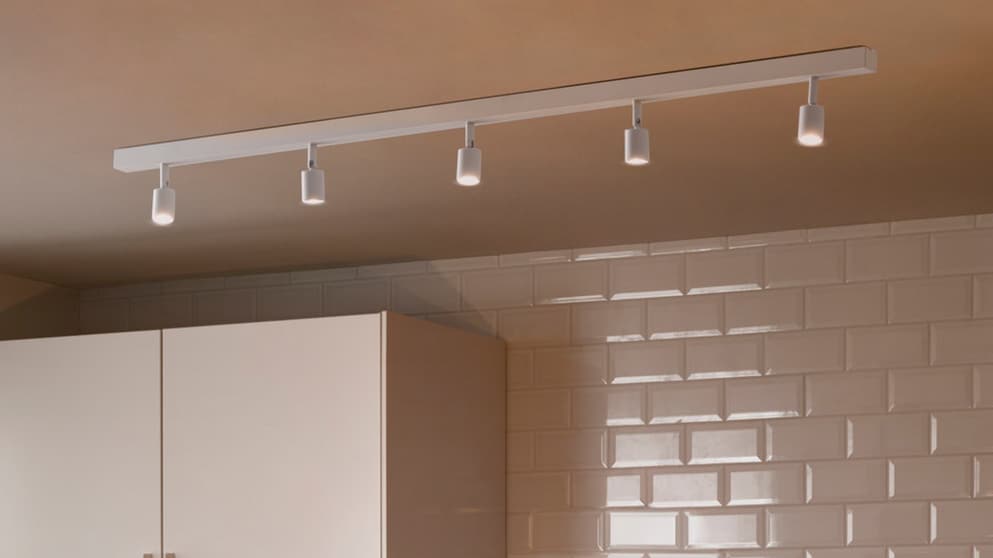 Heh? I don’t see why this idea would be considered the least bit crazy or creepy.

Looking back, you did say “arguments” not “opinions”. I could no more explain why they are creepy-as-fuck to me than I could why roses smell good to me or why loud exhaust systems seem low-class to me…

It could look real modern and clean or it might give off a sleazy 1970s bachelor pad / pickup artist / strip joint vibe. That’s probably what @Mundane_Super_Hero is reacting to.

Check out the “as installed” pix and vid for this and see if it sinks or swims for you:
https://www.amazon.com/dp/B08387CPNP

Consider rope lights, made with LEDs or incandescent bulbs. Some are dimmable, not all, and there are colors. I light my home studio this way by putting a rope light where the wall meets the ceiling. Not bright enough to comfortably read by, but it’s the ambiance I like for recording studio work most of the time.

I think the OP is lost in a dark room and can’t get out.

My son has those flat LED strip lights in his room, 50’ of string light, which basically runs one full loop around the perimeter of the ceiling. On full brightness white, the light is pretty good, but it has that sort of flat LEDness, and isn’t quite bright enough to read by. You can create custom colors by dimming each color of LED individually, so you can get a warmer light, but it’s dimmer.

They’re OK, but I don’t think they are particularly classy looking.

My youngest’s room at home has Christmas lights strung up along two sides of the room - they are icicle lights. Since they are off at college, I use their room a lot for knitting and TV watching. They aren’t dimmable or fancy or anything. They aren’t enough light to be the primary light in the room - not enough light to read a paper book without the other lights on, but they do light the corner and let me see my knitting.

I would start with cheap LED Christmas lights. See if you like the effect, then you can decide if you want to run the electrical for a weird outlet (which is going to be a weird outlet when you aren’t using it and when you sell the house) and invest in higher end lights.

I have the Philips Hue strip lights. Expensive but I do love them.

I have one behind the TV and another under the bar that separates my kitchen from the living room.

I like them because you can direct the light to the wall making the light easier on the eyes but still strong enough to see everything.

I had less migraines since doing this.

Be very careful with your placement of fairy lights, unless you want your bedroom looking like a teen-aged girl’s.

I grew up in houses with this “weird outlet” installed. They were specifically designed for plugging in a clock.

mounting a string of LED lights all along the top of all four walls. It would be the primary illumination in the room and ideally should be dimmable from soft mood lighting to bright enough to read by.

I’m not sure the Christmas or rope LEDs would be bright enough for your plans. LED strips, track lights, or festoon lights might fit the bill. The Christmas lights would work for night lights and mood lights though.

We have our own weird outlets - a closet that has six outlets, an exhaust fan, its own AC, and is on a seperate breaker - and a punch down brick. (And now we just use AWS) Sometimes your need weird outlets, but don’t wire them until you know you need them.

We have a LED strip on top of the wardrobe, so the strip itself is not visible. We have it set for waking up (5 different levels of increasing brightness) and an evening setting which is more red, which is better for night lighting.

This is in addition to a ceiling lamp, two nightstand lamps, and a downward-facing lamp on the wardrobe.

Because the LED strip is above the wardrobe, it is useless for the wardrobe interior, so we normally turn on the ceiling lamp for getting dressed in the morning, if there’s not enough daylight, or light from the bathroom.

I would not remove any existing lighting. Be aware that you will probably need some sort of wallwart for controlling the LED strip. You might not want that high up on the wall, unless you have some way of hiding it.

And even if the lighting is bright enough, your head will probably get in the way for reading. We had this at a bed and breakfast we stayed at. Was horrible to try to read while sitting on the couch because there was only track lighting. Better to have a light just for reading, especially if you tend to read printed material.

When we renovated our kitchen, our consultant recommended having 3 different levels and sources of lighting. I’ve seen seen similar recommendations from others, that lighting within a room should not be dependent on one source.