Stupid questions about my car

Yesterday my 2008 Nissan Altima Hybrid, which I have owned for an year now, threw its first tantrum. It was a hot day outside, and around 2 pm the car refused to start. Almost every dashboard light came on, including the HV battery and PS lights. I had changed the oil using a semi-synthetic type just a few days ago. No other lights were on the previous day. Finally I gave up and returned later in the evening. Same thing. However, about 15 minutes later, I was able to start the engine. All the dashboard lights went out and I was able to drive normally.

Being a total car noob, what might have gone wrong with the car? Do I need to have it looked at? Does this portend a serious problem?

Does anyone own a 2017+ version of the Altima? Would you recommend the car? I hope it performs as well as it looks.

TIA for your time answering!

(I don’t have an Altima hybrid.)

If the car won’t start, that’s a dealer issue. I hope there’s still someone at your Nissan dealer who remembers how the Altima hybrid works.

Windshield washer fluid is perfectly safe to keep in the trunk. For the other cleaning fluids, maybe not, because if they leak eventually they might do some damage and/or you won’t like the smell.

Did you follow the correct procedure when starting it? A lot of cars require you to push the brake pedal when starting, for instance. Having rented a few cars, I’ve realized the smallest things can make a difference. Did you check the owner’s manual? 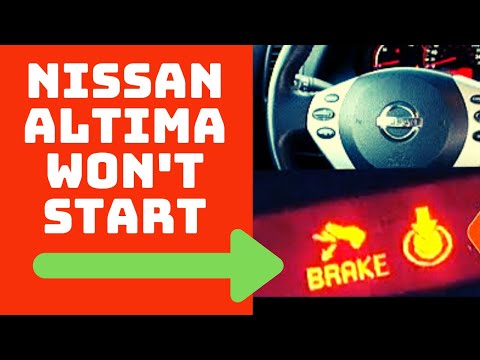 Since he’s owned it for a year, I’m guessing he knows how to start it.

I’d have the starting battery checked (if not just replaced) as well as making sure the terminals and clamps are clean.

Since he’s owned it for a year, I’m guessing he knows how to start it.

After owning a particular car for a couple years, I suddenly couldn’t start it. The key in the ignition wouldn’t turn at all. Never had that problem before…wtf?

One day a couple years ago I was coming out of a convenience store and a woman stopped me for help. She was unable to turn the key. Guess why…

So you can go awhile without realizing there’s a quirk. I think in that case the wheel had been cranked to park, so that step of unlocking it couldn’t be skipped like the previous 637 times I’d started the vehicle.

I have no experience with the OP’s particular car but higher tech can be finicky. YMMV.

I had a similar experience, but a bit different. Came out of a grocery store (after getting my cup of coffee) and this old guy asked me to help start his car. He had borrowed it from his son that morning. Anyway–he didn’t know he had to step on the brake pedal.

First, get it to the dealer, or your trusted mechanic, and let them start pulling codes to figure out what happened. Your experience is an example that something is grotesquely wrong with your car. Regardless if it started up later when cooler

Reading related woes online, it could be a bad MAF sensor, it could be your fuel pump is dying, it could be something completely different. Get to the mechanic, and start figuring out repair vs buying a new to you car relative costs.

I like hybrids myself. My last two cars have been hybrid Toyotas. I recommend both highly (but watch out for the a/c taking a very expensive crap. I was quoted ~3,000 bucks to fix the a/c on my Prius.) Don’t sweat engine braking unless you do a LOT of mountain driving. The computer takes care of all of that for you.

Go wild! Listen to the radio next time. Maybe roll down a window, even.

Being a total car noob

TIA for your time answering!

It doesn’t have to be a manual. Every automatic transmission has an L or 2/1 position where you can force it to use a lower gear if you want to use engine braking for descending a long, steep grade and that sort of thing.

So that’s the simple answer to the OP’s question – Engine braking mode is basically a hybrid’s way of emulating what happens when you downshift in a traditional gasoline powered car, allowing you to slow down on a long hill without having to use the regular brakes the whole way (which can be dangerous because it can overheat the brakes). The difference being that in a hybrid it uses the electric motor as a generator and recharges the batteries in the process.

There is a relatively new issue called Multiple Warning Light Syndrome. That is particular to hybrid vehicles. In older cars you might get a check engine light only, usually related to pollution controls, maybe just a loose gas cap. But because the systems in a hybrid are so interconnected many of the other lights will also come on.

Say you have a low battery. The check engine light, the brake light (because the regenerative braking is tied to the charging system), battery/charge system light, and other warning lights can all be lit. Makes a person think that all hell has broken loose. But once you fix whatever the original, probably simple problem, all the other lights will go off also. Dealerships and other shops just love this new “feature” because people just freak out and take the car in.

Your oil change had nothing to do with the lights. Hot day, using AC, fans, etc. probably drained the battery down just enough. I do not know the battery set up in your 12 year old car but I would guess that you will eventually need a new battery or service of that system.

Oh, and your Power Steering light came on because the hybrid model of this car came with electric power steering, rather than the old hydraulic kind. So, again this leads to a probable electric issue/

I can’t speak to all the lights, but for these two questions, yes you certainly can store these in the trunk. In fact I usually keep an old milk crate in my trunk lined with a hevy duty plastic trash bag and filled with windshield washer fluid, glass cleaner, a quart each of oil, ATF (if needed, I currently drive a 6-speed), power steering fluid, and brake fluid, a can of fix-a-flat, a little air compressor, some basic tools, a spare set of windshiend wiper blades, a handful of Ziplock bags and kitchen trash bags, some road flares, and a roll of paper towels. I’ve never had anything leak (the glass cleaner is in a pump spray bottle, not one with a trigger. That way I can put a cap on it.) If anything does leak the trash bag liner will catch it. This winter I will add a set of tire chains that will live in there as well.

My car is a 2020 and I have roadside assist with my insurance coverage so I don’t anticipate needing any of those things except the windshield wash and glass cleaner, but old habits die hard. All of those are things that, when you need them you need them, so having them on hand is a good idea. I also have a long commute on a rural two-lane mountain road, which probably has something to do with my “be prepared” philosophy.

Winshield washer fluid and glass cleaner has ammonia in it, which as you know is very strong smelling. If either leaks you’d know it immediately. I doubt they would ruin carpet, but they might discolor it. However, those aren’t combustible so are safe to keep in the car. On a very hot day the pressure in the container may increase, but I doubt they would “explode.”

Gasoline is another story. The vapors can escape into the car and create a hazard. I doubt it would explode in a big Hollywood-style fireball, but fires a real possibility.

No answers for your car’s starting issues.

As for storing cleaners, etc… in your trunk, no problem UNLESS in is in the form of an aerosol can. I use Sprayway brand glass cleaner in an aerosol can, label states “Do not expose to heat or store at temperatures above 120 deg. F as container may burst” Depending on where your live and the color of your car, your trunk temperature may exceed 120 deg. on a hot summers day.

Thank you. What about this product in the dashboard cup holders?

The last visit to Firestone a few weeks ago for a general check did not identify any problems; maybe this time they will find something. I saw an offer for a free version of a sensor called Nonda - and promptly got it, only to find my car does not have an interface to plug in this thing. Apparently it pulls out the codes and displays them on the smartphone app.

Yeah the real danger in storing windshield washer fluid is the bottle getting punctured or the cap coming off when it’s rolling around in the trunk, and then you go to use it and discover an empty bottle. Not that that’s ever happened to me.

If you see a “no engine braking” sign, it’s directed at semi drivers. Engine braking makes for an obnoxiously loud noise.