Do they actors hear the canned laughter?

Very few sitcoms use actual canned laughter (laugh track). Most of the time, if you hear laughter, it’s from a live audience.

Canned laughter was used in some shows that were set up like single-camera dramas before network executives understood that you could actually make a comedy that way. MASH and some episodes of Sports Night are examples. In those cases, the laughs are added in post-production and the actors do not hear them.

Another case will be when a live-audience sitcom has to do some location shooting. In that case, there obviously can’t be an audience, so the actors won’t hear anything. Sometimes they’ll use a laugh track; other times they’ll play the prerecorded scenes for the audience on monitors and record their actual laughs.

Sometimes a joke just isn’t that funny, and they’ll add some more laughs to “sweeten” the audience in post production. That’s fairly rare, though. Most audiences are cooperative and will laugh on cue if you hype them up enough.

Very few sitcoms use actual canned laughter (laugh track). Most of the time, if you hear laughter, it’s from a live audience.

Actually, they do. Even when taped before a live audience, a laugh track is added later; audience laughter is hard to get right live.

Are there any currently airing sitcoms not filmed/taped with a live audience and use canned laughter?

I tried to watch an episode of “The Big Bang Theory” and assumed it was 100% canned laughter. I was surprised to be informed that it was recorded with a live audience. They must use a lot of canned laughter to sweeten that show before broadcast, because I heard gales of laughter for things that weren’t even remotely funny.

Not funny to you maybe, they may have been funny to others.

There’s also something about the energy and anticipation of being in an environment like that that makes things funnier (in a literal LOL way) that might not be if you’re home alone on the couch. I’ve been in several different sitcom audiences, and sometimes they do multiple takes, which means the surprise of the humor is lost, but the laughter remained because there is a genuine connection with live performers and a group mentality that makes things funnier than you might think otherwise.

Actually, they do. Even when taped before a live audience, a laugh track is added later; audience laughter is hard to get right live.

Like I said, this is done some of the time, but the vast majority of audience laughs are not “sweetened.” There is certainly some editing and tweaking going on, but mixing canned laughter with an audience track is rarely necessary. The audience has been trained to laugh loud and fast by the time the taping starts.

(I recommend attending a sitcom taping if you’re ever in LA. It’s a fascinating process to observe, even if the show is crappy.)

Cite: I have done consulting for TV post-production vendors and observed the editing process of several sitcoms.

On the subject of Big Bang Theory having a live studio audience, this was pretty cute

Not funny to you maybe, they may have been funny to others.

Well thanks. I guess my sense of humor is a bit more sophisticated than the average.

Do they actors hear the canned laughter?

If you’re asking whether or not if, back in the laugh track days, the sets ever had playback of canned laughter after punchlines to help the actors with their performances, I’d take an educated guess and say undoubtedly no. Part of being a professional (film or TV) actor is learning to perform without that kind of feedback.

In a great documentary about the movie *Caddyshack *they said that when they first started shooting Rodney Dangerfield, who’d only done stand-up and hadn’t been in a film yet, got discouraged early on because after the first couple of takes the crew would be stoned-faced after his jokes. They had to explain to him that’s just how it works in film.

Here’a a Ken Levine (who has a little bit of TV experience) blog post on the subject: 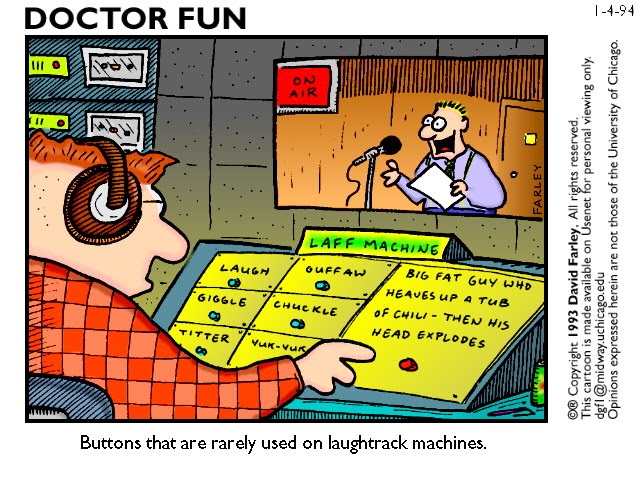 One point he makes that isn’t necessarily obvious is that when multiple takes are needed for a scene the best one may be the fourth time the audience saw it, so they may not be laughing much any more.