A few years ago, NBC started broadcasting premier league games. As promotion, they ran a series of ads about an American football coach named Ted Lasso who had for some reason been hired to manage Tottenham. Pretty funny fish-out-of-water stuff. Fine.

Now Apple TV has turned this into a series. It seems like an insane idea for a show, but I watched the first few and it actually seems… really good? It’s funny, and somehow earnest and endearing without being sappy.

Anyway, the trailer is here, and the first few episodes are up on Apple TV+.

I’m through the first 7 episodes (the 8th and final episode is available on Friday).

This is a really good show. The commercials were hilarious, but I thought this was going to be terrible idea. At the very least, I was expecting mini-episodes of 11 minutes each, with some easy fish-out-of-water jokes, and that would be it. But borchevsky is right - it’s legitimately funny, is heartwarming without being sappy, and has great characters. It’s entirely implausible, but it’s a comedy.

I haven’t watched episode 7 yet, but the other new episodes have continued to be really good. I really recommend people give this series a try, even in the premise seems like it shouldn’t work.

I’m pretty sure the first season will be 10 eps in total, not 8.

One bump to say that the entire first season is now available, and it’s great all the way through. Lots of funny bits, and plotting that’s surprising but still makes sense for the characters. Give it a try if you can. I’d say watch up through ep 4 to get a good feel for the show, although my favourite eps are later on.

We also fell in love with this show. So much so that we are debating keeping Apple TV beyond the free year we got.

I find the earnestness and general good feelings from Ted Lasso to be utterly refreshing compared to the current trend in television entertainment. Also, the jokes themselves have a finesse that I appreciate. There are times where I have to think through what they are saying before I get the joke. My favorite from last night’s season finale:

One of the best shows I’ve seen all year. I didn’t have high hopes, but it blew me away. A feel good show in every aspect of the words. I love how they made Ted a consistently optimistic person but unlike other shows with super positive people, he’s highly intelligent as well. 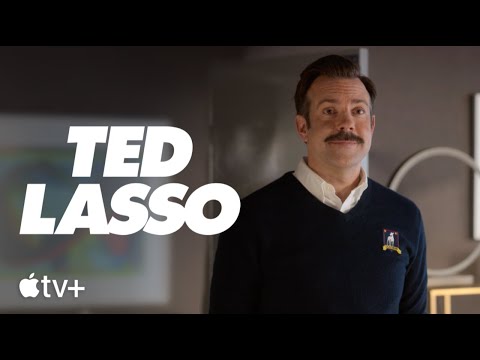 I’m excited for the new season. I hope it isn’t a disappointment. Season Twos don’t have a great track record in general for TV shows.
Our free Apple TV expires in June I think. Apple isn’t dumb. I’m willing to cough up money based on the greatness of season one.

“The happiest animal in the world? It’s a goldfish. Has a ten-second memory. Be a goldfish, Sam.”

I need to try this. Any one little thing sits with me for days.

Watching series a second time. Can’t wait for next Friday.

My wife and I adore this show. We’ve watched the whole thing three times and can’t wait for the new season.

Early reviews are starting to come in. General consensus is very positive, that the show continues to manage its magical balancing act, staying positive and optimistic and affirmational without tipping over into sap.

I debate with myself about which S1 episode is my favorite. I think it’s probably the one where they exorcise the ghosts. It has everything.

I’m pretty excited to see S2 as well. However, my Apple TV+ subscription ends at the end of this month. So I think I’m going to just wait until August and resub for a month (catch up and then rewatch the last few as they air)

I debate with myself about which S1 episode is my favorite. I think it’s probably the one where they exorcise the ghosts. It has everything.

I think I could probably be convinced that any one of episodes 3 - 9 is the best. We rewatched the series and I think there were about a dozen times I said that a scene was my favorite

I might vote for Diamond Dogs as my fave.

I stumbled across this show last night and binged the whole damn season in one sitting. Agree with everyone above. Great show. I really enjoyed watching Rebecca’s and Kelee’s friendship develop.

I’m currious where they’ll go with season 2. Now that Ted has won the team over, the whole premise seems moot.

I’m currious where they’ll go with season 2. Now that Ted has won the team over, the whole premise seems moot.

They have to get back into the Premier League. It’ll be all about rallying and gaining back their confidence in themselves. I imagine in real life being relegated down to a lower league is heartbreaking.

Agreed. If the show gets renewed for any further seasons, it wouldn’t surprise me if they have a season where the story arc is AFC Richmond pulling off a Leicester City and winning the whole league.

It’s been renewed for a season 3, and they’ve said they’ve scripted it for that to be the conclusion.

The first episode is a hoot. The show hasn’t lost a step at all. In some ways, actually, they find a couple of new gears.

Solid first episode of season 2. Some good lines and setting up the storylines for the season.

By the way, what does it usually take to get into the promotion spots? They said Richmond have 7 draws so far - probably you usually need more like 2 points per game to go up?

It all depends on how the league shakes out in that particular year. If Richmond go on a big winning streak, it wouldn’t be out of the question for them to quickly get into contention.

The top two teams in the Championship automatically are promoted to the Premier League. This past season, those were Norwich City and Watford, who accumulated 97 and 91 points (out of a total of 138 possible). It may also be the case that the show will have Richmond end up in the play-offs (the 3-6 finishing teams in the Championship have a playoff tournament; the final winner of it is the third and final team that goes to the Premier League for the next season).